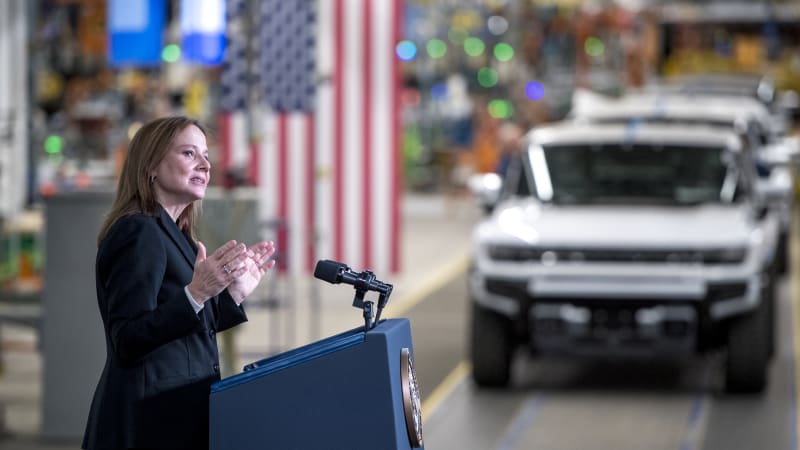 DETROIT — The CEO of General Motors said Thursday that the automaker learned valuable lessons last year when it stepped in to boost emergency production of ventilators to treat severely ill COVID-19 patients.

The company was able to help a small West Coast ventilator maker start large-scale production in about a month. That gave GM the confidence that it could speed up other tasks, such as bringing electric and other vehicles to market faster, CEO Mary Barra said.

“Doing the ventilator project was kind of a game changer from a General Motors perspective, from a culture-change perspective,” Barra said in a wide-ranging conversation with members of the Automotive Press Association of Detroit.

Barra said that in the past, the GM management team would have resisted when told they needed to help a company that builds 250 ventilators per month accelerate production to 30,000 in 150 days.

“They would have looked at me like I was crazy,” she said.

Instead, employees approached the problem as if their loved ones might need the breathing machines, and accomplished the goal, Barra said. Still the company was accused by former President Donald Trump of moving too slowly.

In March of last year, GM put hundreds of workers on the project to help Ventec Life Systems of the Seattle area ramp up its production at a time when there were fears that the country would run short of the breathing machines.

GM put up capital and converted an electronics factory in Indiana to help make the ventilators with a speed that one supply chain expert said was “lightning fast.”

Barra said the company now uses the same approach for its own electric vehicles, software, and partially automated driver-assist systems. The company, she said, is “days away from getting the Hummer into the first customer’s hands.”

Also at the event, Barra gave a strong hint that Michigan may get an electric vehicle battery factory. When asked if the state has a chance to get a plant, she said discussions are ongoing.

“In the not-too-distant future, we’ll be able to answer that question,” Barra said, adding that it an announcement would likely come in weeks, not months.

Barra also took a mild shot at Tesla and its CEO, Elon Musk. When asked about Musk’s criticism of a Biden administration plan to give bigger tax credits to buyers of union-made electric vehicles, she said it’s much more difficult to build cars for the broader mass market versus selling luxury vehicles to a slice of buyers.

in a veiled dig at Musk’s levels of hyperbole, she said, “I’m not going to get into a match on that type of stuff because I actually mean what I say and say what I mean. When I say something, I really mean it and I’m an engineer, so I am going to execute it.”

She said GM’s stock is undervalued when compared with Tesla, Rivian, Lucid Motors, all relatively new companies with big market valuations that focus solely on EVs.

“Sometimes the iconic, traditional company, even though they’re innovating quickly, gets looked at with a different lens,” she said.

Barra also said she doesn’t think GM will return to having huge stocks of vehicles on dealer lots, now that it has managed through a global computer chip shortage with lower inventory. While there are some customers who want to buy a vehicle immediately, others want to order online and avoid going to a dealership, and GM will serve them both, she said.

Her comments came after the company announced two more steps to make sure it has raw materials for the transition from petroleum to battery power. The company announced a deal with MP Materials to supply rare earth metals and finished magnets for the electric vehicle motors from a new factory to be built in Fort Worth, Texas, starting in 2023.

It’s also negotiating what is likely to be a joint venture with Vacuumschmelze (VAC) of Germany to build a U.S. factory to make electric vehicle motor magnets. Production is to start in 2024 and will create “hundreds of new jobs,” the companies said.

The companies didn’t announce financial terms of the deals. Shilpan Amin, GM’s head of purchasing and supply chain, said it has a parts supply agreement with MP Materials with no GM capital investment. The capital structure of the venture with VAC is still being worked out, but the companies said they would build a plant together.

At present there are no factories in the U.S. equipped for large-scale production of electric vehicle motor magnets, Amin said. MP said 90% of the supply now comes from China.

The moves come as automakers scramble to line up parts supplies for what is expected to be a dramatic shift from internal combustion engines to zero emission electric power during the coming decade. GM, for instance, has a goal of selling only electric passenger vehicles by 2035.