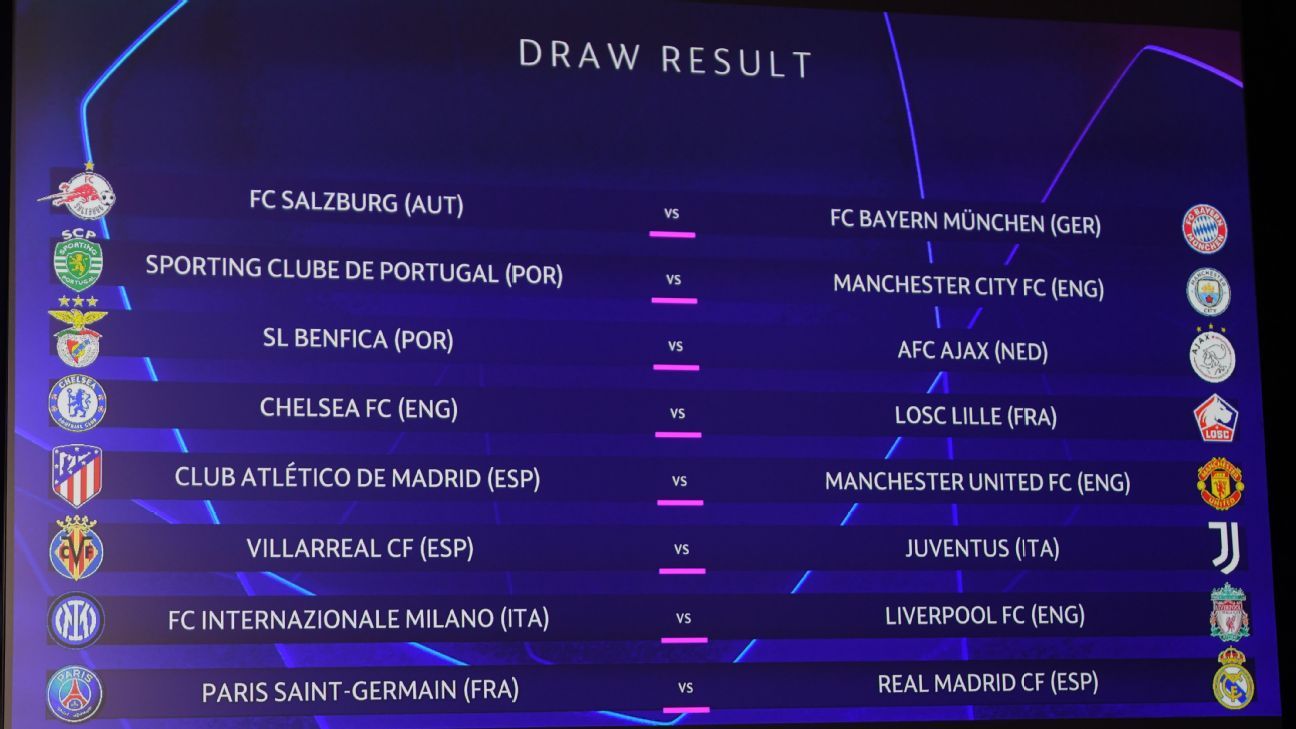 Paris Saint-Germain must win the Champions League the hard way after being paired with Real Madrid in the redrawn round of 16 on Monday, following a software error that led to the initial draw — which had PSG facing Manchester United — being declared void by UEFA.

PSG, still attempting to win the Champions League for the first time, will face 13-time winners Real over two legs next February and March in the tie of the round. And although the second draw saw them avoid a clash with Mauricio Pochettino’s PSG and a Lionel Messi vs. Cristiano Ronaldo head-to-head, United fared little better in the redraw, landing Spanish champions Atletico Madrid for the first meeting between the two clubs in the competition.

But while PSG vs. Real and Atletico vs. Man United stand out as the most eye-catching ties of the round of 16, Liverpool‘s encounter with Inter Milan is a much tougher task for Jurgen Klopp’s team than their initial pairing with FC Salzburg.

With the controversy of the voided draw now resolved by the second draw, the leading contenders to win this season’s Champions League can now start to plot their route to the final in Saint Petersburg on May 28. Much can change between now and February, when the Champions League resumes, but with the round of 16 fixtures now on the schedule, which clubs will make it through to the quarterfinals?

There was never going to be an easy option for Austrian champions Salzburg, but having been spared a tie against Liverpool because of the voided first draw, they ended up with Bayern Munich.

Making their first appearance in the round of 16 after finishing as runners-up in Group G, Salzburg will be huge underdogs against the Bundesliga champions, who cruised into the knockout stages with six wins out of six in their group. Karim Adeyemi, a 19-year-old Munich-born forward, has scored four goals so far in this season’s competition for Salzburg and will be out to impress against his hometown club. U.S. international midfielder Brenden Aaronson is another key figure for Salzburg, having played in every UCL game this season.

Reaching this stage is the big achievement for Salzburg, and it would be the biggest upset of the competition — bigger even than Sheriff Tiraspol‘s group-stage win at Real Madrid — if they eliminate Bayern. Julian Nagelsmann’s team were the favourites to win the Champions League before the draw was made, but they will be even stronger favourites now.

WHO GOES THROUGH? Bayern Munich

Sporting qualified for the round of 16 by denying Borussia Dortmund the runners-up spot behind Ajax in Group C, with a 3-1 home win against the Bundesliga team proving crucial. Ruben Amorim’s team have exceeded expectations by reaching this stage, however, and they are likely to be beaten comprehensively by City, who will ruthlessly exploit the Portuguese champions’ defensive weaknesses.

Sporting conceded nine goals in two games against Ajax, and City have far greater firepower than the Dutch champions. Midfielder Pedro Goncalves, with four goals in four UCL games, will be a threat for Sporting, as will centre-forward Paulinho, but this is a tie that will suit City, and it’s difficult to foresee any problems for Pep Guardiola’s team.

The only potential downside for City is that it will be a return to Estadio Jose Alvalade, where they suffered a surprise quarterfinal exit against Lyon during the COVID-19-affected final stages in 2020. Beyond a possible unlucky omen, there is nothing for City to worry about.

WHO GOES THROUGH? Manchester City

This will be an intriguing tie between Erik ten Hag’s exciting Ajax team and a Benfica team, once again coached by Jorge Jesus, that sent Barcelona crashing out at the group stage. Having won all six games in Group C, Ajax will go into this tie as favourites to reach the quarterfinals, though Benfica will be well-organised and confident of victory themselves.

Benfica’s experience could be the crucial factor, with the likes of Jan Vertonghen, Nicolas Otamendi, Joao Mario and Rafa Silva all likely to be key men against Ajax. Striker Darwin Nunez will test Ajax, too. And despite their perennial reputation for fielding young sides, Ajax also have veterans who will play a big part in the outcome of the tie with the likes of Daley Blind, Davy Klaassen and Dusan Tadic.

If Otamendi and Vertonghen can keep Sebastien Haller — this season’s leading UCL scorer, with 10 goals — quiet over the two legs, Benfica will have the edge. It is a close tie to call, but don’t underestimate Benfica.

WHO GOES THROUGH? Benfica

Chelsea could have faced Bayern, Real Madrid or Ajax in the round of 16, but they pulled Lille out of the hat in both the voided draw and the real one — a nice bit of good fortune for last season’s Champions League winners. Having finished second in Group H behind Juventus, it could have been much worse for Chelsea, but coach Thomas Tuchel will expect his team to overcome the French champions.

Although Lille were the group winners whom most of the second-placed teams would have wanted to face, they remain a dangerous opponent. Despite losing coach Christophe Galtier to Marseille following last season’s Ligue 1 title success and having a tough time domestically this season, Lille have saved their best performances for the Champions League. Canada striker Jonathan David has scored three goals in six group games for Lille, while U.S. international Timothy Weah has appeared in four games so far.

Lille are a young team with potential, but Chelsea’s experience and quality are likely too much for Jocelyn Gourvennec’s team.

WHO GOES THROUGH? Chelsea

These two European heavyweights have been paired together just once before in UEFA competition, with Atletico beating United 4-1 over two legs in the European Cup Winners’ Cup second round in November 1991; this clash marks a new chapter in the Champions League for two clubs.

Diego Simeone’s Atletico have made an unconvincing start to the defence of their Spanish title and sit fourth in LaLiga, 13 points behind leaders Real Madrid. They also snatched qualification on matchday six with a win against Porto that took them from bottom of Group B to second, behind Liverpool.

Atletico are unpredictable, with Antoine Griezmann, Luis Suarez and Joao Felix being capable of hurting United if they perform to their best. But United are also a tough team to work out this season, with Ole Gunnar Solskjaer sacked and replaced by interim manager Ralf Rangnick in November. They have the goals of Cristiano Ronaldo, the pace of Jadon Sancho and Marcus Rashford and the flair of Paul Pogba and Bruno Fernandes, but are susceptible in defence.

This tie could ultimately come down to the goalkeepers, Atleti’s Jan Oblak and United’s David de Gea, the latter of whom will face his old club for the first time since moving to Old Trafford in 2011. If Rangnick can get United to click between now and February, they should win a close tie.

WHO GOES THROUGH? Manchester United

Europa League champions Villarreal booked their place in the round of 16 with a weather-delayed victory against Atalanta in Bergamo on matchday six, but Unai Emery’s team have developed a habit of leaving it late to win.

Their penalty shootout victory over Manchester United in last season’s Europa League final earned them a place in the Champions League, and that win, combined with their performances in the group stages, proves Villarreal’s durability. Although they are inconsistent, Villarreal are well-organised under former Arsenal coach Emery, and they will be a tough opponent for a Juventus team that has struggled for form this season.

Janusz Michallik debates whether Juventus are good enough to win the Champions League after their win over Malmo.

Juventus were well-beaten by Chelsea at Stamford Bridge in the group stage, and they struggled to 1-0 wins against Malmo and Zenit on the way to topping Group H. Massimiliano Allegri has the better squad, and forwards Paulo Dybala, Alvaro Morata, Moise Kean and Federico Chiesa should give Juventus the edge.

This will be a hard-fought tie, and Villarreal know how to get the job done in Europe; of all the last-16 matches, this one could go all the way to penalties.

WHO GOES THROUGH? Villarreal

Liverpool made it six wins out of six in Group B with a matchday six win against AC Milan at San Siro, but the 2019 Champions League winners can expect a tougher time against Inter.

Jurgen Klopp’s team will be strong favourites against Simone Inzaghi’s team, but Inter have more quality than AC in terms of taking advantage of any opportunities that Liverpool may present. Lautaro Martinez and Edin Dzeko will be a threat up front for Inter, and they have experience in midfield with Nicolo Barella, Arturo Vidal and Marcelo Brozovic. Meanwhile, Samir Handanovic continues to be one of the best keepers in Europe.

Over two legs, Inter could make life difficult for Liverpool if Klopp’s squad is hit by injuries ahead of the tie. But while the Italian champions have the ability to hurt Liverpool, it would be tough to predict an Inter win at this stage.

Liverpool will know they have been in a game, but they have so much depth that it would be a shock if they failed to make it through.

WHO GOES THROUGH? Liverpool

It’s the tie that neither club wanted, but it’s the price that Mauricio Pochettino’s PSG had to pay after finishing as runners-up in Group A behind Manchester City. This is a huge clash between two clubs that simply will not accept elimination at the round of 16, and it means one of the favourites for the competition will crash out.

It is a clash between Real’s pedigree and winning mentality, albeit with a team that’s relying on the experience of Karim Benzema and Luka Modric, against a PSG side with Lionel Messi, Neymar and Kylian Mbappe forming arguably the best strike-force in the game. It throws up so many reunions, too, with Real coach Carlo Ancelotti up against his old team and Sergio Ramos, Angel di Maria and Keylor Navas set to face the club where they previously enjoyed repeated Champions League glory.

The last time these teams met in Paris, PSG won 3-0 in the 2019-20 group stage, and they will need a victory to take to Madrid for the second leg. But this one is almost too close to call because both sides have weaknesses that can be exploited. It’ll be a case of which team is in the best form by the time the game comes around, but at this stage, PSG’s attacking depth makes them favourites.

WHO GOES THROUGH? Paris Saint-Germain