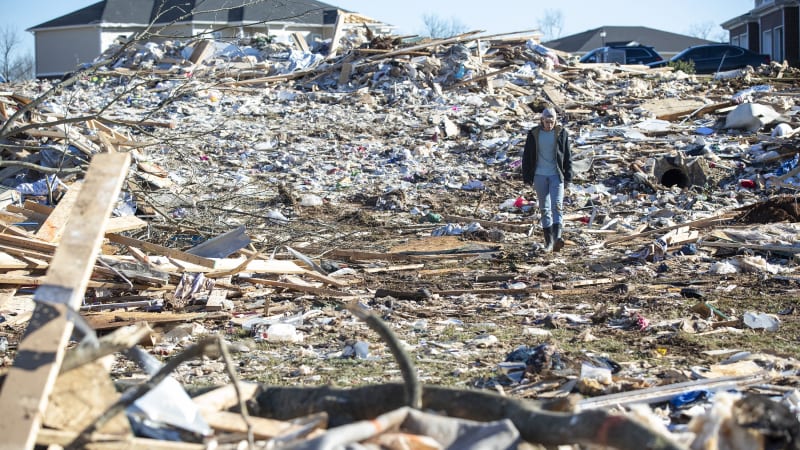 A man walks through the wrecked remains of houses struck by a tornado in Bowling Green, Ky. (Getty Images)

A number of tornadoes swept through portions of six states in the U.S. Midwest and South over the weekend. After one of the twisters landed in Kentucky and traversed 227 miles on the ground, killing more than 50 people, Governor Andy Beshear said his state suffered “the worst, most devastating tornado event in Kentucky’s history.” The storms also made their presence felt at the GM Bowling Green Assembly Plant that builds the Chevrolet Corvette, and the National Corvette Museum in Bowling Green, Kentucky. In addition to weather damage, a fire started at the assembly plant, which one resident caught on video. All of the plant employees are safe, but the damage is bad enough to compel Chevrolet to call off production for this week.

GM Authority reports the UAW Local 2164 shop chairman sent a note to plant employees saying that a UAW team was assessing the damage, GM telling Automotive News that an employee entrance and the roof have been affected. This is yet another interruption for the plant, which can’t seem to catch a break, running behind on C8 Corvette production since it started building the car. In June, a parts shortage caused a short pause of the lines. In July, Tony Johnson, Chevrolet’s director of car and crossover marketing, said the Bowtie was “not even close” to catching up to demand for the only product it makes. In October, GM briefly idled the plant to give a supplier time to catch up on parts. At the beginning of November, GM had to cut a shift due to a parts shortage. All of those issues have been separate from the microchip woes.

The automaker is aiming to restart production on December 20. As for the National Corvette Museum, a photo at Corvette Action Center shows one large garage with its roof torn off, and two other garages with serious roof damage. The museum’s home page advises, “The NCM Motorsports Park has sustained significant damage to the property and all events, including Twinkle at the Track, are canceled until further notice.” A note on the museum’s Facebook page says the museum itself “was spared from significant damage,” and it appears to be open again.

The plant and museum appear to have got off lightly compared to wider Bowling Green, though. Drone footage of the city by station WHAS shows devastation, Mayor Todd Alcott giving an interview to ABC News in which he laid out just how bad it got for some residents.