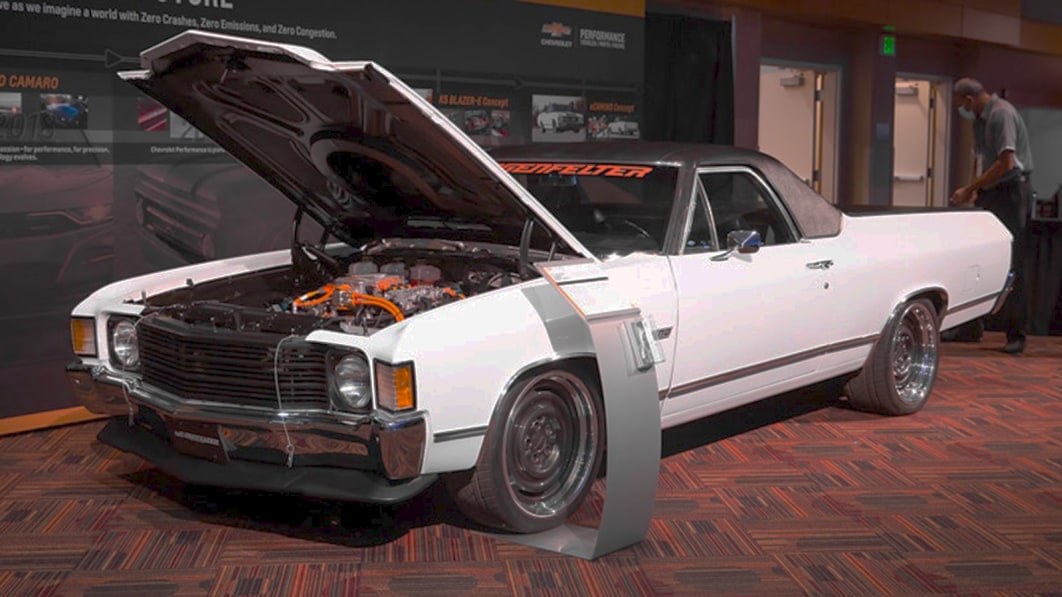 Ever since its E-10 pickup truck concept from 2019, Chevrolet has been teasing a complete electric powertrain conversion kit for classic cars. It’s called the Connect and Cruise eCrate, it shows a lot of promise, and it has been featured in various forms with subsequent concepts. Finally, it seems the system is approaching reality with this latest concept, the 1972 Chevy “eL Camino,” which was spotted by Engine Swap Depot.

There are two important notes about this concept. One of them is that this conversion wasn’t built by GM in-house. Instead, GM’s partner, Lingenfelter Performance Engineering, put it together. Last year, it was announced the aftermarket company known for high-performance internal-combustion Chevy models would be one of the first to be a certified eCrate installer. According to information from its display at the Performance Racing Industry show shared on Lingenfelter’s Facebook page, the build was a key part of developing the installation procedures for future installers.

The eL Camino seems to be built very similarly to the K5 Blazer concept from last year. According to Engine Swap Depot, it uses the same kind of 200-horsepower Chevy Bolt motor hooked up to a 4L60E four-speed automatic transmission. The 66-kWh battery pack is mounted in the bed, while the motor, cooling systems and other electronics are placed under the hood.

The other important part of this concept is that we have a revised launch window for the retail kit. According to Lingenfelter, the eCrate system will go on sale in the first half of 2022, slightly later than the previous estimate of the second half of 2021. We reached out to Lingenfelter to see if they had any details on pricing or kit components, but they weren’t able to give us any at the moment. A representative from General Motors told us that more details are coming next year including pricing, parts included and driveline applications. Chevrolet has previously said that it will sell the eCrate kit through dealers for DIY-ers as well as certified installers such as Lingenfelter.

Update: General Motors noted that more specifics on the eCrate are coming next year.

Nestlé offers cash to cocoa farmers to keep kids in school in $1.4B sustainability push

We need to be united to thwart nefarious designs of enemy force: COAS Bajwa