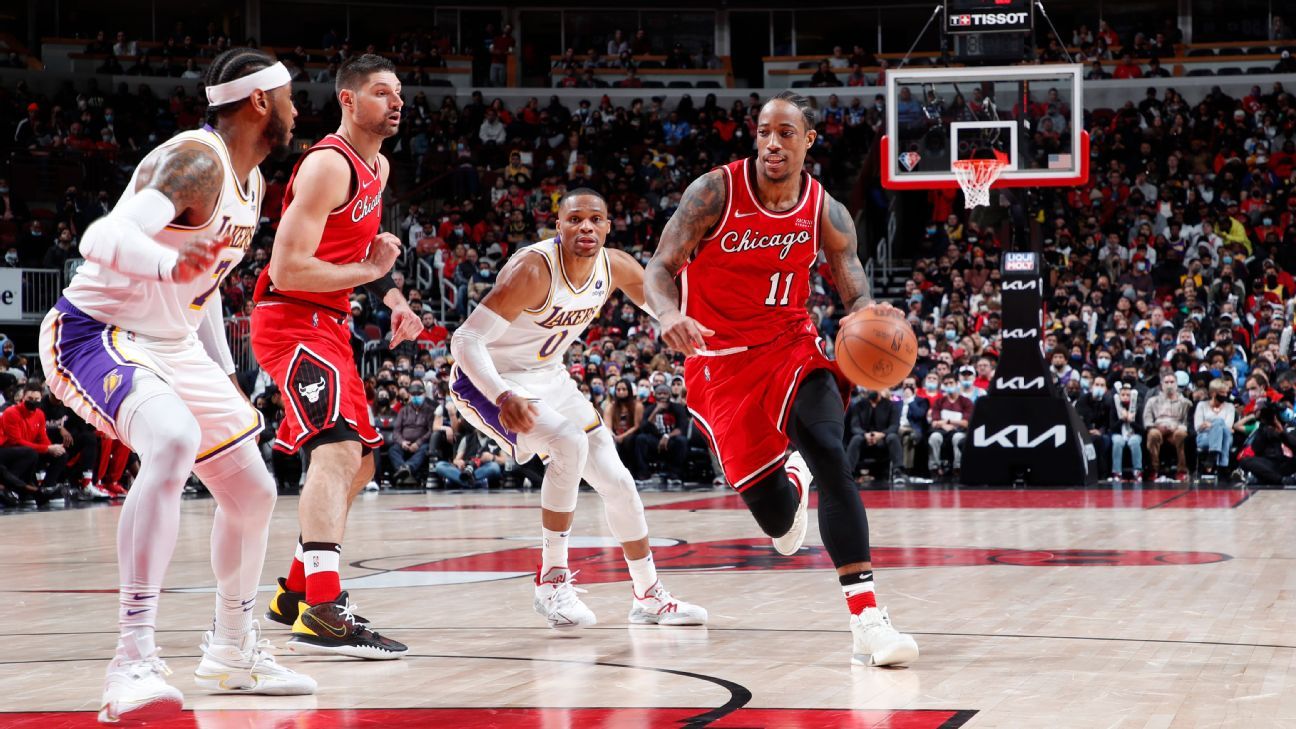 CHICAGO — In his first game in more than two weeks after clearing the NBA’s health and safety protocols, Chicago Bulls star DeMar DeRozan matched a season-high with 38 points, including 19 in the fourth quarter, to lead the Bulls to a 115-110 victory over the Los Angeles Lakers on Sunday night at the United Center.

DeRozan was playing in his first game since Dec. 4, and the Bulls were playing for the first time in more than a week after having two games postponed amid a team COVID-19 outbreak. Although DeRozan was one of the 10 Bulls players who landed in the league’s protocols, he did not experience any symptoms from the virus.

Instead, he spent most of his time in quarantine managing boredom — stretching, jumping rope, doing pushups — whatever he could to stay active. DeRozan was raring to get back on the court so badly that immediately after getting cleared from his 10-day quarantine, he said he went to the Bulls practice facility to put shots at 1:00 a.m.

DeRozan was one of four Bulls players who cleared the league’s health and safety protocols to play Sunday night, including Coby White, Javonte Green and Derrick Jones Jr., who did not return after halftime with a left hamstring injury. In addition to his late-night shooting session, the Bulls had one practice as a team the day prior, but DeRozan still picked up where he left off from the start of the month.

He finished 11 of 24 shooting overall on Sunday and knocked down 16 of his 17 attempts from the free-throw line to go along with six assists and four rebounds.

“When the ball is in his hands, there’s just a calmness to him,” Bulls coach Billy Donovan said. “He doesn’t get rattled. He’s been in so many of these moments throughout his life and his career. I think things slowed down for him. He knows exactly what he has to get done, what needs to get done and he finds ways to just stay totally locked in. It’s really an incredible gift that he has.”

Donovan wanted to be cautious of DeRozan’s workload in his first game back from an extended absence, but with Bulls star Zach LaVine among the list of players still in the health and safety protocols, DeRozan said he knew he had to pick up the slack.

He went 7 of 11 shooting in the fourth quarter, including knocking down a go-ahead jumper with 52. 6 seconds remaining. His 19 fourth-quarter points were the most in his career.

“The fact that he utilizes the midrange, a lot of people want to kind of discredit that part of the game, but I think that’s a lost art,” Lakers forward Carmelo Anthony said. “DeMar is one of the guys who’s mastered that. And at the end of the game, when you gotta slow down and you gotta run something, 3s are not falling, you gotta be able to get to that. He mastered that. He mastered his spots on the court. I think that’s why he’s very efficient, especially this season, in the fourth quarter, specifically down the stretch.”

Anthony has seen it first hand since DeRozan has been at his best this season against the Lakers — his two highest-scoring games this season have both come against L.A. DeRozan, who is from Compton, California, has acknowledged that he had an interest in signing with his hometown team during the offseason before Los Angeles ultimately traded for Russell Westbrook.

DeRozan was asked after the game whether that was a coincidence.

“You think it’s a coincidence?” DeRozan said with a smile. “Nah. I don’t know. It may be.”