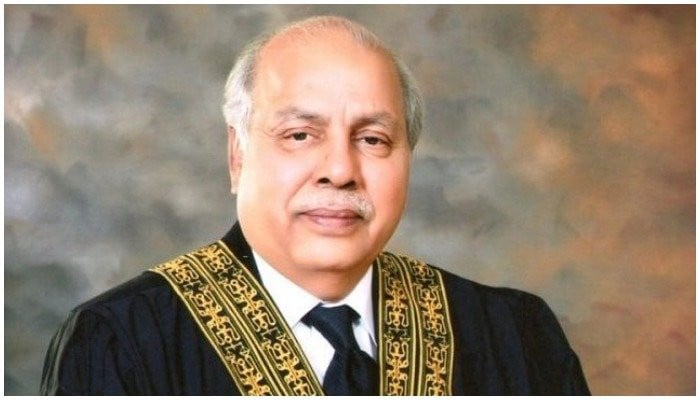 KARACHI: Chief Justice of Pakistan Gulzar Ahmed came down hard on the Karachi commissioner after submission of the demolition report on the Nasla Tower in Karachi.

The chief justice was heading the court proceedings on Nasla Tower’s demolition case at the Karachi registry of the Supreme Court Wednesday.

“How many buildings have been demolished? How much work has been done? Tell us,” CJP Ahmed asked the Karachi commissioner.

The commissioner informed the court that authorities have started the operation to demolish Nasla Tower.

“Do not lie,” the CJP responded angrily.

“Sir, please listen to me,” the Karachi commissioner started.

“Are you in your home right now? Is this the way to speak in court?” asked Justice Qazi Amin. “Do not try to act smart,” he warned the commissioner.

“Sir, I am trying to demolish the building,” responded the commissioner.

The CJP then asked the advocate-general what grade the Karachi commissioner falls under.

“He is a grade-21 officer,” responded the advocate-general.

“Is this the way a grade-21 officer speaks in court?” asked CJP Ahmed.

“Sir, I am trying to make you understand,” stated the commissioner.

“Stop trying. You will go straight to jail from here,” the CJP warned. “We are understanding [the situation] but you aren’t. You are only passing the time,” he said.

The chief justice then remarked that authorities have not even brought down the Tijori Heights building.

“The demolition process of Tijori Heights is underway,” responded the commissioner.

“If the operation is underway, submit a report on it by afternoon, with pictures [as evidence],” replied the chief justice.

Shortly after the hearing of the case concluded, Karachi Commissioner Iqbal Memon arrived at the Nasla Tower to oversee the demolition work.

Iqbal arrived at the location with several other officers and Assistant Commissioner Revenue and DC East.

“Nasla Tower’s demolition work had begun,” said the commissioner. “It had been halted as precautionary measures were not being taken,” he said, adding that the apex court had issued orders to ensure lives were not lost in the demolition process.

He revealed that the 10th floor of the Nasla Tower had been demolished while work was underway on the 11th floor. “The Supreme Court has directed me to speed up the demolition process. It will be done,” he said.

Memon said that the demolition of the tower, from the inside of the building, is underway. “The process to demolish the tower from the outside will begin during the evening,” he added.

He said Nasla Tower will be brought down in the “traditional way”, through the use of machines and labourers, adding that he was previously confused whether the building should be brought down via controlled blast or not.

The walls of the parking and basement areas are being torn down through heavy-duty machinery, while labourers are working on pre-demolition works.

In the initial phase, the walls of the parking area — which face Shahrah-e-Faisal — are being torn down and the rubble inside the building will be taken out, authorities told Geo News.

Demolition work on Nasla Tower stopped due to safety concerns

The Sindh Building Control Authority (SBCA) on Monday initiated the pre-demolition work of the Nasla Tower on the directives of Karachi Commissioner Muhammad Iqbal Memon.

However, soon after the commencement of the partial demolition work, Ferozabad Assistant Commissioner Asma Batool stopped it on the grounds of safety concerns.

“The demolition process has been stopped for a while because of the safety concerns of the passers-by,” she had said, adding that huge blocks fell on the road during the demolition of the building.

She had said that without proper safety measures, no demolition could take place because it could cause damage to human lives. After consulting with the high-ups, the demolition work would resume, she added.

Earlier, the anti-encroachment police of the Sindh Board of Revenue cordoned off the building, following which the SBCA’s demolition squad kicked off the pre-demolition work. District East Deputy Commissioner Asif Jan Siddiqui told the media that the tower’s doors and windows were being removed. He had said the anti-encroachment police had been summoned to maintain law and order in the area.

“Initially windows, doors and other small removal of the building parts will take place,” Siddiqui had said, adding that there had not been any decision regarding the issuance of a tender for the proper demolition of the building.