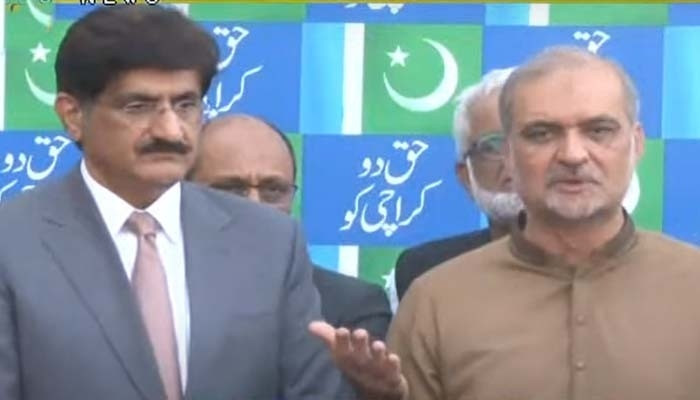 KARACHI: Chief Minister Murad Ali Shah on Wednesday said the local body law was passed in a “hurry”, stating that the PPP-led provincial government had to present the law to the Election Commission of Pakistan (ECP) before November 30, Geo News reported.

Addressing a press conference flanked by Jamaat-e-Islami (JI) Karachi leader Hafiz Naeemur Rehman, the CM Sindh said that Sindh Minister for Local Government Nasir Hussain Shah talked to the political parties for amendments in the Local Government Act of 2013 and contacted the stakeholders.

“Nasir Shah wrote letters to the parties for their suggestions before drafting the law,” he added.

The CM said that JI demanded a of health and education institutions to the local government, adding that the Karachi Water and Sewerage Board (KWSB) needs provincial government’s support.

Talking about the sit-in staged by the JI, Shah said that the party came up with a political and democratic solution.

“Sindh is the only province to pass the Local Government Act in the assembly.”

On January 28, the JI announced to call off the sit-in after almost a month in Karachi as the negotiations with the Sindh government bore fruit in connection with the law governing the Local Governments.

JI’s Karachi leader Hafiz Naeemur Rehman said the sit-in continued for 29 days for the resolution of the issues the megacity faced.

The JI and the provincial government has drawn up a written agreement, according to which the Local Bodies’ institutions regarding health and education will again be handed over to the Local Bodies, said Sindh Minister for Local Government Syed Nasir Hussain Shah.