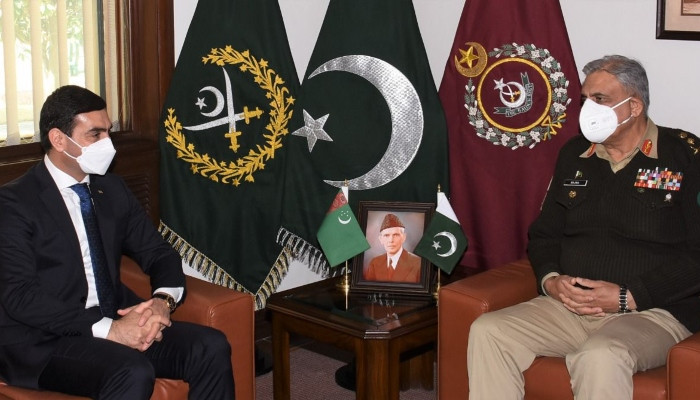 According to the military’s media wing, the meeting discussed matters related to bilateral cooperation in various fields with special emphasis on regional connectivity projects and Turkmenistan-Afghanistan-Pakistan-India (TAPI) pipeline.

Highlighting the issue of the humanitarian crisis in Afghanistan, the visiting dignitary appreciated Pakistan’s role and its efforts for regional stability. The minister also pledged to make better relations between two brotherly countries.

Meanwhile, the Canadian High Commissioner to Pakistan Wendy Gilmour held a meeting with the COAS to discuss the Afghan situation, including matters of mutual interest between Pakistan and Canada.

During the meeting, bilateral cooperation in various fields, the overall regional situation, including Afghanistan, came under discussion.

“Pakistan desires to maintain the tradition of bilateral engagement and wish for long-term and multi-domain enduring relationship with Canada,” said Gen Bajwa.

Talking about the sports in Northern Areas, the COAS appreciated special efforts taken by the Canadian High Commissioner for the promotion of sports.

On the other hand, the commissioner appreciated Pakistan’s role in the Afghan situation and efforts for regional stability, pledging to play her role for further improvements in diplomatic cooperation with Pakistan at all levels.