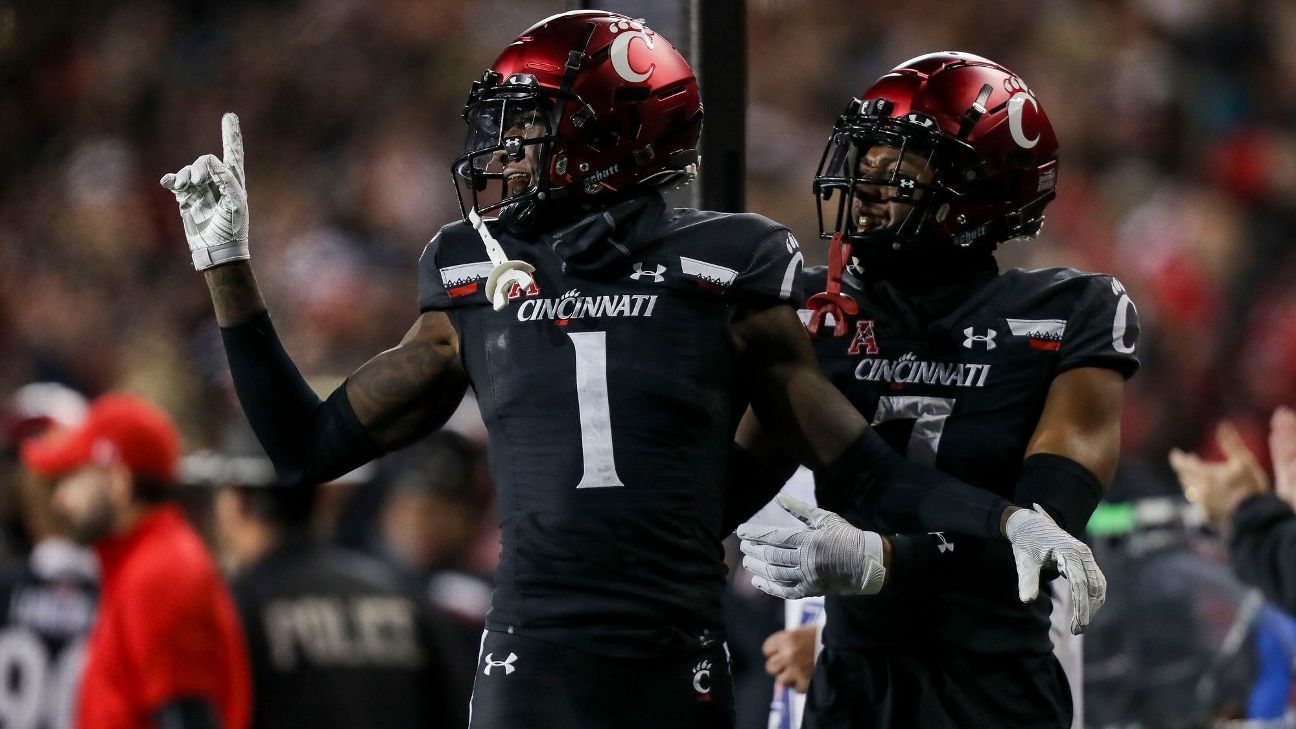 There’s not a more accomplished pair of corners in the country than Cincinnati‘s Ahmad “Sauce” Gardner, the 6-foot-3, 200-pound lockdown consensus All-American, and Coby Bryant, the 6-1, 198-pound winner of the Thorpe Award as the nation’s best defensive back.

Gardner has never allowed a single touchdown catch in more than 1,000 coverage snaps since 2019, according to Pro Football Focus. Bryant has 45 career passes defended, which ranks second nationally among active players.

Together, they anchor a defense that allows just 168.3 passing yards per game (third nationally), allows quarterbacks to complete just 54% of their passes (fourth) and has nearly twice as many interceptions (18) as touchdown passes allowed (10).

In the Goodyear Cotton Bowl (Friday, 3:30 p.m. ET, ESPN/ESPN App), they’ll face an Alabama team that includes Jameson Williams, Mel Kiper’s No. 1 wide receiver and No. 8 overall prospect in next year’s draft, who caught 68 passes for 1,445 yards and 15 touchdowns this year. NFL scouts should be spellbound.

The Tide producing a star receiver is no surprise, as Alabama regularly lands the country’s best prospects and turns them into first-round draft picks. In Williams’ case, he’s a transfer from another WR factory, Ohio State, who had offers from the nation’s football powerhouses.

But the Bearcats’ corners took a much different path to stardom.

For Gardner, it took a little bit of luck and a new approach to junk food. The first consensus All-American position player in Cincinnati history and the American’s defensive player of the year started his career as a 5-10, 140-pound receiver at Detroit Martin Luther King, Jr. High School. He didn’t play corner until his junior season, when a starter was injured and coach Ty Spencer said he threw Gardner into the fire.

“We put him out there because he just is a very mentally tough individual,” Spencer said.

College coaches started asking questions, but they weren’t sure what to make of the skinny kid who had now grown to about 6 feet. As the recruiting calendar has crept earlier and earlier in prospects’ careers, an unknown player emerging at the end of his junior year almost felt too late.

“They were kind of like, ‘Man, where’d this kid come from?'” Spencer said. “It was just a situation where a lot of coaches were like, ‘Man, I wish I knew about this kid a little longer.’ I told them, ‘Believe your eyes, because the kid is just a late bloomer.'”

The coach who took a leap in 2018 was then-Bearcats defensive coordinator Marcus Freeman, along with cornerbacks coach Mike Mickens. Freeman, now Notre Dame‘s head coach (Mickens joined his staff as corners coach), also took a chance on Bryant thanks to a relationship with his high school coach, who had known Bryant since he was 5.

“Thank God for Marcus Freeman,” said Ted Ginn Sr., the father of the former NFL receiver and Bryant’s coach at Cleveland Glenville. “They kind of trusted what was being told to them. If not for them, I don’t know where [Bryant] would be.”

Bryant, unranked in ESPN’s 2017 recruiting rankings, chose Cincy over his only other offers, from Buffalo, Eastern Michigan, Kent State and Marshall.

“I told them back then that his best football was in front of him, that you can’t get the important things on film,” Ginn said. “The character part, the hard-working part, the student, the leader.”

Once at Cincinnati, Gardner and Bryant formed a quick bond.

“It’s sort of amazing that they are the dynamic duo and they feed off each other so much,” Cincinnati defensive coordinator Mike Tressel, who took over for Freeman this January, said on Tuesday. “Both are great football players, both have great football IQ, but they really balance each other out in terms of personality.

“Coby is the type of guy that’s all about business at all times. You make sure everybody in that room is locked in. Ahmad’s the type of guy who certainly on the field is locked in from start to finish but has the ability to keep the room loose, keep the defense loose, make sure we have fun as we’re preparing like professionals. I think their personalities complement each other, really help their position group, and our defense as a whole.”

Gardner, who began running track by his senior year in high school, had to put in work to put on weight once he got to college. But he still had temptations.

“It took a lot of dedication by me, because I always just like eating junk food, Wendy’s 24/7,” Gardner said. “I spend so much money on Wendy’s it don’t make sense throughout the week. But I feel like I’m able to play faster even though I put weight on. I feel like I’ve gotten bigger and faster and stronger, which is good. And it helped my technique at the line of scrimmage and down the field.”

Gardner credits Bryant, who signed a year before him as a 5-11, 150-pound corner, for helping push him.

“I saw it from day one,” Bryant said. “That’s why me and him have such a great relationship. I took him under my wing as my little brother. I saw it from the first day he stepped on campus. Just to watch his growth from day one up until now is impeccable. I actually just complimented him on that not too long ago. Just to see his body change and him getting faster, stronger, bigger has definitely been fun to be a part of.”

The two illustrate the developmental importance at a program like Cincinnati, which just this year accepted an invitation to join the Big 12, before making history as the first Group of 5 team to make the College Football Playoff.

Tressel is quick to credit Bearcats coach Luke Fickell, who previously coached Bryant’s brother Christian, a second-team All-Big Ten safety when Fickell was defensive coordinator at Ohio State in 2012, for landing and developing both players, along with the work of second-year corners coach Perry Eliano.

But he said they weren’t purely projects, backing up the faith both high school coaches had in them.

“There has to be the innate talent there,” Tressel said. “Obviously those guys have the developmental piece. A little bit of credit to Coach Fickell and Coach Eliano, but a lot of development credit goes to them and their ability to work and never be satisfied and always scratch and claw.”

Their emergence as dominant defenders allows Tressel to be aggressive up front, which will be key against Alabama.

Cincinnati gets pressure on opposing quarterbacks on 39% of dropbacks, the second-highest rate in FBS entering bowl season, according to ESPN Stats & Information. Alabama quarterback and Heisman Trophy winner Bryce Young has completed only 49% of his passes under pressure this season with three interceptions. When he isn’t pressured, he completes 76% with 27 touchdowns and just one interception.

“In our defense, what we’re able to do is based on those two guys being able to lock down their jobs,” Tressel said. “You can’t do what we do without two great corners.”

They’ll have their work cut out for them against the Crimson Tide. Alabama averages 347.9 passing yards and 42.5 points per game, while Cincinnati allows 168.31 passing yards and 16.1 PPG, ranking second nationally in passing defense and fourth in scoring defense.

Gardner facing off against Williams will be one of the most intriguing matchups of the season, including for NFL scouts. Opponents have completed just 8 of 30 passes (27%) with no touchdowns and averaged only 1.9 yards per target to receivers with Gardner as the primary defender, according to ESPN Stats & Info. Gardner has given up only 117 total receiving yards all year and allowed zero catches in the red zone, according to Pro Football Focus.

“I think the challenge here this week is going to be incredible for him because they’re not going to go away from him,” Fickell said. “There’s going to be opportunities that he’s going to have one of the best receivers in college football matched up one-on-one, and he’s going to be challenged, and for us as a defense as well, we’ve got to be smart, too. So even though he wants and loves the challenge, we’ve also got to be smart as a whole to make sure we’ve got some ways to change some things up and not just always stick him on an island, even though we believe he’s as good as he really is.”

After a wild regular season, bowl season is upon us, including the College Football Playoff. Here’s everything you need to know.
CFP preview » | Complete bowl schedule »
Players, storylines for every bowl game »
Previews: Fiesta | Rose | Sugar

Predictions for every bowl game

“It might be amazing to everybody else, but that’s been the mission from the very beginning,” he said. “He left Glenville with that potential. He’s one of the greatest kids to ever come to this program. If every kid would just follow and trust the process, we’d have more Coby Bryants.”

The undersized and overlooked pair have grown into surefire NFL picks. Gardner is Kiper’s No. 2 cornerback (behind LSU‘s Derek Stingley Jr.) and No. 16 overall prospect and Bryant is tied at No. 10 among corners. Now they get a chance to prove themselves against one of the sport’s great dynasties led by Nick Saban.

And when Alabama challenges them, Bryant said they’ll be ready.

“It doesn’t matter who lines up in front of us,” he said. “We’re going to treat our opponents the same, respect our opponents. Go out and play our game.”

Gardner’s high school coach said his story is a good reminder that anything is possible, thinking back to those conversations with college coaches.

“Every time I talk to them to this day, those coaches still are like, ‘I should’ve offered Sauce,'” he said. “He’s one of the best stories we’ve had here in our program. You’ve got a kid right here that was a diamond in the rough, man. And those do exist, you know? They do exist.”