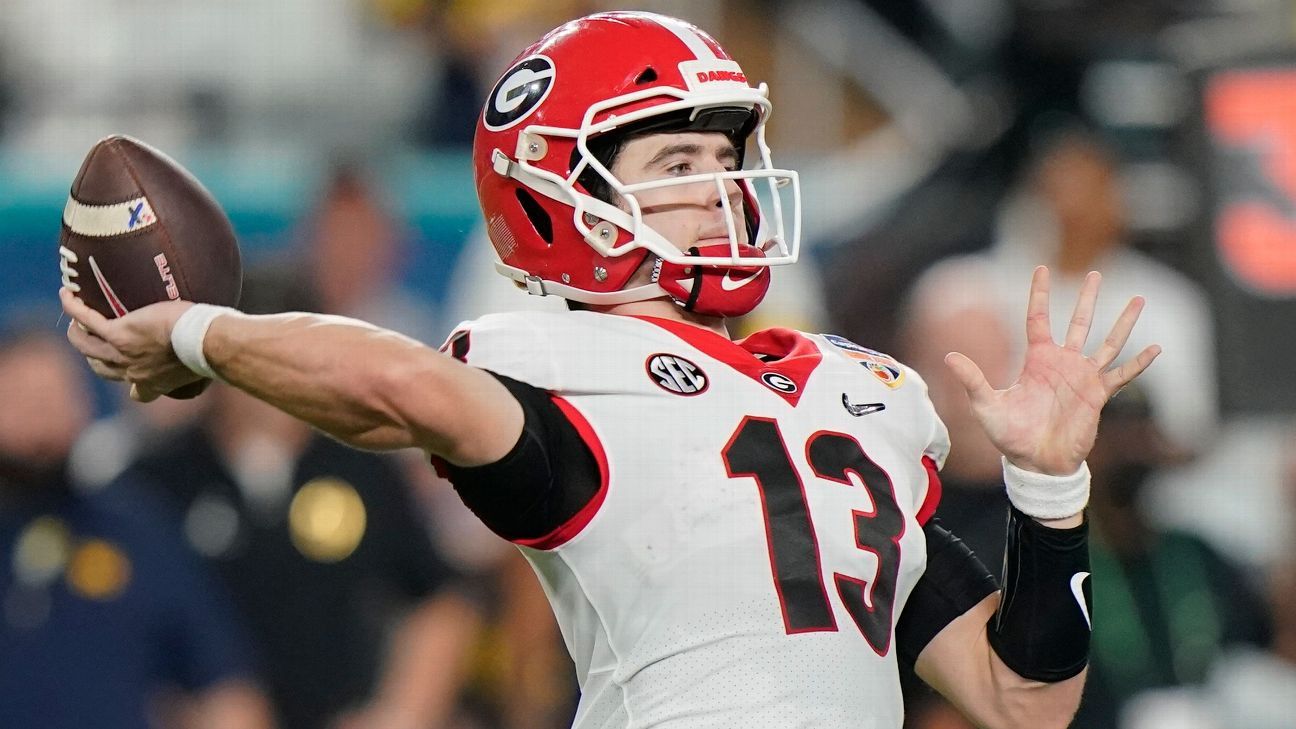 MIAMI GARDENS, Fla. — For a glimpse into whether Stetson Bennett has anything to say to his many detractors, let us go back to the second quarter against Michigan on Friday night, with Georgia already up 20-3.

Bennett took the snap and drifted slightly to his right before launching the ball down the sideline, hitting Jermaine Burton in stride for a 57-yard touchdown pass to essentially seal the game before halftime. For a guy who is constantly criticized for not having a strong enough arm, that happened to be his sixth touchdown pass of 50 or more yards, the most in a season at Georgia since Aaron Murray in 2012.

As Burton celebrated in the end zone, Bennett did a little happy-go-lucky dance, moving his arms side to side as he jogged off the field, before jumping up in celebration with Justin Robinson — a sly smile behind his facemask.

Bennett says he does not hear the outside noise, but it was hard not to wonder whether all the negativity directed at him inspired his performance in Georgia’s 34-11 win over Michigan in the College Football Playoff Semifinals in the Capital One Orange Bowl.

It certainly felt as if both he and his teammates heard every single person who has called him out since a disappointing performance in a 41-24 SEC championship game loss to Alabama Crimson Tide, openly questioning whether Georgia could win a national championship with a former walk-on in the starting lineup and former ESPN 300 recruit J.T. Daniels on the bench.

“I didn’t go out there and play well today in spite of people,” Bennett said. “I came out there and played well and worked hard throughout the few weeks we had off because my teammates needed me to do that, and we needed to do that to win. So as far as a statement, that’s my goal every week, is to play that well.”

Bennett went 20-of-30 for 313 yards and three touchdowns, winning Offensive MVP Honors. In the first half alone, Bennett went 16 of 22 for 234 yards with two touchdown passes and no interceptions. That ranks as the second-most in a half in his career.

He started the game with nine straight completions, and it was clear plenty more was to come. Bennett was efficient, and he handled pressure well, and he also delivered passes down the field with ease. Oh, he also ran when he had to, scrambling away at key moments to keep drives alive.

“He’s been really focused the last couple weeks,” Smart said. “It’s amazing to have a guy his age block out all the noise and just focus harder. It’s almost like every time he hears noise he just focuses harder on the game plan and what he has to do to execute. You look at some plays he made out there with his feet, they couldn’t account for his mobility.”

But will his performance Friday night be enough to answer the naysayers that seem to follow Bennett no matter what he does — especially now that a rematch against Alabama is set?

During his media availability in Miami before the game, Bennett told reporters he does not have any time to think about the haters.

“I wouldn’t listen to myself if I was giving a speech on heart surgery,” Bennett said earlier in the week. “So why would I listen to somebody who doesn’t do this for a living and just watches it happen? It really doesn’t bother me.”

Running back James Cook, himself the recipient of a beautifully placed 53-yard reception, confirmed as much in his own postgame comments, saying, “Like said, he ain’t got no social media, he carries a flip phone around, and he lets the noise go over his head and play football. That’s what I love about him. I tell him during the game, stay in there, don’t make bad decisions, use your feet, do all the little things that will help you get out of situations you can’t fix.”

Whether intentional or not, every bit of the game plan against Michigan felt like one big TAKE THAT! to anyone who dared question whether Bennett was indeed the right quarterback to lead Georgia to its long awaited national championship.

Georgia offensive coordinator Todd Monken spent the bulk of his media availability in Miami answering one question after another about why Georgia continues to start Bennett. After he explained he thought Bennett gave the Bulldogs the best chance to win a title, others persisted, wondering why Bennett was not good enough to start the season, but is good enough to start now.

Monken patiently answered that Bennett simply took advantage of his opportunity after Daniels got hurt and never really let it go. Those answers are good enough when Bennett helps get Georgia to 12-0, and when he dominates Michigan in the CFP semifinals.

But are those answers good enough now that we are talking about the actual national championship game, against the team the set off the torrent of questions about Bennett in the lead up to the playoffs?

Because there is little doubt that these questions will come up once again headed into the rematch against Alabama, the team that flummoxed and flustered Bennett and the Georgia offense in the SEC championship game. Georgia had more points in the first half against Michigan (27) than in the entire game against the Tide (24).

Where Bennett has to be better is against pressure, something he handled well against Michigan. When he did face pressure on Friday night, he went 4-of-7 for 138 yards, two touchdowns and no interceptions. But in in the SEC title game against Alabama, Bennett was 5-of-15 for 60 yards, an interception and three sacks taken when he faced pressure from the Tide.

What happens if the Dawgs once again fall behind by double digits, as they did in the SEC title game? Can Bennett deliver against a keyed-up Bama defense that knows he has to pass?

In two seasons as part-time starter prior to Friday, Bennett threw 57 second-half passes when the Dawgs were either tied or behind. He completed just 28 of them for 313 yards, two touchdowns and five interceptions. Against Alabama, Georgia scored on two of its first three drives, then on two of its last nine, with two interceptions and two turnovers on downs.

Without question, Bennett has a story that every underdog or college football fan in America should embrace. Bennett grew up wanting to play for Georgia, but his small size only got him one FBS scholarship offer out of high school. He walked on to the Bulldogs in 2017, left Georgia for junior college and ultimately came back in 2019.

After a wild regular season, bowl season is upon us, including the College Football Playoff. Here’s everything you need to know.
CFP preview » | Schedule » | Takeaways »
Players, storylines for every bowl game »
Previews: Fiesta » | Rose » | Sugar »

Predictions for every bowl game

His circuitous route back to the Bulldogs is the stuff of Hollywood movies. During his postgame interview, he was asked repeatedly about standing on the sideline in the 2018 Rose Bowl as a freshman walk-on, as Georgia beat Oklahoma in the CFP semifinal, wondering whether he thought he would ever get his chance.

“I mean, no,” Bennett said. “Every day from then until now you just go about your business and put your best foot forward, and hopefully – you can’t predict the future, but hopefully something works out.”

The real answer about whether Bennett is the quarterback who can lead Georgia to the national championship will not be answered until Jan. 10.

Until then, Georgia fans will be wondering whether they will see the Bennett that dismissed Michigan in a half, or the one that could not find a way to beat Alabama.