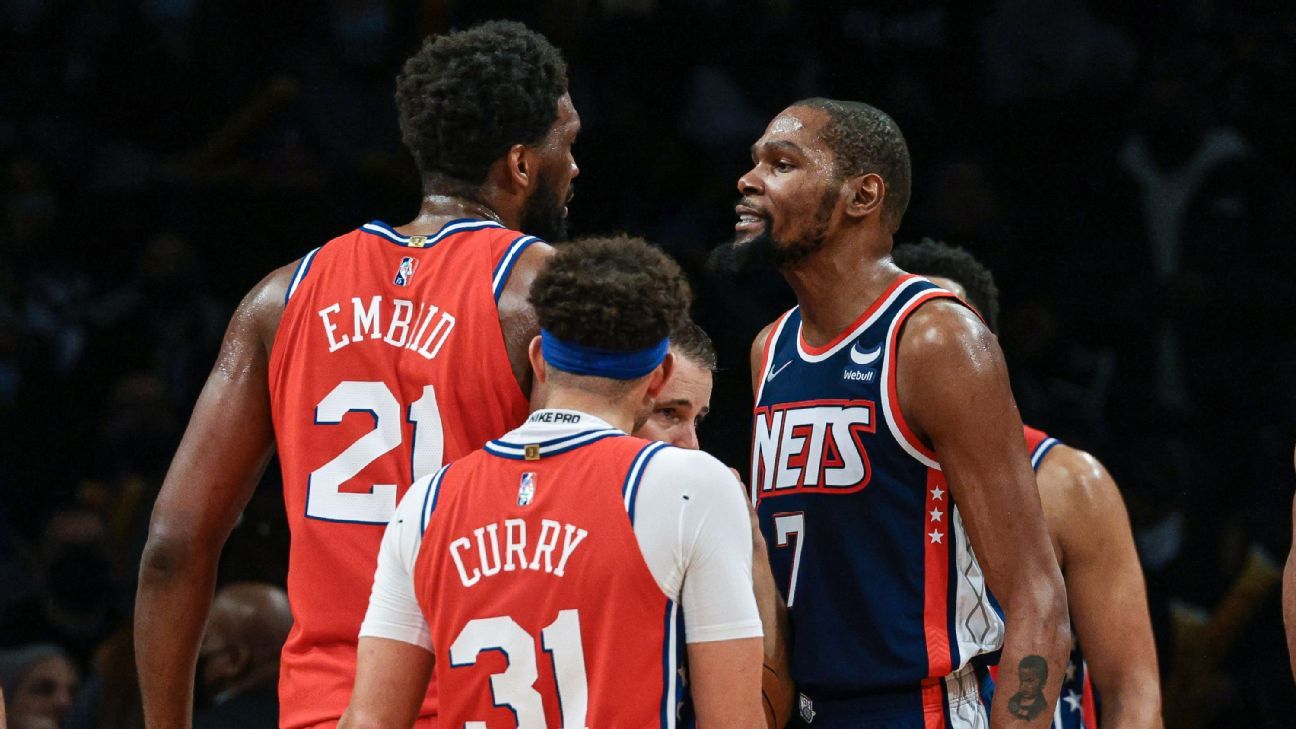 NEW YORK — Two weeks ago, Kevin Durant led a shorthanded Brooklyn Nets team to a win over Joel Embiid and the Philadelphia 76ers, and waved his opponents off the court here inside Barclays Center.

Thursday night, Embiid gave Durant a taste of his own medicine, waving him and the rest of the Nets off their home court after his 76ers pulled off a 110-102 come-from-behind victory.

“That’s the best team in the conference. Obviously I respect him a lot,” Embiid said, before adding with a wry smile, “I mean, judging by the way he was acting last time, that’s the same thing he told us.

“Basically, I returned the favor.”

Embiid was able to have the bragging rights this time around after yet another outstanding performance for the 76ers (19-16), who have now won three in a row and four of their past five. The big man finished with 34 points, seven rebounds, an assist, three steals and a block in 32 minutes, while second-year point guard Tyrese Maxey knocked down five 3-pointers — a new career high — and scored 25 points.

But, as usual, it was Embiid who stole the show, including celebrating an and-one basket with 15.3 seconds left that sealed the game. Durant, making his return to the court after missing the two weeks since that last meeting because he entered the NBA’s health and safety protocols, took exception, and the two wound up getting double technical fouls.

Once those final 15 seconds ticked off the clock, more verbal jousting ensued, with Embiid repeatedly waving Durant away — and then punctuating his celebration with a gesture toward the Philadelphia fans clustered around his team’s bench as he marched off the court.

Despite the way things appeared on the court, both Durant and Embiid were very respectful of the other postgame — and said trash talk between the two of them is far from a new thing.

“If you’ve been watching Joel and I play, it’s been like that every game — even the All-Star Game,” said Durant, who had 33 points, six rebounds and four assists in 38 minutes. “We just respect each other so much that natural competitive fire, I guess, comes out. It’s the name of the game and letting them know we’re coming with the same energy.

“I like the energy that they played with tonight. You love competition; it’s only going to make you better.”

Embiid took it a step further, saying that Durant is the only player in the league who might have more gifts on a basketball court than he does.

“There’s a lot of respect,” Embiid said of Durant. “I always tell people, I think I can do everything on the basketball court, and there’s not a lot of guys that are able to do it. If there was one player that I think is probably as talented, or more talented, than me, it’s definitely him.

“So I have a lot of respect for him. I admire his game. We’re just competitive. And wins matter, every single one of them, and it’s always good to beat the best team in the conference.”

Both of these teams have gone through a lot over the past few weeks. Brooklyn had three games postponed due to its roster being ravaged by COVID-19, and saw Kyrie Irving return to the practice court with his teammates for the first time since training camp Wednesday.

Philadelphia has been trying to get back to where it was at the start of the season ever since Embiid entered the health and safety protocols following the 76ers’ 8-2 start; since then, they are 11-16 — and that doesn’t begin to account for the strain of the ongoing Ben Simmons saga.

Adding to the degree of difficulty Thursday night for Philadelphia was coach Doc Rivers entering the health and safety protocols that morning, leaving veteran NBA assistant Dan Burke to take his place.

Burke, who has more than three decades of assistant coaching experience, had lost his previous two chances as an acting head coach while working under Nate McMillan with the Indiana Pacers. Having admitted before the game that those losses “stuck with him,” he could hardly contain his excitement over how Philadelphia played afterward.

“It’s fun,” Burke said. “I’ll tell you, and I don’t know if we ever say it enough: [We have] a lot of great character and big hearts. And if you’ve got that, you’ve got a chance every night at both ends.”

Now, Philadelphia doesn’t have a game for four days, and has only three games over the next 12 days — a welcome respite for a team that’s had a hellacious opening two months of the season.

But, in the eyes of Andre Drummond, there’s one silver lining to come from all of it.