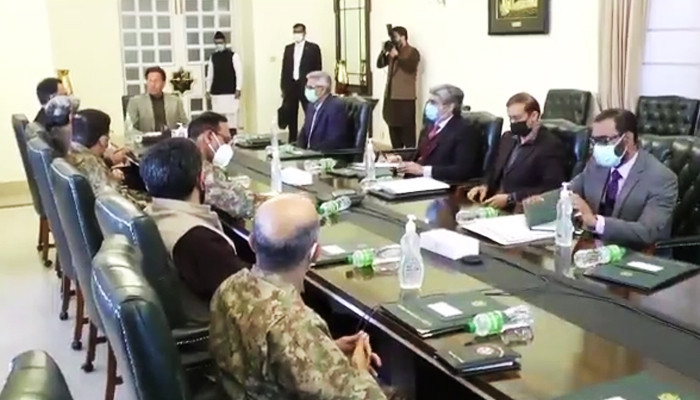 ISLAMABAD: Prime Minister Imran Khan was informed on Friday that after February 10, the number of positive coronavirus cases has decreased by 6.8% while hospital admissions and patients needing intensive care has also declined, his office said.

The PM was provided details of the figures while receiving a briefing on the anti-coronavirus measures taken by the government. The PM was briefed about the omicron wave in the country as well as its spread globally as well as in the region.

According to the PM Office, the officials were told that the Omicron’s highest point was in January with the cases declining but was told that the cases are still highest in the United States and Europe.

The PM was told that India currently tops the list in terms of deaths from coronavirus in the region, where about 1,000 people are still dying from COVID-19 daily.

On the other hand, the premier was told that the government’s measures to ensure strict implementation of the coronavirus standard operating procedures (SOPs) in Pakistan has led to a decline in the number of Omicron cases.

The meeting was also informed that the number of patients receiving intensive care after being diagnosed with the omicron variant was 71% less than the previous wave of the pandemic.

“After February 10, the number of positive cases has declined by 6.8%, hospital admissions and need for intensive care has also been declining, which is a positive trend,” the meeting was told. The PM and other officials were also told that the recent wave is causing an average of 42 deaths per day.

The premier was also given an update on the progress made in vaccinating citizens against coronavirus.

“At present, 61,329 teams are working for the safe phase one of every Pakistani vaccination in the country and doses of 2.2 million vaccines are being administered daily,” said the PMO.

The premier was told that the Phase II of the vaccination will begin on March 7 of this year. On the other hand, 59% of students between the ages of 12 and 17 have been fully vaccinated and 3.4 million people over the age of 18 have been administered booster doses.

The meeting was further informed that there was enough stock present in the country for vaccinating the entire population.

On the provincial level, the PM was told Punjab leads the other provinces followed by Sindh, Khyber Pakhtunkhwa, Balochistan and other areas.

Prime Minister Imran Khan commended the performance of the National Command Operation Centre (NCOC) and the Ministry of National Health Services for their performance, but directed them to ensure implementation of the SOPs and speed up the vaccination process.

“The Pakistani nation will never forget the sacrifices of doctors and frontline health workers,” said PM Imran, while commending the authorities.

The PM said that the government ensured the protection of the economically weaker sections by going for a smart lockdown instead of a complete lockdown. The government’s policies in tackling coronavirus were lauded by the world, said the premier.

“The public played a huge role in implementing the coronavirus SOPs. When people across the world were out on the streets against lockdown the Pakistani people just followed the SOPs and not only cooperated with government’s smart lockdown initiatives but also took part in the vaccination campaign,” said PM Imran.

In a separate meeting, PM Imran was informed $3 billion remittances have been received via Roshan Digital Accounts (RDA).

The premier was informed about the “remarkable success” of RDA in sending remittances by overseas Pakistanis.

“Overseas Pakistanis are our precious asset and we are taking historic steps to ensure their convenience,” said PM Imran. Government initiatives such as granting voting rights to Pakistanis abroad, issuing power of attorney and succession certificates online will have far-reaching consequences for their well-being and convenience, he added.

The PM directed the State Bank of Pakistan (SBP) to facilitate overseas Pakistanis to send their remittances to Pakistan via RDA on a real-time basis.