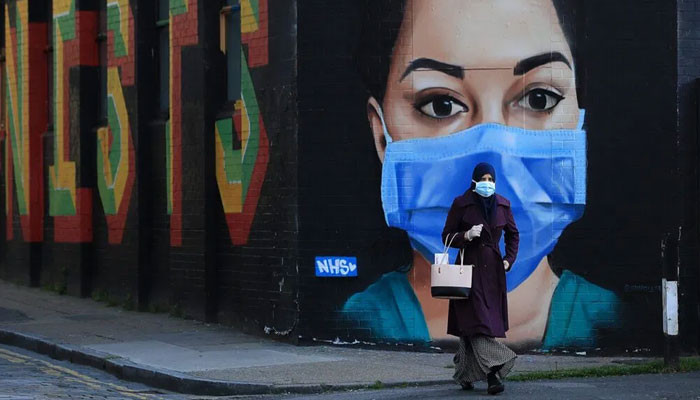 LONDON: The UK on Friday saw the highest number of Covid infections since January, a senior minister said Friday, as the government seeks to slow the spread of the new variant.

Communities Secretary Michael Gove said that the country faces a “deeply concerning situation” as the Omicron variant spreads rapidly, with case numbers doubling every two to three days in England.

“We know that we have the highest number of Covid infections across the UK recorded today since January 9,” when there were 59,937 cases, Gove told journalists after meeting leaders of UK regions.

He added that 30 percent of reported cases in London are now the Omicron variant, while the virus was only identified in the UK two weeks ago.

Scotland’s First Minister Nicola Sturgeon warned that “we may be facing — indeed we may be starting to experience — a potential tsunami of infections”.

The UK Health Security Agency (UKHSA) said that if the trend continues, it expects Omicron to become the dominant variant in the UK by mid-December, with over one million infections by the end of this month. So far there have been 1,265 confirmed Omicron cases.

The UKHSA also said that early analysis of around 500 people confirmed to be infected with Omicron showed that AstraZeneca and Pfizer jabs “provided much lower levels of protection against symptomatic infection”, in comparison to the Delta variant.

A booster dose appeared to considerably increase this protection to 70 to 75 percent, it said, while cautioning such small sample sizes should be treated with caution.

The UK has one of Europe’s highest death tolls from the virus, at 146,255, while death rates have not risen in the last week.

Prime Minister Boris Johnson on Wednesday announced a range of tougher restrictions he called “Plan B”, including compulsory mask-wearing in museums, theatres and cinemas from Friday and guidance to work from home from Monday.

From Wednesday, people will have to show Covid passes with proof of two jabs or a lateral flow test in order to attend events in crowded settings such as nightclubs and stadiums.

The new regulations will be put to a debate and vote in the House of Commons next week but are expected to be approved despite opposition from some Tories.