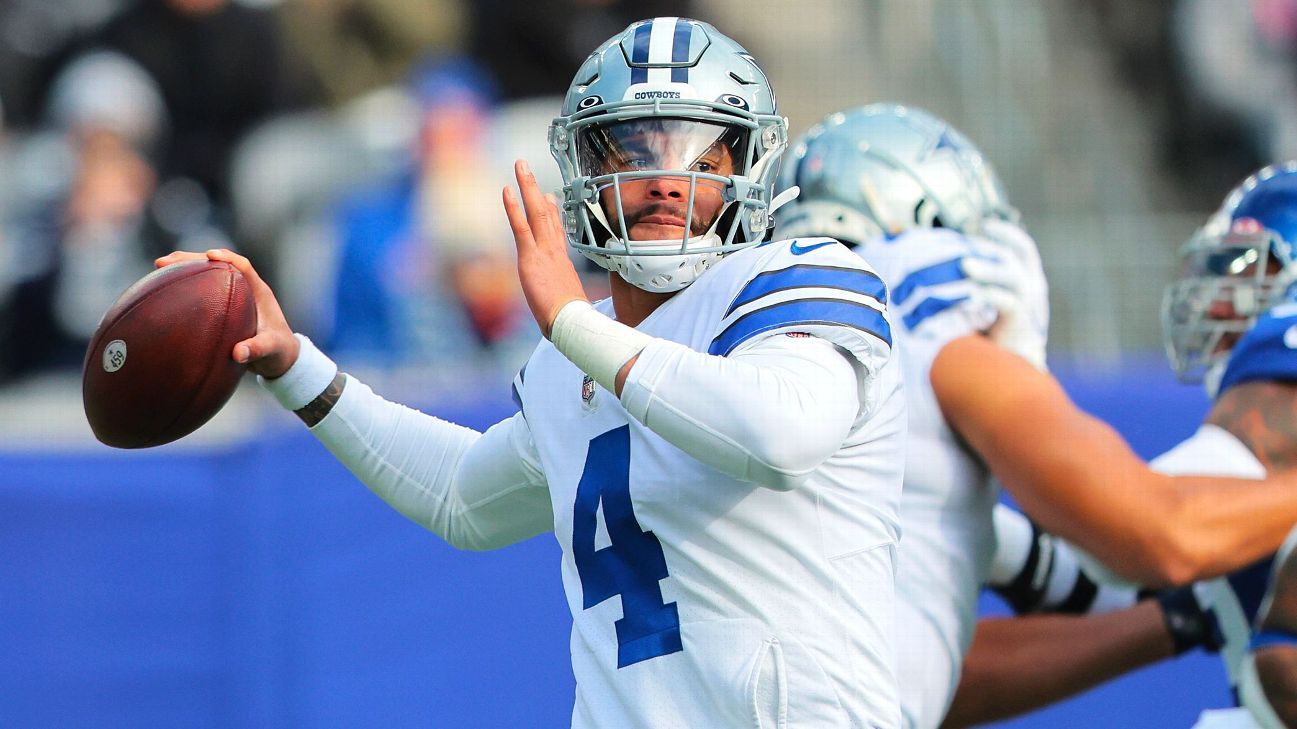 EAST RUTHERFORD, N.J. — The transformation of the Dallas Cowboys from how people thought they would win games in 2021 and how they are winning games is staggering.

So much so that quarterback Dak Prescott and defensive end DeMarcus Lawrence have come up with a bet between the offense and the defense for the rest of the season. It’s touchdowns scored versus takeaways created.

After Sunday’s 21-6 win against the New York Giants at MetLife Stadium, the Cowboys’ defense has a 4-2 lead.

The Cowboys had four takeaways — three interceptions and a fumble recovery — to a touchdown run by Ezekiel Elliott and a Prescott touchdown pass to Dalton Schultz.

“They obviously won this one, but we’ll make sure it carries over,” Prescott said. “They’re doing a great job getting the ball. Front seven’s attacking, back end’s getting their hands on balls and it’s impressive. It’s great to be a part of it.”

Owner and general manager Jerry Jones was not aware of the wager, and Prescott did not say what is on the line.

“I love that,” Jones said. “I’ve seen some of the most productive growth in teams when they’ve been doing a little wagering. Deion [Sanders] and Michael [Irvin] and the defense and the offense used to bet $50,000 a practice on 2-minute drills as to who won that practice. We had to stop that … [but] it’s why they could say it was tougher out there at the 2-minute practice than it was in the game.”

Entering the season, the Cowboys’ success was thought to hinge on a high-powered, highly talented offense, but a defense that allowed a franchise-record 473 points last year has turned into one of the best units in the NFL.

Although cornerback Trevon Diggs, who intercepted his league-leading 10th pass Sunday, does not want the qualifier.

“We the best defense, that’s for sure,” Diggs said.

League statistics might not bear that out, but the defense was able to dominate New York even with rookie sensation Micah Parsons not making a solo tackle. In the official gamebook, he had a half-tackle and a pass deflection, ending his sack streak at six straight games.

“This is how we built our identity,” Parsons said. “We pride ourselves on playing hard-nosed football, outhitting the other team. It’s a better game when we make sure they score zero, and we held them out. I thought we did a great job today.”

For the season, they have 31 takeaways, the most by a Dallas defense since 2014. They have 23 interceptions as a team, their most since 1999.

In five of the past six games, the Cowboys have allowed more than 20 points just once. In each game of their 3-0 start to December — all road games — the Cowboys have recorded at least four takeaways, their longest streak since 1994.

Jones could not remember a Cowboys defense playing as well as the current unit in the past 10 years, and it’s a unit that is just now getting Lawrence back to speed after a broken foot, Randy Gregory going after missing four games with a calf strain and Neville Gallimore playing in just his second game because of an elbow injury over the summer. Two defensive tackles did not play against the Giants — Trysten Hill and Osa Odighizuwa — after being put on the reserve/COVID-19 list on Saturday.

“My whole point about all this is if we can just stay healthy, keep bringing our guys that have been in rehab coming on back,” Jones said, “and then we can get that offense, the nuances of that offense.”

Jones did not finish his thought, but he remains confident the offense will find its rhythm again. The running game was better with 125 yards on 30 carries by Tony Pollard, who returned after a one-game absence with a foot injury, and Elliott. The passing game was efficient but not explosive, and the offense scored on just two of five red zone trips.

Prescott, however, isn’t so sure how to feel about the bet.

“This thing is ongoing; we’ll catch up,” Prescott said. “Well, hopefully not. Hopefully we don’t catch up honestly because I hope they keep rolling them like that.”