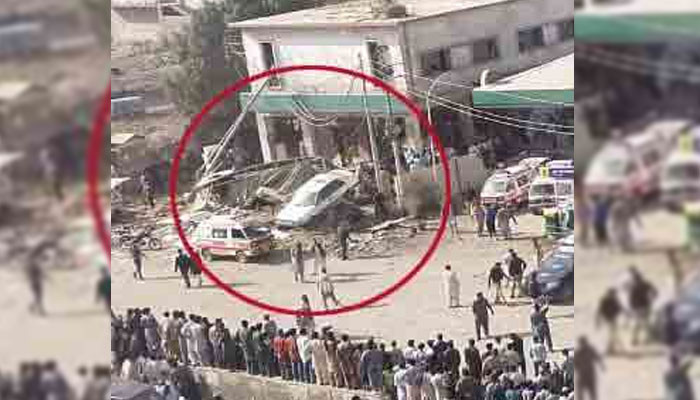 KARACHI Another victim of Karachi’s Shershah blast succumbed to his injuries at a hospital Sunday morning, pushing the death toll from the explosion to 17.

A day earlier, at least 16 people had been killed and more than a dozen others injured in a blast that took place at Paracha Chowk in the city’s Shershah neigbourhood.

PTI MNA Alamgir Khan’s father was among those to have died in the explosion, PTI-Karachi President MPA Khurram Sher Zaman had confirmed.

DIG South Sharjeel Kharal had said 10 injured people were discharged after necessary medical treatment, while six remain under observation, including two who were on the ventilator.

A spokesperson for the Karachi Police, quoting the bomb disposal unit’s report, had said the blast took place in a gas pipeline running through a nullah located in the area, causing immense damage to the building of a private bank that was constructed atop it.

The spokesperson had noted that there was no lead suggesting that the blast might be linked to terrorism.

Sui Southern Gas Company (SSGC), in a statement, had said that its team had confirmed that there was “no SSGC gas pipeline” in the area. “The gas pipelines installed in the area are safe and they have not incurred any damage.”

Referring to the BDU’s report, the SSGC had said that it had declared a blast in the sewerage line as the reason for the explosion.

“It is important to note that neither were flames visible nor was there any smell of natural gas in the area — which is a clear indication that the blast is not linked to any of SSGC’s pipelines,” it had added.

DIG South Kharal had said police obtained CCTV footage of nearby places — the bank and an office.

The police official had said that a forensics team also obtained samples from the debris, and that the overall scope of the investigation had been extended.

“A clearer picture of what happened will be before us by tonight,” he had added.

Taking notice of the incident, Prime Minister Imran Khan had written on Twitter: “My heartfelt prayers [and] condolences go to all the families of victims of the twin blasts at Sher Shah Paracha Chowk, Karachi.”

Expressing grief over Alamgir’s loss, he had said: “I am especially saddened to hear of the loss of our MNA Alamgir Khan’s father who also perished in the blast. May Allah give him the strength to bear this loss.”

During the rescue and search operation, a second blast had taken place when a few electric wires, which were being taken down, collided with a gas line.

No loss of life was reported in the second blast.

Sindh Chief Minister Syed Murad Ali Shah had directed the commissioner Karachi to conduct an inquiry into the incident and submit a report over its findings, a spokesperson of the chief minister said.

“Police officers should be included in the inquiry so that all aspects [of the blast] can be investigated, ” the chief minister had said, expressing deep sorrow over the loss of lives in the blast.

CM Shah had issued instructions to the secretary of health to provide necessary facilities to the injured at the Civil Hospital immediately.

The police believe that the blast occurred inside the sewerage line in Shershah due to the accumulation of gas. A case has been registered in connection with the blast on the behalf of the state through a police inspector.