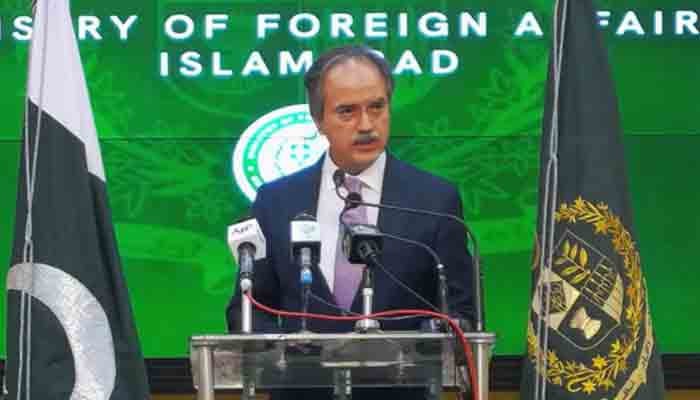 ISLAMABAD: The Foreign Office avoided Friday responding to questions seeking an explanation to Pakistan’s refusal to attend the Summit of Democracy in the US and referred the queries to the statement issued earlier in this regard, saying “it was a considered decision”.

Several queries were raised during the weekly media briefing, but the FO spokesperson chose not to respond directly except to say: “With regard to the Summit for Democracy, I would like to say that our issued statement speaks for itself and I would like you to refer to it. It was a considered decision.”

“Our statement is quite clear and speaks for itself. Some of the opinions and impressions that I gather from your questions, I think, are unfounded,” he said.

He was asked whether the decision not to attend was because President Joe Biden had chosen not to make any direct contact with Prime Minister Imran Khan even after nearly a year in office or if it was because China was not invited and Taiwan received an invite, and Pakistan wanted to show solidarity with Beijing.

Another query was whether Pakistan had an issue with the agenda of the summit.

In a related development, Chinese Foreign Office spokesman, Lijian Zhao had hailed Islamabad’s decision to decline Biden’s invite to the summit. “Pakistan declined to attend democracy summit. A real iron brother!” he had tweeted while reproducing the FO statement.

On Wednesday, the FO had issued a statement announcing that it would not attend the Summit of Democracy but noted that the decline to attend the moot did not reflect on bilateral relations.

During the weekly briefing, the FO spokesperson was also asked to expand on the comment about the prime minister having said that Pakistan is not part of any bloc, to which he responded, “We are not part of any bloc, let me recall that this has been a consistent and longstanding policy of Pakistan, we have always maintained this principled opposition to the concept of bloc politics.”

As Pakistani students keep protesting the Chinese government’s decision not to allow them to return to continue their studies, the spokesman said that they were engaged with China on this issue.

“There is a constant dialogue and engagement with the Chinese side on this issue both in Islamabad and Beijing. We are conscious of the difficult position the students find themselves in due to the Covid situation. We continue to follow this matter with a view to addressing it at the earliest, and we know the high priority attached to it by the Chinese authorities as well,” he said.

To another query, the spokesperson said he had not seen the peace agreement signed by the TTP and the government was in no position to comment on this.

When asked if the condolences for the Indian CDS who had passed away in a heli crash were sent on the state level or institutional level, the spokesperson responded: “I don’t see a need for interpretation. You have seen the condolences expressed by top military leadership on the tragic incident”.

While a number of powerful world capitals have diplomatically boycotted the Beijing Winter Olympics, to a query the spokesperson said, “The Olympic Spirit espouses fair participation in the events. Like in all previous Olympics events, Pakistan would like to see the Olympics Spirit upheld in a true sporting fashion. Pakistan also opposes any form of politicisation of sports and hopes that all nations would come together in Beijing and afford their athletes the opportunity to compete against the best and showcase their skills”.