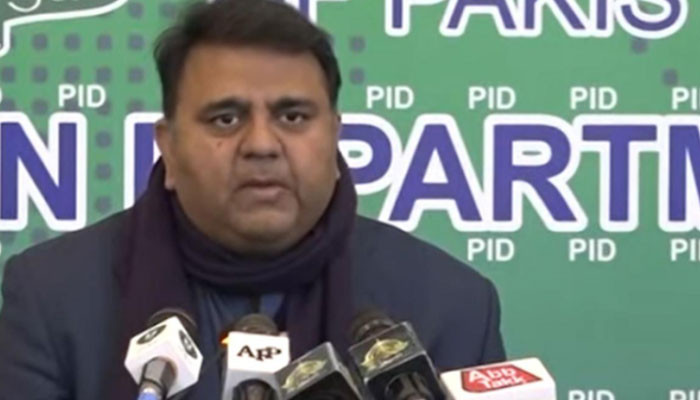 ISLAMABAD/KARACHI: Federal Minister for Information and Broadcasting Chaudhry Fawad Thursday said a defamation case was being filed against justice (retd) Wajihuddin Ahmad for leveling baseless allegations against Prime Minister Imran Khan and also notices were being sent to TV channels, which made part of their drives his allegations without verification.

He said that ‘we want enforcement of Article 09 of the Constitution, concerning dignity of individuals’. He added a draft had been prepared incorporating also the input from the action committee and now the media organisations should give final shape to the draft law.

Fawad explained that Articles 9 and 14 of the Constitution give the right to self-respect to the citizens of Pakistan, but unfortunately this right is constantly violated by the Pakistani media. He noted that the honour of the common man and even the honour of the prime minister is not safe here, regular campaigns are being run to hurt the self-esteem of the people.

The minister recalled that after the coming of PTI government, Najam Sethi organised a programme in which he said that Imran Khan had divorced his wife, which was purely personal matter and the news also turned out to be incorrect after which it was said that the Chief Commissioner of Islamabad was changed to repair Bani Gala residence of Imran Khan.

And, he continued then facts surfaced that Imran did it on his own while it was responsibility of the state to do the needful for security of the chief executive there. Then, a person, Wajih, who was favoured by Imran and nominated presidential candidate, issued a baseless statement, which was projected without verification that Rs5 million monthly expenses of Imran’s residence were borne by Tareen, who himself denied it.

Two days ago, while talking about the change in a local TV programme, former PTI leader Justice (R) Wajihuddin Ahmed had said that the idea that Imran Khan is an honest man is completely wrong, alleging that Imran Khan’s situation was that he had never run his own house for years. In the beginning, the people of Jahangir Tareen used to pay Rs3 million and then gave Rs5 million monthly for expenses.

The minister contended that a question arose that if the dignity of the chief executive of the country could be flouted with this much ease, then what would be the situation of common man: should not there be some principles for the media and some responsibilities as well.

Chaudhry accused broadcast media of running campaigns against army generals and judiciary representatives on a daily basis. “The same channels face fines abroad but in Pakistan, there is no law, let alone its implementation.”

For this reason, he pointed out, we had proposed the law of Pakistan Media Development Authority, according to which the duty of responsibility along with free expression is also necessary: we see daily campaign against institutions, the army, the judiciary and others, all this is being done to weaken the structure of Pakistan’.

The minister said that the prizes/plots that Imran Khan got in winning the World Cup and cricket matches in India, were devoted to Shaukat Khanum Hospital without any greed. The prime minister never burdened the treasury of Pakistan for his personal expenses.

He said that people like Wajihuddin and Najam Sethi should be dealt with. The case against Najam Sethi has been going on for three years but they have taken a stay from the court: The question is what is our judicial system doing.

Fawad said that when such allegations are leveled against the prime minister of the country, the confidence of the people of the country is breached, so we have decided that we are filing a case against Wajihuddin Ahmed.

In response to a question, he said that ‘we had made rules for the media but the journalists went on strike. I want strict rules to be made on this series of ‘fake news’ which has got out of hand’.

Asked about the broadcast of a person’s statement, Fawad said that nowhere in the world is it possible to make a statement based on allegations and insisted it is important that law should be made on this.

He noted that as per the British law, when a husband and wife go for divorce, their family property is claimed 50/50: on the divorce with Jemima Khan, who hailed from the richest UK family, Imran could have become a billionaire had he claimed 50 per cent property but he did not, though it was his legal share.

The minister praised Jahangir Tareen and said he acted like a gentleman and an honourable man that he never paid such expenses for Bani Gala.

Meanwhile, former PTI leader Justice (R) Wajihuddin Ahmed on Thursday responded to Minister of Information and Broadcasting Fawad Chaudhary’s comments regarding the criminal defamation case to be filed against him by the government and said that “I have spoken nothing but the truth.”

He expressed these views while speaking during an event in Karachi. “These expenses are out of the books and are not accounted for. Hence it was easy for Jahangir Tareen to deny it,” says ex-judge.

“File a defamation suit against me, the courts are open but the question is whether my words have violated the rights of Federal Minister for Information Fawad Chaudhry or Imran Khan,” he said and added if someone’s rights have been violated, he should file a case himself.

Referring to Fawad’s comments about Jahangir Tareen earlier today, Justice (R) Wajihuddin said that there is nothing wrong with Jahangir Tareen’s relations with Imran Khan. “Jahangir Tareen has denied my statement. What else was expected of him?” he asked. “Why would he accept money that had been spent illegally? Tareen made a billion dollars in sugar mill cases.”