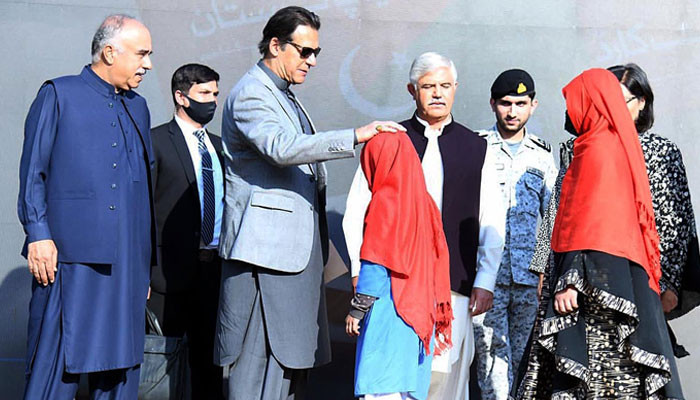 Defying the Election Commission of Pakistan’s (ECP) orders regarding his visit to Peshawar ahead of the local bodies election in Khyber Pakhtunkhwa, Prime Minister Imran Khan went ahead and attended the event.

On Wednesday, the Peshawar regional election commissioner issued a letter saying that it had come to the ECPs’s notice through a news report published by Dawn that the premier is expected to visit Peshawar today (Wednesday) to launch the Pakistan Card Initiative.

“[…] your attention is drawn towards instructions contained in ECP’s notification No. F. 16(1)2021-LGE-Kp, dated 4th November 2021 […] regarding restriction on visiting the area of any local council and announcing any development scheme after issuance of the election schedule,” the letter read.

It referred to the relevant provision of ECP’s Code of Conduct, restricting the president, prime minister, speaker, deputy speaker of any assembly, chairman and deputy chairman of any Senate, federal or provincial ministers, chief ministers, advisers to the prime minister, or any holder of a public office from visiting an area where an election is being held.

However, defying all directions the premier attended the launching ceremony of the Micro Health Insurance Programme under the Kamyab Pakistan Programme.

It is pertinent to mention that the premier was cautioned by the ECP officials against a violation of the Code of Conduct and had stated that the Commission would, otherwise, take legal action against him under the Election Act, 2017.

‘Free health insurance card is a blessing for poor’

“Free health insurance card is a great blessing for poor people and low-income groups,” he said, adding that the universal free health coverage in Khyber Pakhtunkhwa was unprecedented as such facilities were not available even in the developed countries.

Under the Ehsaas Ration Discount Programme, he apprised the people present at the event that groceries will be provided to about 20 million families by covering 130 million people and giving them a 30% discount on the purchase of essential food items including wheat flour, ghee, pulses, adding about 53% of the country’s total population would be benefited.

Families with less than Rs50,000 per month income are eligible for the Ehsaas Ration discount programme.

The prime minister urged the elected representatives to visit their constituencies and inform people and owners of grocery stores about the benefits and procedures of the Ehaas Ration Programme’s registration.