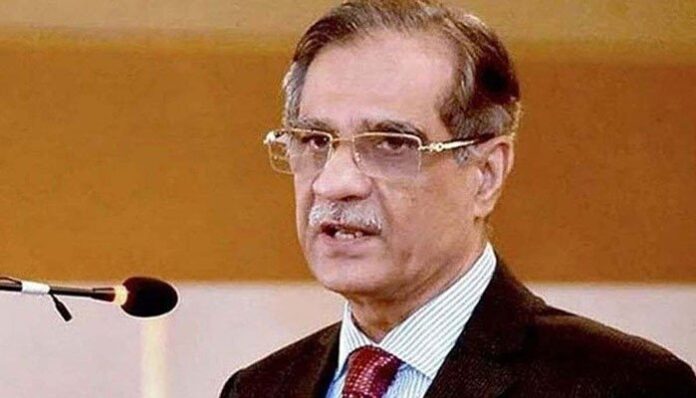 ISLAMABAD: Amid the deepening controversy over the latest audio leak showing alleged direction of former Chief Justice Saqib Nisar to get Nawaz Sharif and Maryam Nawaz punished, demand for holding of an inquiry into the matter by the Supreme Court has risen enormously.

While the opposition parties, media and senior members of the legal fraternity had already been demanding a thorough probe into these matters by the apex court, a story by a television channel creating doubts about the authenticity of the audio encouraged even the ruling party members to call for its probed by the SC.

Governor Sindh Imran Ismail, while quoting the TV channel’s report, demanded the Supreme Court hold a detailed inquiry and expose those who were behind it. The TV channel report has encouraged the PTI as well as the pro-Saqib Nisar groups to get the audio probed. The other side, however, wants the issue having been probed by the judiciary to prove that Nawaz and Maryium were punished following pressure exerted by the then Chief Justice.

Independent senior lawyers like Hamid Khan, Rashid A Rizvi, Salman Akram Raja want to see the issue probed for the respect of the judiciary. Interestingly, leading media persons and TV anchors are also surprised why such matters relating to the judiciary remain uninvestigated. It is generally said and believed that pushing such matters under the rug is not in the interest of the judiciary.

Minister for Information and Broadcasting Fawad Chaudhry said the “campaign” against judges started in a “haste”, indicating that the people did not do their homework properly. However, neither the information minister nor the government announced any inquiry in this respect.

The US firm — Garret Discovery — which examined the tape has already concluded, “This audio has not been edited in any way”. According to a Dawn story, the firm, however, when asked said, “They never made any claim about the authenticity of the conversation.” The report added, “The forensic was about the tape, not who the two persons were. Although, the first voice is that of Mr Nisar, we don’t know the second person.”

The FactFocus and its journalist Ahmad Noorani in its story shared on Sunday last had also referred to the forensic report of Garret Discovery. On the contrary, the private TV channel — Samaa News — in its report on Monday night claimed that the audio is the result of cut and paste of the past speeches of the former CJ Saqib Nisar. The TV channel report created serious doubts about the authenticity of the audio. Ahmad Noorani, however, refuted the claim of the TV channel. He referred to the forensic audit done by the US firm and invited the authorities in Pakistan to do the forensic audit again.

This controversy resulted in a greater demand calling for the probe by the Supreme Court of Pakistan. Interestingly, in the past too, all such matters have been overlooked and no inquiry or probe has been ordered.

During the Panama case, this newspaper broke the story of Whatsapp JIT but despite serious questions raised and controversy generated, it was never probed as to why and on whose direction the names of the JIT members were dictated to the departments concerned.

Similarly, the allegations of the then puisne judge of the IHC Shaukat Siddiqui and his affidavit remained unprobed. Video of the late Arshad Malik, judge of accountability court, was also never investigated by any committee or commission though the judge was dismissed from the service. Of late, former chief justice of the GB Supreme Appellate Court Rana Shamim in his affidavit also accused ex-CJ Saqib Nisar of influencing the judges in Nawaz and Maryam case, but in this case too no inquiry has been ordered either by the government or the apex court.