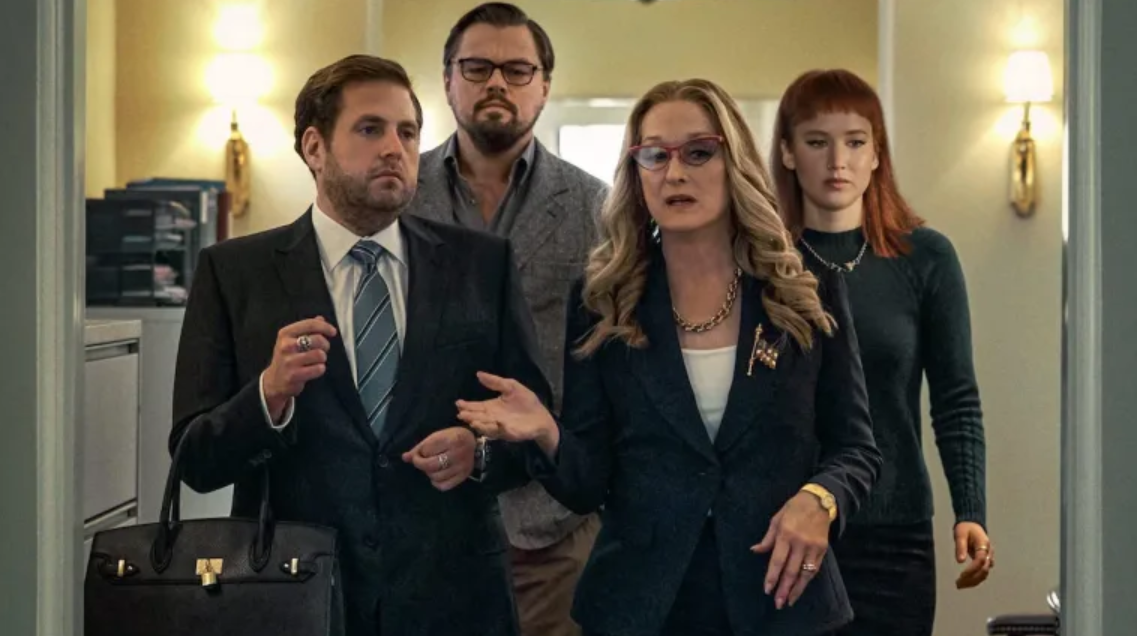 
Carl Sagan always worried about the world and what the human species are going to do to it. He feared blind faith and myth would outpace rationality in an age where everything is dependent on science and technology but no one knows anything about science and technology. “It’s a recipe for disaster,” he had said in an interview. His words were, like always, prophetic.

Every few days, since the initial Covid-19 outbreak two years back, we see a new public figure turning out to be an anti-vaxxer who believes that if the vaccine isn’t a ‘Jewish conspiracy’, as it is often deemed in our part of the world, it clearly is a lab-invented virus, made to spread faster than our access to 5G. Pair this healthcare emergency with the climate crises and the global leaders’ failure to implement the steps discussed in countless climate change roundtables, and you’ll get the premise of Adam Mckay’s Don’t Look Up.

The film follows a Michigan State tenured professor Dr Mindy (Leonardo Decaprio) along with his PhD candidate Kate Dibiasky (Jennifer Lawrence) and the head of Planetary Defense Coordination Office, Dr Teddy (Rob Margon) as they try to convince the US President (Meryl Streep) that a huge meteor is going to hit planet earth soon. Unsurprisingly, she denies the emergency and so does her staff in what would have been just another day in the White House under The Republican administration.

There is no doubt about it being a great concept for a film. In fact, any attempt, whether fact or fiction, at raising the alarm on the climate emergency and neo-liberal denial of it must be lauded for having its heart in the right place. But that really isn’t enough and serves no purpose when the biggest streaming platform picks the best actors of Hollywood to make a film that isn’t even half as entertaining as the Trump administration in real life, or the countless Netflix side releases streaming from all across the globe.

I get it isn’t easy to be as naturally witty and awe-inspiring as a Republican talking about alarming issues but the film fails by not only keeping you glued to your seat but also by not talking about the issue as aggressively, or as sarcastically, to get a denier to introspect, let alone accept what may be wrong with their narrative.

Filmmaker Michael Moore once said about the first Trump campaign, that Hilary Clinton is trying too hard to outsmart Trump; you need to ‘out stupid’ him. While his administration may have been out-voted by Biden supporters, primarily because of their bad policies, speaking purely from a propagandist point of view, Moore’s words couldn’t have been truer. And if the film was not meant to highlight the impending doom and our reluctance to take it head-on then one wonders what the film is actually about.

At best, it’s a very stiff take on a grave issue. Stiff because the kind of freedom producers and writers could have taken with such stellar performers is marred by a very ordinary script, limiting the film to typical narrative tropes, which are funny at times, but mostly fall flat. Moments such as when the serving General charges guests for free snacks and Dibiasky continues to not get over it throughout the film were genuinely funny and so was the American war veteran shooting the meteor with an automatic weapon.  Beyond that, the film doesn’t have much to offer as much as it tries to explore other lateral issues such as the class conflict through Dr Mindy’s newfound fame and his steamy affair with a blonde news anchor.

Both Leo and Jennifer fit their roles like a glove. Although there’s no official confirmation of whether Leo did gain weight for Mindy’s character or not, his commitment to be a reluctant, nerdy professor who has kids going to college came through clearly. Streep like always doesn’t disappoint, but in this case, her character was so roughly sketched out that she almost became a side character despite playing President, getting enough screen time and being Meryl Streep.

The problem with Don’t Look Up is quite basic and complex at the same time, and I fear it may become endemic to all films and filmmakers picking up pressing issues to tell their stories. The film is quite unsure whether it wants to be a holiday season entertainer or a dark, edgy and satirical take addressing a very relatable crisis, and it spends its entire run time trying to figure itself out. Netflix could have really done with a little more imagination, something that Dr Sagan, who also gets a shout in the film, often stressed upon. Otherwise, sticking to hiring Dwayne Johnson and Gal Gadot for such filler Christmas specials seems like their best bet.