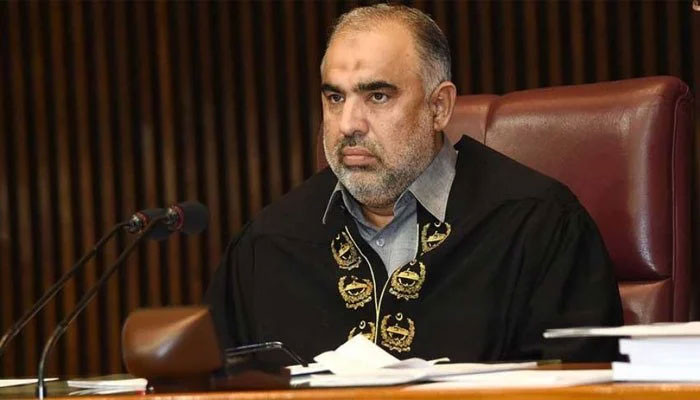 PESHAWAR: Election Commission of Pakistan has summoned National Assembly Speaker Asad Qaiser over violation of code of conduct for the local government elections and ordered forensic analysis of his alleged audiotape aired on television.

An official of the ECP said that Asad Qaiser had been asked to appear before the district monitoring officer, Swabi, on December 13.

The DMO Swabi, Sardar Mazhar Hussain, in a letter to Asad Qaiser, stated that he had come to know through media reports that there was an alleged audio aired on TV channel in which the speaker was not only asking voters in terms of development projects but also promising party candidate of huge funds, saying that multi-million projects were in process and would be notified soon.

The DMO asked the speaker to appear in person or through his counsel on December 13 to explain his position as it is in violation of the code of conduct under the Elections Act.

The DMO, Swabi, also sent a letter to the chairman Pemra for forensic analysis of the audiotape and submission of report by December 15.

Apart from ministers and lawmakers of Khyber Pakhtunkhwa, the Election Commission of Pakistan on Friday imposed Rs50,000 fine each on chairman Pakistan People’s Party Bilawal Bhutto Zardari and Chief Minister Sindh Murad Ali Shah for violation of the code of conduct during the local government polls in KP.

The ECP on Friday also imposed a fine on a number of other lawmakers of PPP, Khurshid Shah, Saeed Ghani, Nisar Ahmad Khoro and Qadir Patel for addressing public meetings in Peshawar despite announcement of schedule for the LG polls in 17 districts of KP.

Among others, Federal Minister for Kashmir Affairs and Gilgit-Baltistan Ali Amin Gandapur was fined Rs50,000, JUI-F leader Maulana Lutfur Rehman was fined Rs10,000 while MPA Ahmad Karim Kundi was fined Rs30,000 the other day for violating the code of conduct. The violations of the conduct, however, continued in different parts of the KP.