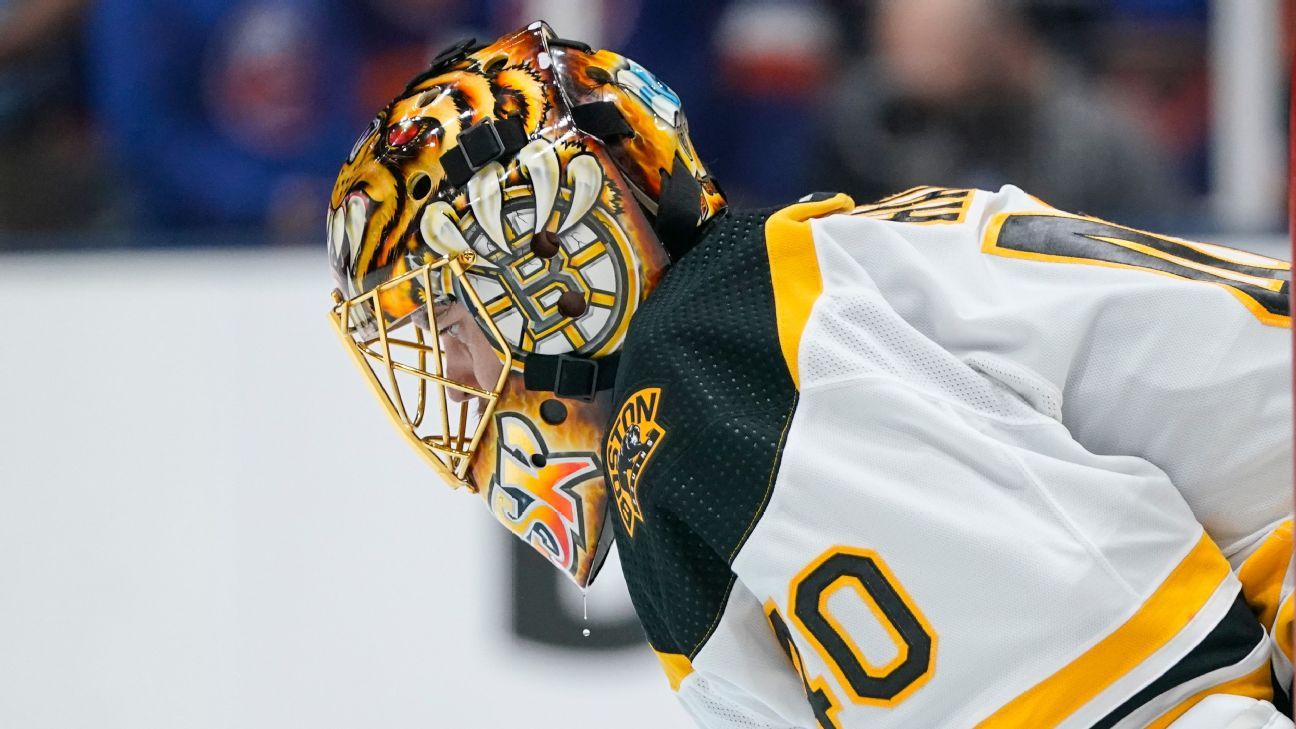 Crisp new calendar, clean slate, right? While the 2021-22 season is well underway, there’s still a sense of renewal in ringing in a new year, bursting with fresh opportunities. In taking a break from the enduring frustration of remaining competitive amidst game postponements and losing individual players to the league’s COVID-19 protocol, here are a few fearless — and some less bold — fantasy-relevant predictions to help usher in 2022.

Tuukka Rask will be worth a fantasy stash: Roster flexibility permitting, of course. Signed to a professional tryout agreement in the AHL, Rask could be back in Boston’s crease before you know it (allowing for a few turns in Providence first). If history serves as prophecy, the 34-year-old will make his squad-for-life better. Don’t take my word for it; ESPN’s Greg Wyshynski thoroughly outlines why (E+) here. And if Rask’s comeback indeed blossoms in storybook fashion, Linus Ullmark and (especially) Jeremy Swayman will inevitably see less playing time. Food for thought for their respective fantasy managers, along those in the goaltending dumps. You could do worse than roll the dice one of the best netminders since 2009.

Postgame analysis and highlight show airing each night throughout the season from Barry Melrose and Linda Cohn. Watch on ESPN+

Jack Hughes will continue to shine: Not to the blinding luminance of three goals and six assists in four recent games, mind you, but brightly enough. Circumstances are in place to nearly ensure as much. Since losing several weeks to a shoulder injury, Hughes has been enjoying hefty, high-quality top-line/powerplay minutes, rounding out to 19:45 per game since Dec. 8. He’s shooting more than ever, averaging 3.9 shots per contest since Dec. 16. Most appealing perhaps, as discussed by ESPN’s Emily Kaplan, is that the 2019 No. 1 draft pick is finally feeling confident, empowered and happy. Nothing replaces a good dose of healthy swagger when it comes to competing at the highest level of any game. Hughes’ roommate Ty Smith believes the third-year player could put up 100 points at some stage. Not this year, but don’t be surprised if he continues to contribute at a good clip from now until spring. The 20-year-old remains there for the acquiring in 42% of ESPN.com fantasy leagues, while linemates Jesper Bratt and Yegor Sharangovich (COVID-19 protocol at present) are largely available.

Forward Max Comtois will enjoy a strong second half: Nowhere to go but up, really. Playing in agony before being sidelined with a confirmed broken hand in early/mid November, the young forward had the roughest of starts to what was supposed to be his coming-out-party in Anaheim. Fast-forward through a needed round of surgery and brief mini-break via the league’s COVID-19 protocol, and Comtois is revved up for a start fresh. Two assists through two games on a top line suggest; so far, so good. I like the 22-year-old a lot as a well-rounded fantasy asset, particularly while he sticks within the Ducks’ top six. Which appears in the cards, as long as Adam Henrique remains sidelined, if not longer. Finally healthy, Comtois is obtainable in more than half of ESPN.com fantasy leagues.

Jordan Kyrou will earn more valuable minutes: Competing on a dynamite scoring line with Robert Thomas and Vladimir Tarasenko, the 23-year-old has four goals and four assists in three games. Coach Craig Berube can’t feel the least bit inclined to mess with that unit, once Tarasenko is back out of COVID-19 protocol. What’s even more fun is that Kyrou has ascended to top of his club’s scoring table with 1.10 points/game despite seeing fewer minutes than any other top-six heavyweight in St. Louis. Only 16:13 since December’s launch, to be precise. My 2022 crystal ball shows more quality minutes — including with the extra skater — are in Kyrou’s immediate future. And the fantasy darling remains available in more than a third of ESPN.com leagues. (Not in any of mine, unfortunately.)

Evander Kane will play in the NHL this season: Not in the immediate future, considering all that’s involved, but before the regular season wraps up. As we’re reminded on the regular, NHL teams are in the business of winning games. Having a glance at his eight points in four recent contests with the AHL Barracuda, Kane still proves capable of boosting that cause. Once recovered from COVID-19 and out of protocol, and once the club finds a trading partner — a reunion with the Sharks seems much, much less likely — the scoring winger is predicted to be offered a chance elsewhere. Word out of the Barracuda’s dressing room is that the 30-year-old has been a good teammate to date. That helps. A fantasy gem, Kane led the Sharks with 22 goals and 27 assists in 56 contests last year. He’s available in 77% of ESPN.com leagues. Do with that what you will.

Tristan Jarry will elbow his way into legitimate Vezina conversation: Pittsburgh’s best player to date is in for a smoother ride through the winter months, as his squad is bolstered by the return of several key figures. Forward Bryan Rust is back (is he ever) after losing more than a month to injury. Jake Guentzel is healthy again following a shorter absence. Sidney Crosby appears his old productive self after a rather plodding, injury-riddled start to the season. Plus, perhaps burying the lede here, Evgeni Malkin (knee) is due to make his season debut any day now. Having these reinforcements out front only makes Jarry’s job easier. A gig he’s already handled with aplomb, in boasting a .934 SV% and 1.89 GAA through 25 appearances. The 26-year-old is only two shy of league leader Andrei Vasilevskiy in wins, and that’s in backstopping a group more decimated by injury than most. Oh, and he’s won six straight. If you’re willing to broker a blockbuster trade in acquiring an elite fantasy goaltender, think about setting your sights on the Penguins’ No. 1, though he won’t come cheap.

Noah Dobson will prove to be ridiculously valuable down the stretch: Equally enamored with this young skater as a gifted player and fantasy asset as I am puzzled by the lack of interest from managers, I’ll continue to trumpet Dobson as an underappreciated commodity until season’s close. This week’s campaign message is available here. For those still bizarrely unconvinced, how about this: The Islanders have played fewer games than any other team in the NHL, with only 28 in the books. Vegas and Anaheim have hammered out 36. That adds up to a good number of contests to make up between now and spring (February is going to be busy). Which means a lot more opportunity for Dobson to strut his fantasy stuff. Rostered in 25.5% of leagues, the young defender has averaged 2.2 fantasy points/game in ESPN.com’s standard competition this season.

Mike Smith will disappoint his fantasy managers more often than not: It appears rather bleak in Edmonton for good reason. Even when the Oilers were 16-5-0, before the wheels blew off in December, the team allowed 2.90 goals per game. Which is manageable enough when averaging 3.81 to the good. But when the scoring dries up a bit as it did — as in when Connor McDavid and Leon Draisaitl perform in more mortal-like fashion — that goals-against rate won’t cut it. Edmonton isn’t strong enough defensively to win more often than not, regardless of whether Mikko Koskinen, Smith or even Stuart Skinner sits in net. So even if the 39-year-old can stay healthy — a big if in light of this season’s issues already — Smith could be in for a rough go from now until the buds bloom. At least until there are considerable changes on the ice/behind the bench. Worth mentioning since the veteran goalie is rostered in 68% of ESPN.com leagues.