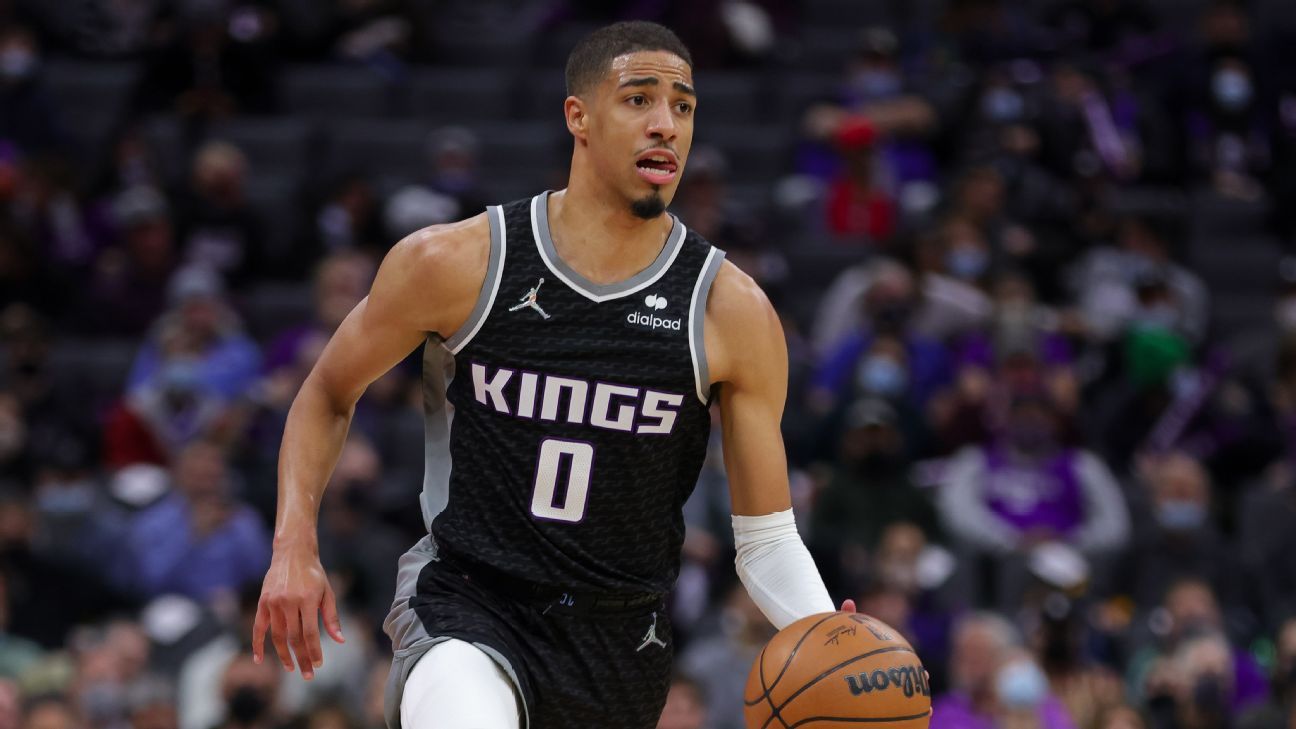 Who is trending up around the NBA? Which rotations are changing? What’s the latest with the notable injuries and players in health and safety protocol?

Here’s a look around the league at the most fantasy relevant news and notes for all 30 teams:

Atlanta Hawks: Lou Williams and Timothe Luwawu-Cabarrot joined Hawks teammates Trae Young, Danilo Gallinari and Clint Capela in the league’s COVID-19 health and safety protocol, further depleting their roster. Cam Reddish and Kevin Huerter will benefit most from more playing time. Reddish, who erupted for a career-high 34 points against Orlando on Wednesday, averages 20.7 points and 4.5 rebounds per 40 minutes and can be found in 93% of ESPN leagues. Huerter averages 15.2 points and 4.8 rebounds per 40 minutes, and he is available in 86.5% of ESPN leagues.

Boston Celtics: With seven players in the protocols, it’s likely that Robert Williams III (rostered in 85.1% of ESPN leagues) will play more minutes and see more usage. Williams has averaged 28 minutes per game this season, scoring 13.4 points and grabbing 11.8 rebounds per 40 minutes. Add him to your active lineup, especially while Enes Freedom is in the protocol.

Brooklyn Nets: David Duke Jr. has taken advantage of the additional minutes with 10 Nets in league protocols, including Kevin Durant and Kyrie Irving. The rookie out of Providence has started and played 30 or more minutes in each of the last three games, averaging 11.3 PPG, 10.3 RPG, 2.0 APG, 1.7 SPG and 1.3 BPG during that span. Duke Jr. is available in 99% of ESPN leagues.

Charlotte Hornets: Since players come in and out of the league’s health and safety protocols, Jalen McDaniels (0.5% rostered) is someone to add in deeper formats or to keep an eye on in shallower formats. McDaniels has averaged 16.7 minutes per game this year, but has been extremely productive when given more minutes. With a usage rate of only 13.5%, he averages 15 points, 8.8 rebounds, and 2.3 assists per 40 minutes.

Chicago Bulls: A sprained foot will keep Alex Caruso sidelined for 7-10 days, opening the door for more minutes for former lottery pick Coby White. The scoring guard has averaged 19.5 MPG, 5.4 rebounds and 3.0 assists per 40 minutes this season, and is available in 91.5% of ESPN leagues.

Cleveland Cavaliers: A very good short-term streamer for your hoops team, Cedi Osman can provide your team with points, rebounds, assists, steals and 3s while several Cavaliers are in COVID protocol, such as Jarrett Allen, Isaac Okoro and Evan Mobley. Osman is available in 96.4% of ESPN leagues.

Dallas Mavericks: Trey Burke and Luka Doncic entered the Mavericks’ protocols on Wednesday, bringing the total to six players. Burke is reportedly unvaccinated, which could result in an extended absence. Jalen Brunson, who has been one of the top 100 players in category formats over the last few weeks, will have an additional chance to shine while the others are out. Brunson has had four consecutive game with six or more assists, and he’s averaged 23.6 points per game over his last three.

Denver Nuggets: Facundo Campazzo has been solid over his last six games, averaging 8.3 PPG, 2.5 RPG, 6.3 APG, 1.3 SPG and 1.0 BPG. He is a great option for deeper formats since he is available in 96.5% of ESPN leagues. Despite Bones Hyland‘s potential breakout in the Nuggets backcourt, Campazzo is a consistent distributor posting lines similar to the ones J.J. Barea did in previous years with Dallas.

Detroit Pistons: Cade Cunningham entered the league’s health and safety protocols on Wednesday. With Killian Hayes still recovering from an illness, Saben Lee is set to get all the minutes he can handle. Lee has averaged 15.5 points, 6.0 rebounds and 5.5 steals per 40 minutes this season, and is available in 99.2% of ESPN leagues. (But not for long!)

Golden State Warriors: The Warriors could use Quinndary Weatherspoon a great deal after he signed a 10-day hardship contract because Jordan Poole, Andrew Wiggins, and Damion Lee entered the protocols. During training camp, he was with the team before joining the Warriors’ G-League affiliate in Santa Cruz. Weatherspoon, 25, was selected in the second round of the 2019 NBA Draft by the Spurs, and averaged 16 PPG, 4.3 RPG, 3.7 APG, 1.2 SPG and 0.7 BPG in nine G-League games this season. He’s on the streaming radar in deeper formats.

Houston Rockets: It is expected that Jalen Green will return to the Rockets on Thursday against the Pacers. A strained hamstring has kept the No. 2 overall pick out of action for a month. With 18 games played, Green has averaged 14 PPG, 3.1 RPG and 2.3 APG while struggling with efficiency (38.2 FG%, 27.8 3FG%). The flashy guard is still available in 40% of ESPN leagues.

Indiana Pacers: Malcolm Brogdon is listed on the injury report once again for Thursday’s game against the Rockets, leaving the Pacers incredibly thin at the point guard position since T.J. McConnell is out with a wrist injury as well. Chris Duarte could take on additional minutes and offensive responsibilities in his absence. He has averaged 28.7 MPG this season as the league’s oldest 2021 draft pick. Duarte has averaged 18 points, 5.8 rebounds and 2.9 assists per 40 minutes and is available in 82% of ESPN leagues.

LA Clippers: In his return to the court on Wednesday night against the Kings, Paul George remained an intriguing player to buy low on. Prior to being injured, he had a field goal percentage of 37% in his previous five games. The situation is likely to improve soon for George, and with a 33.4% USG, he can catapult himself into the top 10.

Los Angeles Lakers: With Anthony Davis out due to a knee injury, Talen Horton-Tucker is expected to get a lot of playing time. On Tuesday night, Horton-Tucker had a miserable performance against the Suns, with the silver lining being that he played 31 minutes. Horton-Tucker is available in 89% of ESPN leagues and should continue to see heavy usage. He has averaged 15 points, 6 rebounds and 3.8 assists per 40 minutes.

Memphis Grizzlies: Dillon Brooks is a reliable source of points this season and is available in 57% of ESPN leagues. With a USG of 29.5% and a true shooting percentage of 52.6%, he has averaged 20 points and 29 minutes a game this season. As long as you can handle his peaks and valleys, Brooks — who is coming off a career-year last season — can be a great pick-up.

Miami Heat: Over the last three games, Omer Yurtseven has averaged 6.3 PPG, 12.3 RPG, 1.3 BPG and 0.7 SPG. Dewayne Dedmon has been outplayed by the rookie, and Yurtseven could get even more minutes. He’s available in nearly all ESPN leagues and is worth adding in deeper formats.

Milwaukee Bucks: Bobby Portis, Giannis Antetokounmpo, Donte DiVincenzo and Wesley Matthews are currently in the protocol. It has allowed DeMarcus Cousins to be inserted into the starting lineup and he has delivered, stockpiling a combined 30 points and 20 rebounds in the last two games. He’ll remain on the streaming radar while Portis or rookie second-rounder Sandro Mamukelashvili are out. Cousins, the one time first-round talent in fantasy leagues, is available in 95% of ESPN leagues.

Minnesota Timberwolves: Malik Beasley has stepped up for the Timberwolves and fantasy managers with Patrick Beverley, Jarred Vanderbilt, Josh Okogie, Anthony Edwards and Taurean Prince in the protocols. Beasley has scored 10 or more points in three consecutive games and seven of his last nine games. Beasley is available in 63% of ESPN leagues, and he should be rostered while the Timberwolves are shorthanded.

New Orleans Pelicans: Josh Hart is having a career-best season, putting up 21.8 PPG, 3.4 RPG, 3.9 APG and 0.9 SPG. Hart, who happens to be one of the league’s top rebounding guards, should be rostered in all ESPN leagues yet is available in 68% of them. This month, he has scored 10 or more points in all six games.

New York Knicks: After undergoing ankle surgery, former league MVP Derrick Rose will be out for at least eight weeks. Evan Fournier stands to benefit the most during Rose’s prolonged absence. The veteran swingman could play anywhere from 35 to 40 minutes per game, which is a big deal because Fournier averages 18.4 points, 3.7 rebounds and 2.4 assists per 40 minutes this season. He’s still available in 45.6% of ESPN leagues.

Oklahoma City Thunder: The Thunder are one of a few teams in the league without a player missing a game due to COVID-19, and that’s a big deal because this rebuilding team needs a full roster to compete on a nightly basis. Everything starts with their star, and after a cold start to the season Shai Gilgeous-Alexander is playing well. During his last 10 games, Gilgeous-Alexander has averaged 24.7 PPG, 6.7 APG and 4.1 RPG.

Orlando Magic: Mo Bamba is one of six players on the Magic’s league protocol list. This makes rookie Franz Wagner a must-start. With 18.2 PPG, 5.5 RPG, and 3.8 APG in his last 10 games, Wagner has a chance to perform like a top 100 fantasy option, yet he remains available in 50% of ESPN leagues.

Philadelphia 76ers: Furkan Korkmaz has missed the last three games with the flu and is expected to play Thursday night against the Hawks. Korkmaz has a clear path to additional minutes with Danny Green, Andre Drummond, Shake Milton, and Georges Niang all in the health and safety protocol. Korkmaz has averaged 15 points, 5.1 rebounds and 4.3 assists per 40 minutes this season, and is available in 99% of ESPN leagues.

Phoenix Suns: Interestingly, JaVale McGee and Deandre Ayton have been able to coexist on the court from a fantasy perspective. Over his last five games, McGee has averaged 12.6 points and nine rebounds. If you need more depth at center or point and rebounds, he’s available in 86.7% of ESPN leagues.

Portland Trail Blazers: Don’t overlook Larry Nance Jr., who is available in 94% of ESPN leagues. The veteran forward has the rare ability to provide statistics across multiple statistical categories and has shown to be a steady source of steals throughout his career. In the last six games, Nance Jr. has averaged 7.5 PPG, 8.2 RPG, 2.5 APG, 1.7 SPG and 0.5 BPG in 29.5 MPG.

Sacramento Kings: Tyrese Haliburton has played exceptionally well over the last four games without De’Aaron Fox who is in the league protocols. Haliburton has averaged 23.5 points, 11.3 assists, 4.3 rebounds and 2 steals per game. Over the past two weeks, he has been a top-15 player in category formats. Perhaps this would be an ideal time to consider Haliburton’s trade offers.

San Antonio Spurs: Dejounte Murray had a triple-double against the Clippers on Monday night, his sixth of the season. He became the second player in Spurs franchise history with three triple-doubles in a single month after David Robinson in 1990. Admirable. The only other player in the NBA currently averaging at least 17 points, eight rebounds and eight assists is Luka Doncic.

Toronto Raptors: Having entered the league’s protocols, OG Anunoby joined Pascal Siakam, Dalano Banton, Fred VanVleet, Malachi Flynn, Scottie Barnes and Precious Achiuwa as the eighth Raptor to do so. Brooklyn has 10 players in the league’s medical protocol, the only team with more.

Utah Jazz: Royce O’Neale continues to go unnoticed in many leagues. In fact, he is available in 90% of ESPN leagues. Still, O’Neale is a reliable option for your hoops team who contributes to multiple categories. The last 10 games have seen him average 8.1 PPG, 6.1 RPG, 3.3 APG and 1.0 SPG in a healthy 30.4 MPG. Considering how many players are being added and removed from league protocols, O’Neale shouldn’t be overlooked.

Washington Wizards: It won’t be long before Rui Hachimura makes his season debut. The bigger question is what his role with the new-look Wizards will be in 2021-22. Last season, Hachimura averaged 14 PPG and 5.5 RPG in 31.5 MPG, but his playing time may not be as readily available given the amount of other frontcourt options on this year’s roster. He’s available in 94.4% of ESPN leagues.