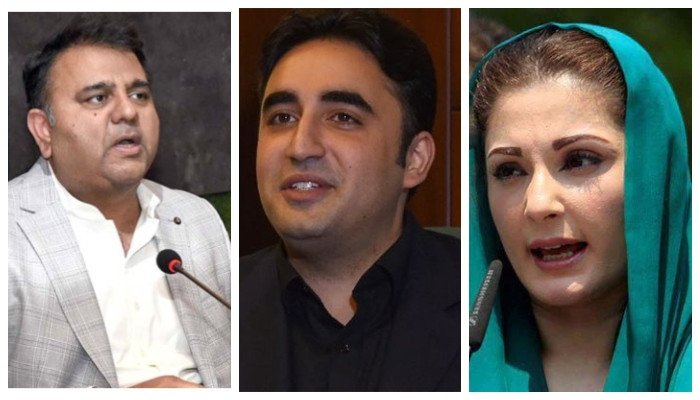 JHELUM: Federal Minister for Information and Broadcasting Fawad Chaudhry on Saturday took a jibe at PPP Chairman Bilawal Bhutto-Zardari and suggested he contest Karachi’s mayoral polls instead of the country’s general elections.

Fawad, while speaking during a press conference in Jhelum, said that Pakistan is a great country, therefore, it needs great leaders.

“The leadership of this great country cannot be handed over to naive people like Bilawal and Maryam Nawaz,” the minister said.

He added that since Bilawal is not “competent enough to contest the general elections, he may try his luck in Karachi’s mayoral polls instead.”

“Both Maryam and Bilawal should strive to climb up the ladder of their political careers,” Fawad said, adding that “Maryam does not have the stature to call herself a national leader.”

“Her [street power] depends on the students of Maulana Fazlur Rehman’s madrassas alone,” he said.

Criticising the Opposition, the minister said that it had to face defeat in the Senate despite the PML-N and PPP “enjoying a so-called majority there.”

He went on to say that the Opposition “does not have any policy to abide by” as they talk about something else in the House and project a different narrative when they are outside.

“As far as the PTI is concerned, we have no political opponents; we are accountable to our voters, so PTI’s voters will dictate our policy,” he said.

Fawad also shed light on several other issues and reiterated the PTI-led government’s “resolve to eliminate all types of extremist elements from the country to ensure durable peace.”

He further added that the country’s security institutions, with the support of the nation, are “ready to deal with separatist elements.”

“Any kind of extremism, including religious extremism, is condemnable and media should play its positive role in this regard,” the minister stressed.

Regarding Prime Minister Imran Khan’s upcoming visit to China, he said that the trip will “help strengthen economic ties with the friendly and time-tested country.”

The minister said that PM Imran Khan has two more foreign visits scheduled during the current year which will improve Pakistan’s significance at an international level.

Regarding the country’s economy, Fawad said that “despite various challenges, our economy is on the right track and current year will bring more good news from the economic front.

“Our industry is flourishing and the agriculture sector has also witnessed a boom after a long period,” he said.

Welcoming the British decision of rejecting PML-N leader Nawaz Sharif’s visa application, he said “no stone will be left unturned to bring back the looted money of the nation.”

“The government will not step back from this agenda of accountability at any cost,” he said.