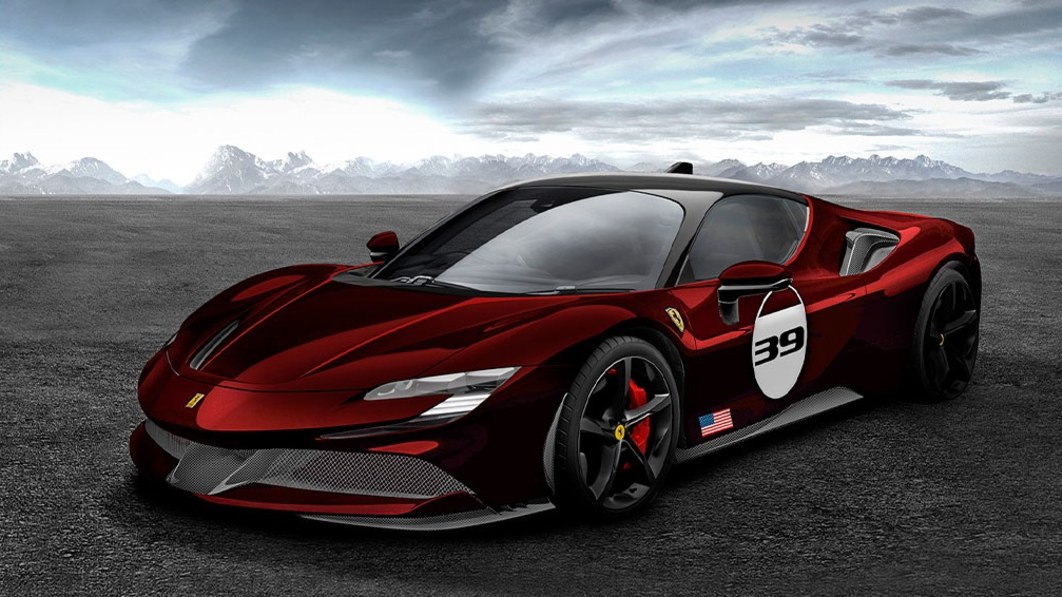 Ferrari is celebrating 10 years of its Cavalcade — an annual road trip that it organizes for its customers — by building five one-off models configured by its Tailor Made department. The second car in the series is a gorgeous SF90 Stradale inspired by Sicily’s Mount Etna.

Called Rosso Taormina, the one-off SF90 turns heads with a specific shade of red that we’re told draws inspiration from the charred slopes of the volcano that dominates the northeastern part of Sicily. It’s much darker than the typical Ferrari red; it borders on burgundy. The roof is painted in a glossy shade of black, like on the regular-production model, and some of the exterior carbon fiber trim pieces are left bare.

Red brake calipers visible behind black wheels add a finish touch to the design. The stratovolcano-inspired look continues inside with red upholstery, red accents on the seats, and red carpets, while a plaque positioned between the seats hints at the model’s rarity.

The plaque says “customer name” where the customer’s name should appear, meaning either that the owner wants to remain anonymous or that the car hasn’t been sold yet. Ferrari hasn’t revealed pricing, but keep in mind that the standard SF90 Stradale starts at over $500,000.

For the money, well-heeled enthusiasts get the most powerful road-going car that the Prancing Horse has ever built. It’s powered by a 986-horsepower plug-in hybrid powertrain that consists of a twin-turbocharged, 4.0-liter V8, an electric motor integrated into the eight-speed automatic transmission, and a pair of electric motors that zap the front wheels. Ferrari quotes a 2.5-second sprint from zero to 60 mph.

Like the first car in the series, an 812 Competizione called Blu Capri, the SF90 is a tribute to some of the Italian sights that the Cavalcade has passed through in the past decade. There are three more cars left to discover, and odds are they’ll be unveiled in the coming months.