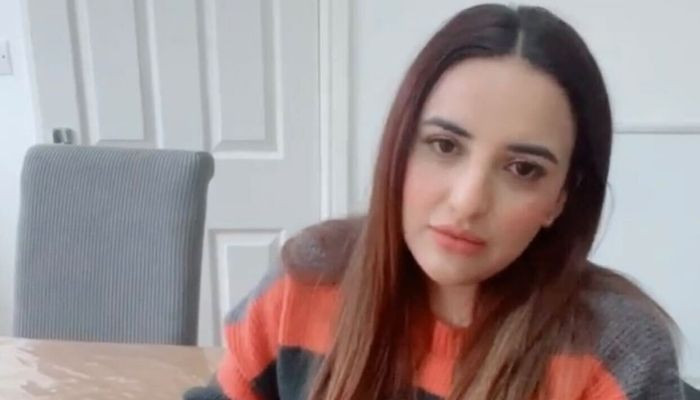 Famous TikTokker Hareem Shah has claimed that the FIA wants to take revenge against her by “dragging” her husband into the case and levelling false allegations against him, saying nothing was proved against her in court.

Hareem told Geo News that the FIA tried “every tactic in the book” to deport her from London and seize her bank accounts, but nothing worked. She expressed her sincere appreciation to the Supreme Court for announcing a verdict in her favour. She claims, however, that because the FIA was unable to collect evidence of fraud against her, “they are now targeting my husband, Bilal Shah.”

Hareem Shah stated that her husband’s record is spotless, with not a single FIR filed against him.

In response to the question about the allegation against Bilal Shah,  Hareem stated that her husband is accused of extortion, drug trafficking, and being a gangster, yet no FIR has ever been filed against him. “How is this possible?” she asked.

Hareem stated that the only organisation she respects is the Pakistan Army, and pleaded with the Army to help her.

“The FIA and the special branch are both worthless,” Hareem Shah stated.

According to Hareem, “extortion, corruption, and other crimes are rampant in police departments, particularly among officers in positions of authority.”

In response to a question about the vehicle her husband owns, which is said to be the one and only Pakistan, Hareem stated that her husband has always been a car lover and enjoys importing cars from other countries.

Additionally, she stated that her husband has been questioned regarding the apartment she recently purchased in Karachi and that she owns.

She stated that she is ready to provide FBR with all evidence of her property.

The FIA had launched a money-laundering probe against Hareem after a video of her claiming to have travelled abroad with a large sum of money went viral recently.

On January 10, 2022, the TikToker uploaded a video on social media in which she could be seen flaunting two stacks of British pounds.

At this, the FIA had announced that it had initiated an investigation over Hareem’s claim of having “successfully carried a hefty amount of money in cash to the United Kingdom” as against the law.

The FIA had decided to write a letter to the United Kingdom’s National Crime Agency (NCA) to take action against Shah.

An FIA spokesperson told Geo News that an investigation regarding Hareem’s travel to the UK was already underway, adding that the celebrity had herself confessed to laundering money to the UK, following which a probe was launched.