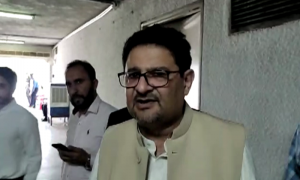 While speaking to reporters after a meeting of the Senate Standing Committee on Finance, Finance Minister Miftah Ismail expressed hope that an agreement with the International Monetary Fund (IMF) for the revival of the Extended Fund Facility (EFF) would be reached “within one or two days.”

Replying to the question of whether the prime minister was working on imposing taxes or giving relief to the masses, the minister said: “It depends on the kind of people they are. If they are well-to-do, then taxes will be applicable but the poor will be provided relief.”

Responding to a question, Miftah mentioned that the IMF did not have any objection to the increase in the salaries of the government employees.

So far, Pakistan and the IMF have not yet been able to reach close to a staff-level agreement for the revival of the loan program, leaving authorities in a tight spot to bridge the gap and get the updated federal budget for the fiscal year 2022-23 passed by the National Assembly.

The authorities in the finance ministry were expected to conclude the staff-level agreement by Sunday (June 19) on the basis of revenue and expenditure measures that could deliver next year’s primary budget (the difference between revenues and expenditures, excluding interest payment) in Rs152bn surplus.
However, the IMF staff still has reservations over the Rs9.5 trillion expenditures projected by the authorities for the next fiscal year. The revenue measures in the budget, according to IMF estimates, are also insufficient to deliver slightly over the Rs7tr target.

Pakistan is halfway through a $6 billion, 39-month IMF program that had been put on hold because of the lender’s worries about the status of some of its goals, including fiscal consolidation. If the review is successful, Pakistan will receive the next tranche of $900 million, and a green light from the IMF would also open up other global funding avenues.