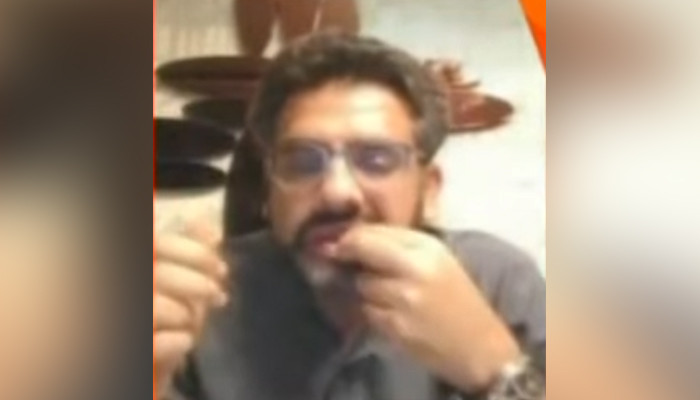 The finance ministry spokesperson, Muzzammil Aslam, on Friday found himself to be the subject of scorn and ridicule after footage of him chewing on snacks during a live television show began to circulate on social media.

Journalist Amber Rahim Shamsi termed the unfortunate moment the “dinner” portion of a day that had seen the Pakistan Embassy Serbia tweet out a 56-second music video criticising the government and Prime Minister Imran Khan over soaring inflation in the morning, and a mob lynching in the afternoon that ended in the brutal murder of a Sri Lankan factory manager.

“Pakistan: a tragicomedy in one day,” Shamsi wrote, in a thread, adding that the day culminated in the finance ministry spokesperson munching on what appears to be some nuts, amid a discussion on Geo News programme “Naya Pakistan” about the country’s economic blowout.

Twitter users piped in with all sorts of reactions, from guessing what he was eating to expressing sheer disgust at the non-seriousness of the move amid a serious debate.

One user guessed it was “peanuts” that he was munching on.

Another commented, addressing Shamsi: “Madam, he is eating pistachios and pine nuts and asking the nation to exercise patience.”

Yet another user said it was “disgusting” behaviour which looked “odd”.

This person, in an apparent broadside at the government, said that “it is not everyone’s forte to gather such characters”.

“MashaAllah, our economy is in very safe hands,” one person said sarcastically, with a clapping hands emoticon.

“Awkward” and “ill mannered sight” is how one user put it.

One however, advocated leniency saying its a “common habit” to munch on something during a “tense situation”.

“Yaar please forgive him,” he wrote.

Meanwhile, Aslam himself responded to the criticism by asking why it is acceptable to have tea during a live show but not something to eat.