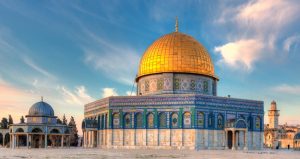 In a joint statement made after an emergency closed-door UN Security Council session, five European countries called for an end to tensions in occupied East Jerusalem following a weekend of violence that began when Israeli forces stormed Al Aqsa Mosque.

The United Arab Emirates and China did not join the statement, despite being among the countries that called Tuesday’s meeting. Although, Reem bint Ebrahim Al Hashimy, UAE Minister of State for International Cooperation, stressed the need “to immediately stop these events (and) provide full protection for worshippers.” She also called for “respect for the right of Palestinians to practice their religious rites, and halt any practices that violate the sanctity of Al-Aqsa Mosque.

The emergency Security Council session was also requested by Norway, France, and Ireland.
“Violence needs to stop immediately. Further civilian casualties must be prevented as a priority,” the statement by Ireland, France, Estonia, Norway, and Albania added.
“The status quo of the holy sites must be fully respected.”

The meeting comes after days of violence in and around Jerusalem’s Al Aqsa Mosque compound. To Jews, it is known as Temple Mount. For Muslims, Al Aqsa Mosque is the third-holiest site. Almost 170 people, mostly Palestinians, were wounded by the Israeli forces on Friday inside the mosque compound.

Meanwhile, US Secretary of State Antony Blinken also urged Israeli and Palestinian leaders on Tuesday to “end the cycle of violence”. In separate calls with Palestinian President Mahmud Abbas and Israeli Foreign Minister Yair Lapid, Blinken emphasized “the importance of Israelis and Palestinians working to end the cycle of violence in Israel, the West Bank, and Gaza by exercising restraint and refraining from actions that escalate tensions.”