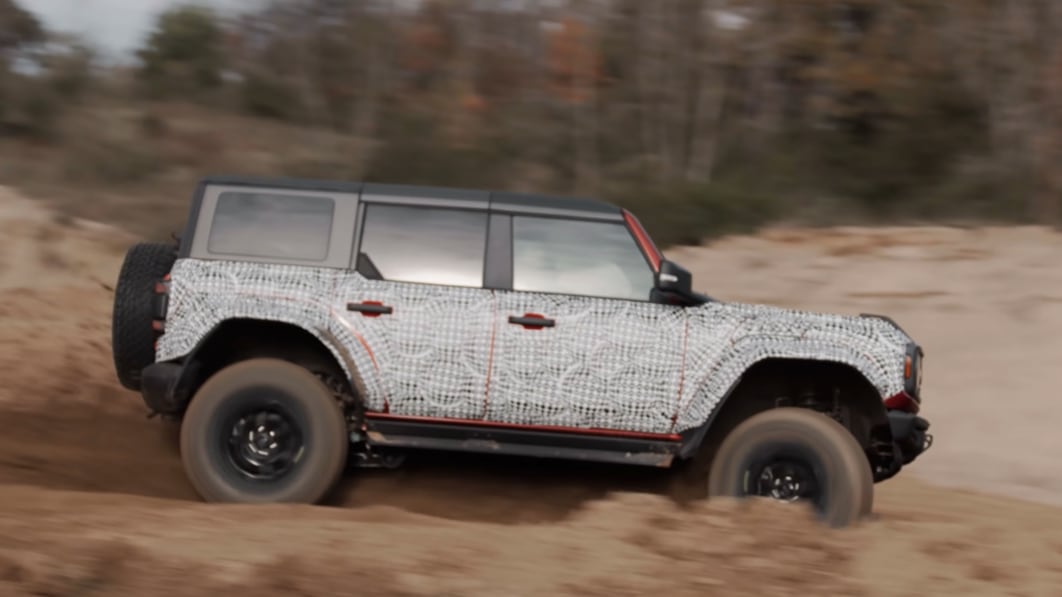 Last month we got still images of the coming Ford Bronco Raptor taken at an off-road track. This month we get a three-minute video of the Bronco Raptor running circles and kicking up dirt around that track, uploaded by Bronco Nation. Even better, there’s no soundtrack but the wind and whatever lives under the Bronco’s hood, which is certainly turbocharged. We’re still not sure which of Ford’s twin-turbocharged EcoBoost mills got clearance for duty here; there’s a 330-horsepower 2.7-liter in the standard Bronco, a 400-hp 3.0-liter in the Explorer ST, and a 450-hp 3.5-liter in the F-150 Raptor. Bronco Nation says we can expect at least 350 horsepower from the motor, so we’ll lean toward the 3.0-liter. Whatever it ends up being, its engine note is piped through a true dual exhaust that terminates ahead of the rear bumper, tucked up and out of the way of obstacles.

Toward the end, there are still shots revealing more of the truck’s undercarriage details. We get good looks at the reinforced steering rack, chunkier lower control arms and differential, the diff cover branded with an “R,” the coil-sprint rear suspension said to be Fox’s Live Wire twin-tube bypass dampers copying the F-150 Raptor. On the door sill, there’s a piece of masking tape with the word “Warthog” written on it. Ford could be trolling those of us who once thought the Raptor might be called Warthog, or there could still be plans to use that name somewhere, perhaps on a package. And at 2:52, the Bronco Raptor sits on its 37×12.50 R17 LT BFG KO2 tires next to a 2021 Bronco Outer Banks to make clear how much more it will bring to the table in every respect.

The Bronco Raptor reveal is expected in Q1 next year, the launch following in the summer.