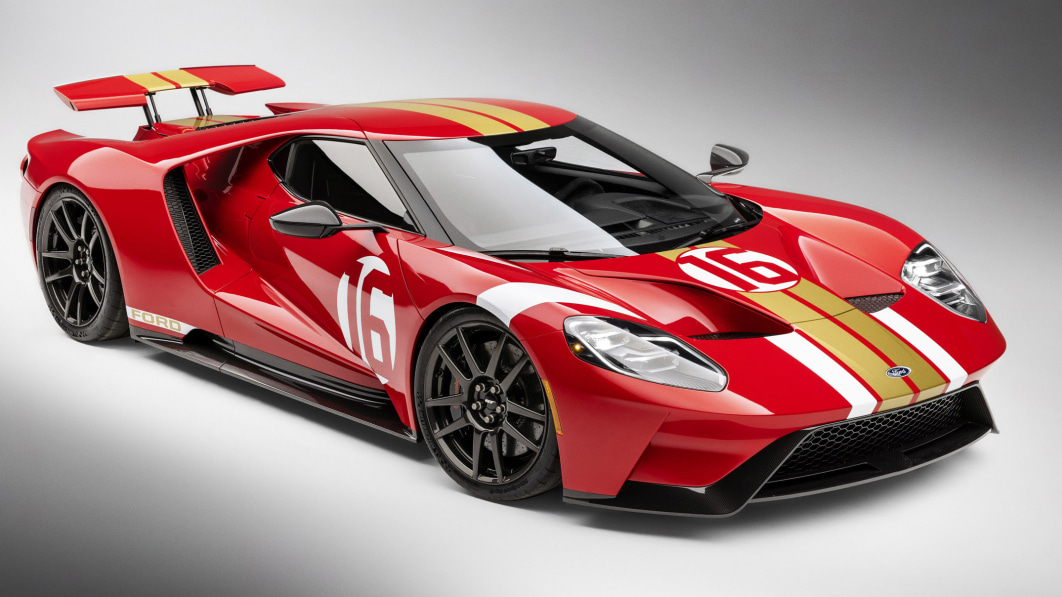 Of the six Heritage Editions Ford has released to celebrate the newest Ford GT, two have commemorated original GT40s from 1966. Here is the third, the Alan Mann Heritage Edition. It recalls the lightweight Ford GT40 experimental prototypes that Alan Mann Racing (AMR) created in England in 1966, referred to at the time as AM GT-1 and AM GT-2. Mann’s team reskinned the GT40 in aluminum and made a small number of mechanical changes to the MkI GT40 powered by the 289-cubic-inch V8, aiming at Le Mans that year. Of the five his crew ordered, he received just two before Ford shifted its attention to the GT40 MkII that used the 427-ci V8. AMR campaigned his two cars in Europe anyway. Although the pair never won a major race, Ford learned important lessons from what Mann had done, hence this carbon-fiber-bodied tip of the hat.

In December, the automaker teased a few lustrous red angles of the new GT accented with gold and Frozen White stripes, AMR’s signature colors. The revealed coupe is just as pretty as we suspected, those dual gold stripes running from tip to extendable tail. AM 1 raced with the number 16 in its roundel, reproduced here on the doors and hood as with the original, and again on the underside of the rear wing instead of on the top corner of the rear fender. Glistening black accents come in the exposed carbon fiber front splitter, mirrors, side sills, engine louvers and rear diffuser, and 20-inch wheels hiding lacquered black Brembo brake calipers.

Inside, more carbon fiber in places like the center console and vents mixes with Ebony Alcantara surfacing for the instrument panel, steering wheel, headliner and carbon seats. Contrast stitching in gold and red ties the cockpit to the exterior, as do gold appliques on the instrument panel, vent bezels and seat X-brace. The paddle shifters can’t be missed in Alan Mann Racing’s hot red.

Those heading to the Chicago Auto Show that runs from February 12-21 will get to see the original 1966 Alan Mann Racing AM GT-1 next to the 2022 GT Alan Mann Heritage Edition. Those who want to get even closer to the modern special in this final year of GT production are free to order the GT Heritage Edition from Ford after securing the necessary approval to be a GT customer. First deliveries happen this quarter. For folks with too much money parked in the Caymans, AM GT-1 crossed the block at Gooding & Co’s 2021 Pebble Beach auction, given a pre-sale estimate of $7 to $9 million but not selling, so there could still be an opportunity there.