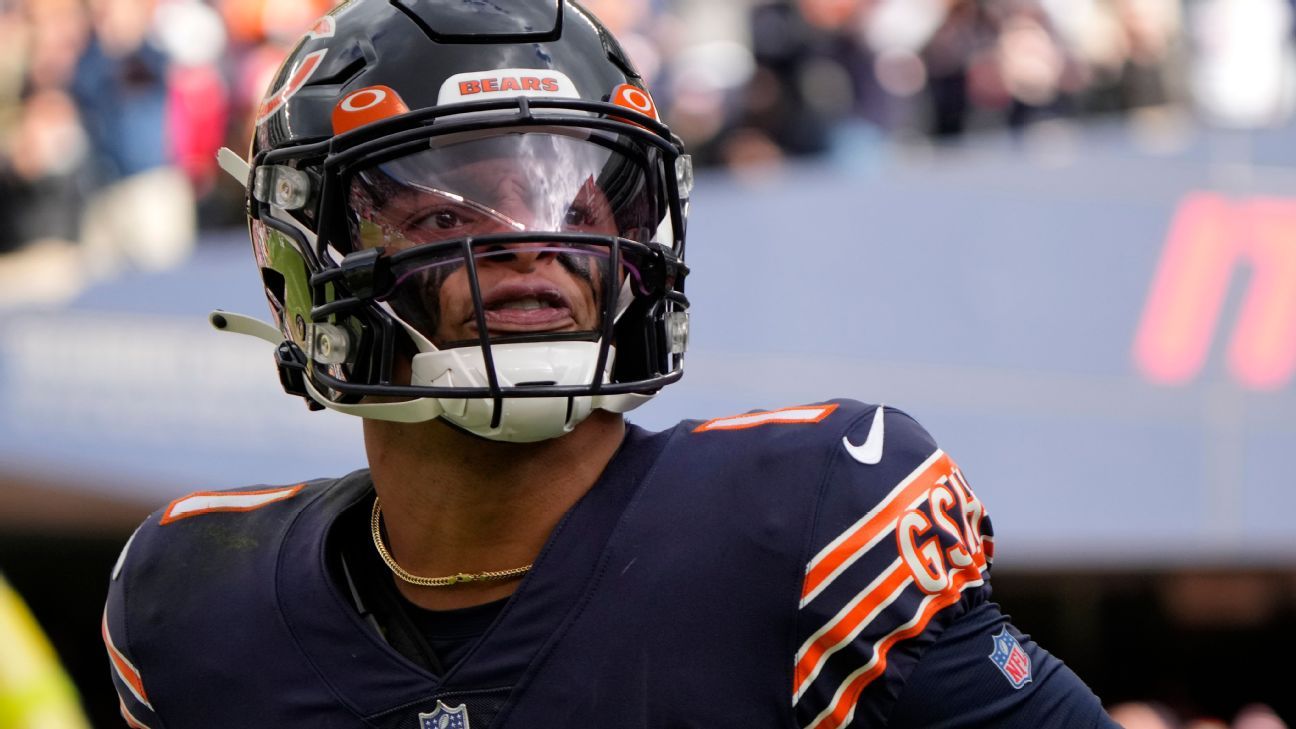 Chicago Bears quarterback Justin Fields has stumbled through the kind of season that leaves optimists picking through the weeds for hope. Last week, it was Bears coach Matt Nagy’s turn. Speaking to reporters after his team’s 45-30 loss to the Green Bay Packers, Nagy praised Fields for beating a blitz with an 11-yard floater to midfield on first down.

Fields has produced a number of other positive moments in nine starts, but the discrepancy between the ups and downs of his rookie season has been historic. His Total Quarterback Rating of 27.4 is the second worst this season, behind New York Jets rookie Zach Wilson, and it’s the fifth worst of any quarterback in NFL history who has started at least nine games in a season.

QBR was conceived in 2006, and the only quarterbacks who have posted a number worse than Fields in at least nine starts are Jimmy Clausen (2010), Blaine Gabbert (2011), Wilson and Josh Rosen (2018). You would have to scan past 75 names on the list of lowest QBRs in a season to find a quarterback who made a Pro Bowl roster at some time in his career, even as an alternate (Derek Carr, 2015 with a 43.1 QBR).

Fields has four games remaining to adjust the narrative, but as he prepares for Monday night’s matchup against the Minnesota Vikings (8:20 p.m. ET, ESPN), it’s worth peeling away the noise and looking at the carnage to this point from a dispassionate perspective. All statistics and rankings in this story are through Week 14.

It takes a village to swamp a franchise quarterback, so perhaps we should start with the situation surrounding Fields. In their attempt to ease his transition to the NFL, the Bears might have made it more difficult. As a team, they have attempted an NFL-low 136 passes on first down, when defenses are likely to be in their most neutral sets.

Although the Bears have averaged a decent 4.24 yards on first-down rushes, they have still set up Fields for too many predictable passes on second down. Opponents have blitzed the Bears on second down at a higher rate (32.4%) than any other team. After a 26-6 loss to the Cleveland Browns in Week 3, in which Fields went 0-for-6 with two sacks on second down, ESPN analyst Dan Orlovsky called the Bears’ game plan “the worst I’ve ever seen in my life.”

Although he hasn’t gotten much help from the Bears’ scheme, Fields has stumbled on his own in multiple areas. He has the NFL’s highest rates of interceptions and sacks, is tied for the league lead in fumbles and has been off target on the second-highest rate of his throws. And in the most important situations a quarterback faces — third down and in the red zone — he has been at his worst.

On 95 third-down plays, Fields has completed 33 passes, thrown six interceptions and been sacked 12 times. He has been off target on one out of every four throws, has taken a hit on 41.5% of the plays and converted three first downs via scrambles. 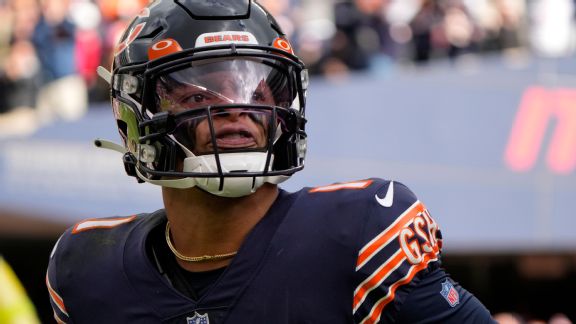 In the red zone, meanwhile, Fields has accounted for five touchdowns on 32 total plays, ranking No. 33 among qualified quarterbacks. For perspective, the Tampa Bay Buccaneers‘ Tom Brady leads the league with 27 touchdowns on 110 red zone plays.

Overall this season, Fields has been hit on an NFL-high 34.9% of his plays, whether they end up as passes, scrambles or designed runs. It’s fair to examine the role of pass protection amid the disaster of a highly mobile quarterback like Fields taking sacks and hits at a higher rate than any other quarterback. Unfortunately, the numbers don’t provide him much cover.

Among 38 quarterbacks with at least 100 pass attempts this season, Fields has the NFL’s third-highest pressure rate (36.1). But when backup Andy Dalton has played this season for the Bears, he has faced the league’s fourth-lowest pressure rate (23.5). In total this season, the Bears’ offensive line — which has worked through multiple injuries — ranks No. 9 in ESPN’s pass block win rate metric. Why the difference between Dalton and Fields? Is it possible the Bears have schemed and protected better for Dalton than Fields? Perhaps. But it’s worth noting that Fields has held the ball for an average of 2.87 seconds before throwing, seventh longest in the league. Dalton has thrown after an average of 2.61 seconds, a non-insignificant difference that means Fields gives pass rushers more time to apply pressure.

There is a lot to like about Fields, especially his creativity once a play breaks down. Packers quarterback Aaron Rodgers, in fact, suggested last week that Fields has some “star qualities” during an interview on the Pat McAfee Show. Fields ranks No. 8 in the NFL in expected points added (EPA) on designed runs and scrambles, and has more rushing yards (385) than any quarterback other than Lamar Jackson, Jalen Hurts and Josh Allen. He has suffered injuries to his ribs and left hand, but he has pushed through and does not appear to have been fazed by high-profile struggles in a big media market.

“That’s one of the hardest things,” Fields said, “[that] when you are losing, there are so many people saying this and that. But you have to look at positives and just build on that and just know this isn’t going to change overnight. You have to keep building. It’s going to be hard, but you just have to find the positive.”

An argument could be made that Fields’ worst games, in Week 3 against the Browns and Week 7 against the Buccaneers, are behind him. And to be sure, no quarterback should be written off after nine starts in a rookie season on a bad team. What we can do, however, is look at the history of quarterbacks who have struggled to a degree similar to Fields. QBR goes back 16 years, a full era in the quickly changing world of NFL quarterback play. In that time span, no one who has played at this level has elevated into a long-term answer for his team. That’s not to say Fields can’t. But if he does, he would be the first.