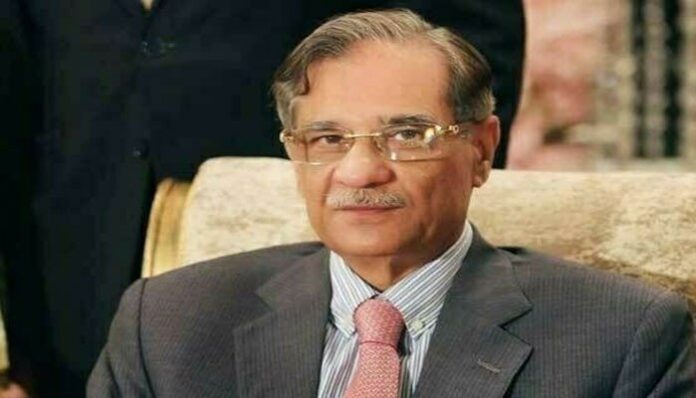 LONDON: Garret Discovery, an American-based firm that conducted the forensics of the alleged audio clip of former chief justice of Pakistan Saqib Nisar, said the FactFocus website commissioned it for the forensic examination of the clip and the certificate was issued after the professional forensic test requirements were met.

This alleged audio clip of the former chief justice suggests that ex-prime minister Nawaz Sharif and his daughter Maryam Nawaz were disqualified and jailed in violation of the law, to pave the way for the ruling PTI to come to power.

The release of the audio tape Sunday night caused a storm across the country, with some defending the audio clip while others criticising Justice (retd) Saqib Nisar.

Then, on Monday night, a private TV channel released a new clip, some parts of which showed that Nisar’s audio in the FactFocus story was the same as some of the words featured in the clip were the same he had used during a speech in Islamabad in 2018.

However, certain damning parts of the audio relating to the Sharifs have not been disputed yet.

Despite claims that the audio is fake, FactFocus insists it is authentic and was forensically tested as genuine and unedited.

It is understood that the forensic lab was asked to test the audio tape for any sort of editing, which includes additions, deletions or interventions by other software.

Talking to this correspondent, a spokesperson of Garret Discovery confirmed providing a certificate to its client FactFocus. The spokesman said, “We did work for FactFocus.”

When asked what was the task and the scope of the work that was assigned to the forensic laboratory, the spokesman said that Garret Discovery was not authorised to release parts of the forensic report to anyone without express consent from its client.

“As part of our standard agreement we have a confidentiality clause that prohibits us from speaking about the scope of work or the work we performed,” said the Garret Discovery spokesperson.

“We have no problem releasing details as long as our client signs an agreement allowing us to do so. Please contact FactFocus with any inquiries as to the work we performed and discuss with them any release of information. We will not comment anymore on this issue until that time,” he added.

When contacted by this reporter, Ahmed Noorani said that Garret Discovery had confirmed that the audio tape was authentic and that it had not been edited. The report was issued after a professional examination, he said.

Noorani said the authenticity of the tape was first confirmed through his own sources and means. He said when it was proven to be genuine only then Garret Discovery was hired for the formal certification of the audio tape.

“We knew that attempts would be made to discredit our investigation to save Nisar, so we got the forensic analysis done in advance from a leading US laboratory,” he disclosed.

“We released it along with the audio on our platforms after the lab certified its genuineness on all counts. Nisar and others, who think the audio is not genuine, are free to take legal action against me. I would welcome such action anywhere where the courts are not controlled,” he added.

The original audio released by FactFocus carried the following alleged audio of Saqib Nisar, making damning statements on how Nawaz Sharif and Maryam Nawaz were jailed in 2018:

“Saqib Nisar: Let me be a little blunt about it; unfortunately, here it is the ‘institutions’ who dictate judgments. In this case, we will have to penalize Mian Sahib. And ‘they’ say, “we shall bring Khan Sahib.” Regardless of the merit, we will have to do it, and even to his daughter.

“Other person: But, in my view, his daughter doesn’t merit a sentence.

“Saqib Nisar: You are absolutely correct. I did talk to “friends” that something should be done about this but they did not agree. There will be no independence of the judiciary, so let it be…”

As soon as the audio was released, ministers of the ruling party and Nisar’s supporters termed the audio as fake and an attack on Pakistani institutions.

The PML-N, on the other hand, said the audio clip is further vindication that Sharif and his daughter were prosecuted through judicial manipulation.

A private TV Channel said that it had obtained audio samples of Nisar from his public speeches which were similar to the FactFocus audio. These were the words and phrases that matched: “Let me be little blunt about it; absolutely correct; I said to my friends that something should be done about it but my friends didn’t agree. There will be no independence of the judiciary.”

However, the private channel or any other source has not yet countered the following words and phrases which are part of the leaked audio and which the FactFocus claims were said by Nisar about the Sharifs and Imran Khan.

These are: “Unfortunately, here it is the “institutions” who dictate judgments; In this case, we will have to penalise Mian Sahib; And ‘they’ say “we shall bring Khan Sahib; Regardless of the merit, we will have to do it, and even to his daughter; but, in my view, his daughter doesn’t merit a sentence. You are absolutely correct. I did talk to “friends” that something should be done about this but they did not agree. There will be no independence of the judiciary, so let it be…”

The former chief justice has said that he was considering taking the matter to the relevant legal forums. His supporters have said that the former chief justice is a man of integrity but his detractors point to a recent affidavit issued by former senior judge Justice (r) Rana Shamim, alleging that he witnessed Nisar issuing orders to two judicial officers to ensure that Nawaz and Maryam remained behind bars till 2018 general elections were over. Nisar countered this with the claim that Shamim had a personal issue against him.