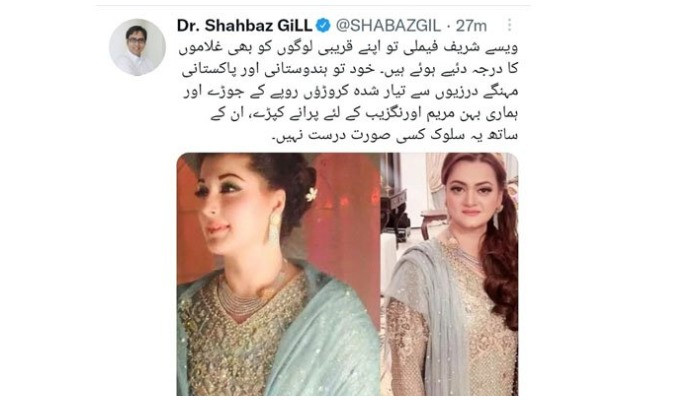 He compared Marriyum’s outfit with one Maryam was photographed wearing some time in the past.

Gill said that Maryam handed her “used clothes” to Marriyum and that the Sharif family treats its close members as “slaves”.

He did not stop there and went on to say that Maryam “gets her clothes designed by expensive Pakistani and Indian designers while giving old  clothes to Marriyum Aurangzeb”.

The tweet evoked sharp reactions from netizens and was later deleted by Gill.

Journalist Benazir Shah tweeted saying: “It is troubling that the ruling party thinks Mr Gill is a good fit for any public office.”

Social media user, Saman Amjad, wrote about a student who refused to receive her degree from Gill at a convocation and said that she made the right decision as he is “illiterate”.

Another user wrote: “[…] no matter how educated a person is, if the upbringing isn’t good, one can never be a decent person!!”

Another netizen, replying to Benazir Shah, wrote that it is not the ruling party but “PM Imran Khan himself” who thinks that Gill is a good fit for the office “to represent his true mindset”.

This is not the first time Gill has negatively commented on the Sharif family’s outfits.