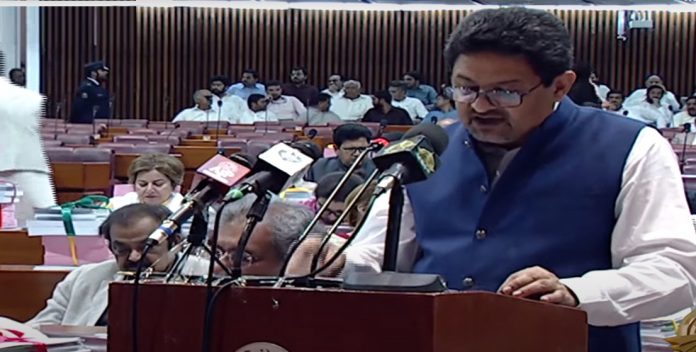 The Pakistan Muslim League-Nawaz (PML-N)-led coalition government has presented its “growth and investment-oriented” budget for the Fiscal Year 2022-23 in the National Assembly.
While maintaining the tradition of blaming previous governments, Finance Minister Miftah Ismail presented the Rs 9.5 Trillion Federal budget for 2022-23 in the lower house. He criticized the previous government and its “inexperienced team” for bringing the country to the verge of economic disaster.

The following is a list of allocations made out of a total budget of Rs9.502 trillion:

Moreover, people earning less than Rs40,000 would be paid Rs2,000 per month in relief due to high petroleum prices, according to Miftah, and this will continue in the FY23 budget. He also mentioned that the government has established a pension fund and released Rs10 billion for it.
The salaried class’s taxable income limit would be enhanced from Rs0.6 million to Rs1.2 million.

15% raise in salaries of govt employees
The finance minister revealed that, as a result of the country’s high inflation, the government has increased salaries for its employees by 15%, with pensions also increasing by 5%.

He also mentioned that FBR revenue has been estimated at Rs7,004 billion for the next fiscal year. “This includes Rs4,100 billion share of provinces. The net revenue with the federal government will be Rs4,904 billion. The non-tax revenue will be Rs2,000 billion.”

While stating that austerity is the government’s main priority, he stated that cabinet members’ and government officials’ petrol quotas will be lowered by 40%. There will also be a restriction on government-funded international tours, with the exception of the most important ones.

Miftah Ismail stated that 21 billion rupees had been set aside to boost agriculture and livestock productivity. He stated that the Ministry of Food Security, in consultation with the Planning Commission and the provinces, has developed a three-year growth strategy. This plan aims to increase agri-production, increase farmer prosperity, and promote smart agriculture and self-sufficiency.

A new fixed income and sales tax system is also being introduced for small retailers. Under this system, taxes ranging from 3,000 rupees to 10,000 rupees will be collected through electricity bills. This will be a final settlement and FBR will not be entitled to ask any questions about this tax.
The federal government has also decided to levy taxes on anyone who sends money overseas using credit, debit, or pre-paid cards.
Non-filers who acquire cars now face tax rates ranging from 100 to 200 percent, according to the federal government. In addition, the government has suggested a 2% advance tax on 1,600 cars and a 2% additional tax on cars with electronic engines.

Despite the constraints imposed by the IMF, the government claims to have proposed a pro-people, pro-business, and progressive Federal Budget for 2022-23. It will pursue policies aimed at fiscal consolidation to contain the budget deficit.
With its focus on exports and agriculture, the government claims that this budget will “set the framework for future growth budgets.”