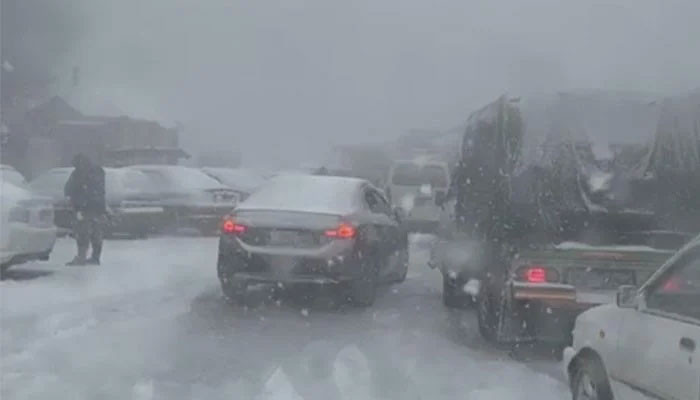 MURREE: In a bid to evacuate tourists from Murree amid snowstorm forecast, the government has decided to seek help from civil-armed forces.

In a video message on Twitter, Interior Minister Sheikh Rasheed said that the government has decided to seek “undeclared” help from civil-armed forces to evacuate the tourists from the area.

He admitted that despite their 12-hour efforts, they could not restore traffic in the city as a large number of vehicles have entered the hill station.

The interior minister said that he was personally overseeing the matter, adding that Punjab and the federal governments were also monitoring the situation.

He said that thousands of people were left stranded on the streets amid the chilly weather and urged the local people to help the tourists.

It is pertinent to mention here that thousands of tourists were left stranded as the routes to Malka-e-Kohsar were closed due to heavy snowfall.

For the last two days, continuous snowfall has been taking place in Murree, and with that, hundreds of thousands of tourists are heading towards the town.

Geo News, citing officials, reported that an estimated 125,000 vehicles have entered the city so far, due to which severe traffic jam was witnessed on the roads. In view of the emergency situation, the administration has decided to close all the roads leading to Murree.

Rawalpindi deputy commissioner has confirmed that that the roads leading to the tourist site has been blocked at Bhara Kahu tool plaza to deal with the situation.

Thousands of tourists, including women and children, have been trapped on the roads in the area since last night. Officials of the traffic police, however, were making their efforts to restore the flow of traffic on the roads.

The tourists have demanded of the government to help evacuate them from the area.

Taking to Twitter, Rawalpindi deputy commissioner said, “Around 23000 vehicles have been evacuated safely from Murree. Around 1000 are still stranded.”

He maintained that the district admin is working round the clock to evacuate the remaining vehicles safely.

Govt appeals to postpone plan for a few days

Earlier, Sheikh Rasheed had appealed to the tourists, especially families, to refrain from travelling to Murree and Galyat.

He had maintained that the tourists will not be allowed to go 17 Mile Interchange. However, citizens with an extreme emergency will be granted permission to travel to Murree and Galyat.

Taking to Twitter, Information Minister Fawad Chaudhry said that a large number of vehicles were heading towards Murree and other hilly areas, adding that it was impossible for the local administration to facilitate them. He urged the people to postpone their plan for a few days.