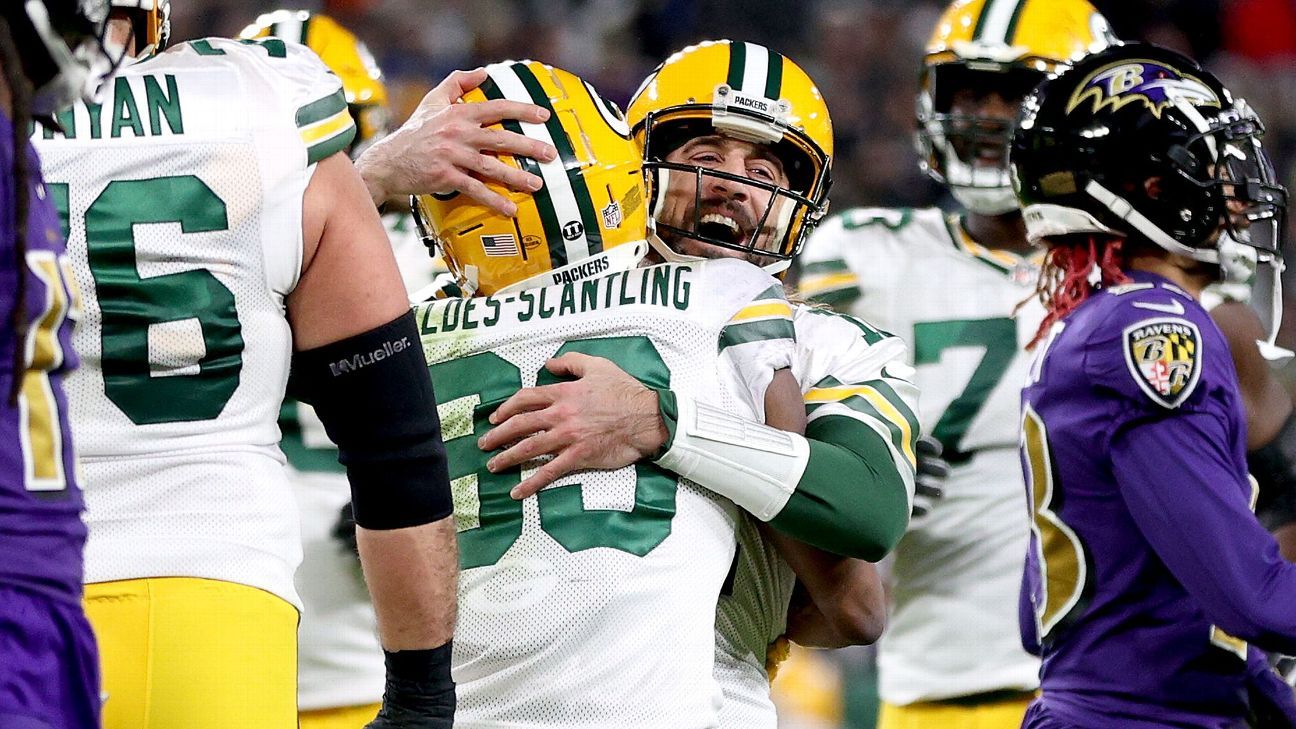 BALTIMORE — All Matt LaFleur does is win division titles. In his three years as the Green Bay Packers coach, three times they’ve won the NFC North.

And just about everybody in green and gold left M&T Bank Stadium on Sunday with what they wanted — a 31-30 victory over the Lamar Jackson-less Baltimore Ravens. The win was secured after the Ravens failed to convert on a 2-point conversion that would have given them a 1-point lead with 45 seconds left.

It was the second time in three games that Baltimore opted to go for the win over a tie with a 2-point conversion attempt and failed. The Ravens lost to the Pittsburgh Steelers earlier this month after failing to convert when down one point with 12 seconds left.

The Packers (11-3) clinched the division title, giving them an automatic playoff berth, and stayed on track for the No. 1 seed in the NFC playoffs with three games to go. And Rodgers matched the man he replaced as Packers quarterback in 2008.

Greg Jennings caught Rodgers’ first touchdown 14 years ago in Dallas, and Marquez Valdes-Scantling caught No. 442 as Rodgers tied Favre. Rodgers did it in 45 fewer games as he set the mark in his 210th game (203rd as a starter), while Favre needed 255 games (and 253 starts) over 16 seasons. Rodgers is in his 17th season but did not become a starter until his fourth year.

Rodgers has also thrown 193 fewer interceptions in his career than Favre threw as a member of the Packers.

Rodgers entered the game needing three touchdown passes to tie the record and four to break it. He threw his first of the game, No. 440 of his career, on a 3-yard out to Davante Adams to tie the game at 14-14 in the second quarter. It was also his 65th career touchdown to Adams, which tied Rodgers and Adams with Rodgers and Jordy Nelson for the most touchdowns by a quarterback-receiver duo in Packers history. The second one, No. 441, came on the opening drive of the second quarter when he bought time and looped a 9-yarder to Aaron Jones for a 21-14 lead.

The third one, the record-tying No. 442, was an 11-yarder to Valdes-Scantling with 12:54 left in the fourth quarter for a 28-17 lead. Rodgers nearly had a fourth touchdown pass for the outright record, but he and Allen Lazard just missed on what would have been an 11-yarder midway through the fourth quarter.

Now, Rodgers gets to try to break the mark at home against the Browns on Christmas Day.