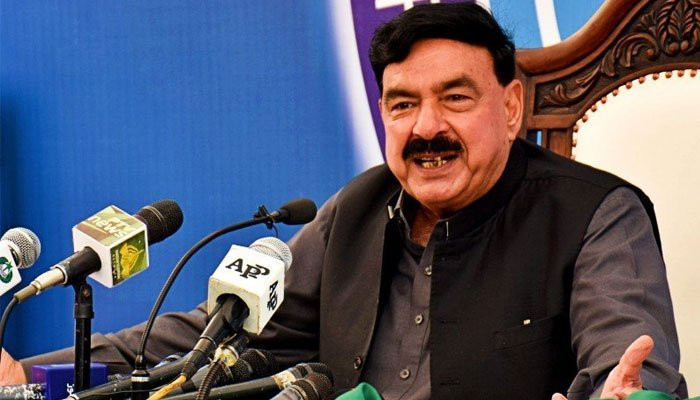 ISLAMABAD: Minister for Interior Sheikh Rasheed Ahmed on Wednesday once again took a swipe at PML-N supremo Nawaz Sharif and called him a “hapless” person who “wants to stay in London on the basis of a fake medical report.

The minister was referring to a fresh medical report submitted by the PML-N at the Lahore High Court (LHC), according to which the doctors have advised him to not travel.

“He [Sharif] wants to deceive people by asking them to march to Islamabad while the country is undergoing the threat of the coronavirus pandemic,” the minister said.

Rasheed went on to say that the Opposition may “fulfil its desire” but it is unable to function anymore because its “ring pistons have become rusted”.

While speaking about the reports of bringing a presidential system in the country, Rasheed said that these are just rumours.

“Neither a presidential system nor an emergency is being enforced [in the country],” he said. “News related to Opposition’s sit-ins, no-confidence motion, or a deal — are all fake.”

“If anyone is interested in bringing a no-confidence motion against the prime minister they may pursue it because it is them who have to gather enough support for it,” Rasheed said, adding that the government has never faced defeat in passing a bill during the last three-and-a-half years.

When asked about the banned TTP, Rasheed said that the group has
“increased terror activities.”

He said that “two TTP terrorists have been killed in Islamabad.”

Rasheed reiterated that the banned outfit has been making demands that the government cannot accept.

The minister further stated that all the four provincial chief secretaries and inspector generals of police have been alerted regarding the country’s security situation.