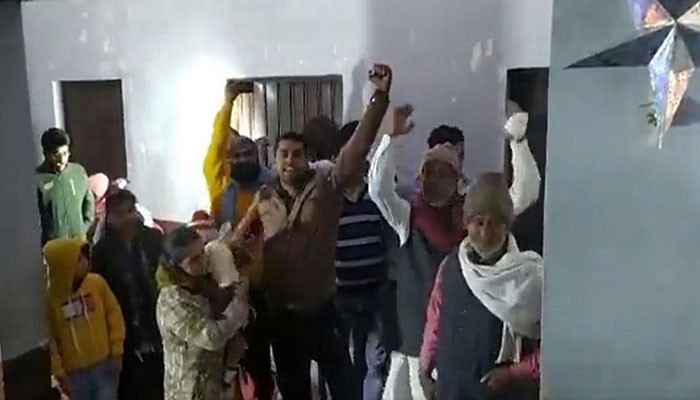 NEW DELHI: In a latest attack by Hindu extremists targeting Christians in Indian state of Karnataka, a group of men barged into a school and disrupted Christmas celebrations in progress inside.

A video of the attack is doing the rounds on the social media, Kashmir Media Service reported.

Narrating the sequence of events that led to the attack, headmistress of the school, Kanika Francis Mary, disclosed that the initiative for the celebration was taken by the students. She was quoted by media as saying, “The students had voluntarily pooled in money and ordered a cake, to which one of the parents has objected.”

Elaborating on the whole issue, she disclosed that they had been organising the Christmas celebrations every year as a routine. Last year, due to Covid-induced restrictions, we had decided to call it off last year.

This year, they agreed to organise a small celebration at the insistence of our students.

According to the media reports, the parents of one of the students complained to a Hindu extremist group that the school was “preaching Christianity”. Their grouse was that the school celebrates Christmas, but not Hindu festivals.

In the viral video, the intruders can be seen asking why the school was not holding celebrations on Hindu festivals.

During the scuffle, a member of the gang sounded intimidating when he said, “We are leaving this decision (matter) to you, parents. If we take this into our own hands, the situation will be different.” Consequently, the school administration is said to have decided to follow-up the matter with a police complaint.

“They delivered a scathing attack on us. The Hindu activists said they will hang a photo of Goddess Saraswati in our institution and also ordered us to celebrate Ganesh Chathurthi festival on the school premises. They made allegations against us that we are carrying out conversions in the institution,” the headmistress told media.

The attack took place on a day the Karnataka Assembly passed an anti-conversion Bill effectively putting a blanket ban on preaching of religion. The move came amidst unfounded allegations of conversion against churches and Christian priests.

The rights groups and minority community leaders joined the Opposition in the state to register their protest against the legislation which curtails one of the fundament rights of citizens enshrined in the Constitution.

They slammed the government for introducing a law that goes against the very spirit of the Constitution which guarantees right to practice and propagate religion.