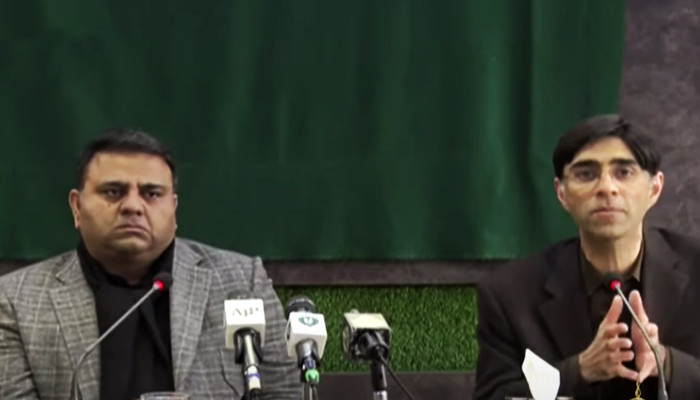 Addressing a press conference in Islamabad, Minister for Information and Broadcasting Fawad Chaudhary, along with National Security Adviser Moeed Yusuf, shared the developments and details of the policy.

“After the NSC’s endorsement of Pakistan’s first-ever National Security Policy yesterday, the Cabinet has approved it today. It is a truly historic achievement; a citizen-centric comprehensive [national security] policy with economic security at the core will now be pursued in earnest,” Moeed later said in a tweet.

He also thanked the country’s civil and military leadership for all their support and input.

“The Policy would not have seen the light of day without the Prime Minister’s constant leadership and encouragement,” he said.

Shedding light on the newly-devised policy, Yusuf said that the approved policy is the first-ever in the history of Pakistan, adding that it is comprehensive in nature and prioritises the security of the common man.

“Economic security is the core for human and military security,” he said.

Talking about the country’s external relations, the NSA said that the agenda of this security policy is peace with “neighbouring and other countries.”

“We have identified the diversity, we want to build unity around them.”

Explaining the policy, he divided and explained the important points under each security category, including human security, population, health, climate, water, food and gender, sovereignty and military.

He said that the process started in 2014 and the 100-page document has been compiled with the help of federal ministries and civil and military bodies.

“The question people often ask is what happens after the policy?” he said. “The best part is that the National Security Committee has also prepared an implementation plan and, every month, there will be a follow-up meeting which prime minister Imran Khan will monitor”

“This policy is like an umbrella, under which all sector and strategic policies will remain and will be implemented,” he added.

Pakistan’s first-ever National Security Policy (NSP) 2022-2026 was approved on Monday, with Prime Minister Imran Khan terming it a “historic moment” for the country.

The NSP was approved during the 36th meeting of the National Security Committee (NSC), which was chaired by the prime minister, according to a statement from the PM Office.

Opposition has no guts to overthrow govt: Fawad

Taking over the conference, Fawad Chaudhry said that the Opposition parties did not have the guts and prowess to overthrow the present democratically-elected government with their so-called protest movement.

Replying to questions during the media briefing on the decisions of the Federal Cabinet meeting chaired by Prime Minister Imran Khan, he said for agitation in politics, there was a need of leadership which the opposition lacked.

“The opposition leadership can give their party workers only false hope.”

Fawad said an opposition leader like Imran Khan was needed who really upset the then government with his bold and courageous leadership adding most of the political leaders in opposition were ‘daily-wagers’ who only wanted to pass time.

The minister said JUI-F chief Maulana Fazal was giving timelines to topple the government for the past three years.

He recalled that when the PTI came to power, Maulana Fazal in the very first year reached Islamabad along with his supporters with the false hope to topple the government.

“Since then, he has been postponing his plans.”

About Rana Shamim’s affidavit in the Islamabad High court, Fawad said it was “proved beyond any iota of doubt that how big of a Sicilian mafia Nawaz Sharif and family were.”

He said Nawaz Sharif would never return home voluntarily, rather the government would bring him back after the finalisation of the agreement with the UK government.

To another question, he said that no mini-budget was in the offing as only adjustments would be carried out.

He said that the government was forced to go to the International Monetary Fund (IMF) due to the loot and plunder of former regimes of Asif Zardari and Nawaz Sharif.

He said the opposition instead of mere point-scoring, should come up with an alternative solution if they had any.

He said the bill would be presented in the ongoing session of the Parliament as an initial discussion on the draft was held in the Cabinet meeting.

The Minister said the meeting approved the constitution of a Joint Investigation Team to probe the murder case of Nazim Jokhiyo.

A few months ago, Nazim Jokhio was allegedly tortured to death for recording a PPP MPA’s hunting expedition of the houbara bustard.