INGLEWOOD, Calif. — Suzanne Ekeler is late. The game between the Los Angeles Chargers and New York Giants is still an hour away but she got caught up in the SoFi Stadium parking lot talking to other parents of players and, well, one thing led to another and “you know.”

Ekeler, the mother of Chargers dynamo running back Austin Ekeler, rushes to get to her seat almost as fast as her son does on the field. She moves up a section from where she was originally seated because too many people at her field-level seats were in the way of the game, which she watches with unabashed passion and pride.

She is wearing a blue Chargers T-shirt with the No. 30 — Austin’s number, of course.

“What’s it like walking into the stadium knowing he’s going to play?” she says, repeating a question posed to her. Suzanne pauses to carefully consider her answer. She responds with an answer that just about any other mother in her position would give, that she’s just happy to be in a position to be at SoFi to see Austin play.

And with that, she scurries down to her seat in the front row with Austin’s girlfriend, Melanie Wilking, and gets ready to cheer her heart out.

There’s been a lot for Suzanne to cheer about, especially in this, Austin’s fifth season. Heading into Thursday night’s showdown with the division-leading Kansas City Chiefs at SoFi Stadium (8:20 p.m. ET, Fox/NFL Network), Ekeler has rushed for 730 yards on 161 carries and scored nine touchdowns, including four against the Pittsburgh Steelers on Nov. 21. He also remains a big part of the Chargers’ passing game, with 58 receptions for 535 yards and seven touchdowns. His 16 total touchdowns are tied for second in the NFL.

And he — along with a myriad of talented receivers and quarterback Justin Herbert — have the Chargers (8-5) in the thick of the AFC West race, a game behind the Chiefs (9-4) and holding a previous victory over Kansas City in September.

It marks the latest stop of a winding journey for both Austin and Suzanne.

Suzanne has been cheering for Austin long before he became an NFL star, dating from when he started playing football in high school. Times were tough for the family then, but she was always there for Austin and his half-brother Wyett, who is currently a safety at the University of Wyoming.

Ekeler is a renaissance man, but prefers to call himself a warrior. It’s how he’s lived his life, fighting for everything he’s gotten, fighting to prove himself. Fighting through a tough relationship with his stepfather and doing unbelievably difficult chores on his family’s ranch in Eaton, Colorado, such as putting in fence posts and breaking the ice in the water tanks so the animals could drink.

“His time with his stepdad was the hardest on him,” Suzanne says. “It was rough on all of us.”

At 5-foot-8, 195 pounds, Ekeler has always been counted out. It started in high school, then continued in college — where he wasn’t highly recruited and went to Division II Western Colorado (then called Western State Colorado University). It proceeded to the NFL, where he went undrafted in 2017 and was a longshot to make the Chargers in training camp.

But Ekeler kept working hard toward his goal — not necessarily to prove everyone wrong, but to prove himself right. Many Chargers say he’s the strongest player in the weight room and on the field. The way he pushes and bowls people over backs them up.

“Never count him out,” said safety Derwin James Jr., who worked out alongside Ekeler last season when both were injured. Ekeler injured his hamstring and knee so severely in a Week 4 loss to the Tampa Bay Buccaneers last year that he had to walk backwards to get around his own home immediately after the injury.

But he remained undeterred, thanks to how he was raised by Suzanne, who is a real estate agent near their current hometown of Windsor, Colorado, when she’s not criss-crossing the country to see her boys play football. And that inspiration goes beyond proving doubters wrong on the football field.

It’s a sunny warm Tuesday, which in a normal game week is the Chargers players’ day off, and Austin is at Edwin Markham Middle School in the Watts neighborhood of Los Angeles, surrounded by community leaders and students. He has donated a washer and dryer to the school so the students, many of whom have no means to do laundry and often are too embarrassed to even go to school, have a way to wash their clothes.

We are feeling super grateful for @chargers running back @AustinEkeler, @ECOSCleans and @wattsStix for installing a new washer and dryer at @newmarkham for #GivingTuesday. Thank you for your leadership, generosity and commitment to our scholars 💙 pic.twitter.com/YB8GRML9bs

He partnered with Stix, a rapper and Watts community leader who is the founder of the Thinkwatts Foundation, to present the laundry equipment to the school. Stix was appreciative of Ekeler’s helping hand.

“It gives you a certain type of confidence knowing that you are clean,” Stix said. “It opens your mind to certain possibilities and not be focused on something as simple as, ‘Do I smell?'”

“It’s offering them the type of security to feel comfortable in their own skin,” said Ekeler. “I’m 100% in on this project when I heard about it and glad we were able to get it done.”

This was several months after Ekeler built a state-of-the art fitness center at Santa Barbara High School, a school in which 70% of the students are on free lunch programs. And before that he donated bags of toiletries and other goods to the Downtown Women’s Center in Los Angeles, which serves the homeless.

Giving back has been a priority for Ekeler, especially after he signed a four-year, $24.5 million extension in 2020 that included $15 million guaranteed, which he called “a little overwhelming, but also a little relief at the same time.” 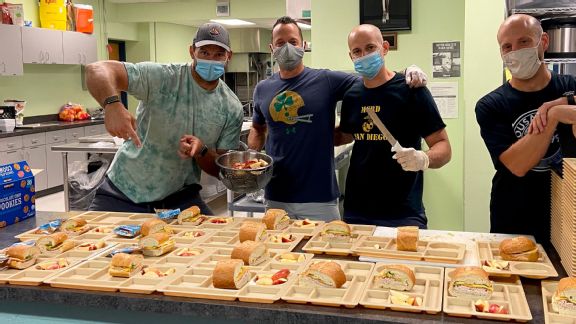 Ekeler has been propelled onto the big stage. Not bad for the little guy nobody believed in, except his mom. And, of course, his family and friends; a dozen or more are expected to be at SoFi Stadium on Thursday, where Ekeler will prove his toughness yet again.

He planted wrong on his left ankle against the Giants and had to get it taped on the sideline. Chargers coach Brandon Staley said Ekeler could have gone back into the game, but they decided to rest him for Thursday night vs. the Chiefs.

Since then he’s been getting treatment round the clock.

Ekeler promises to be ready. And you believe him when he says that. As James said, never count him out.