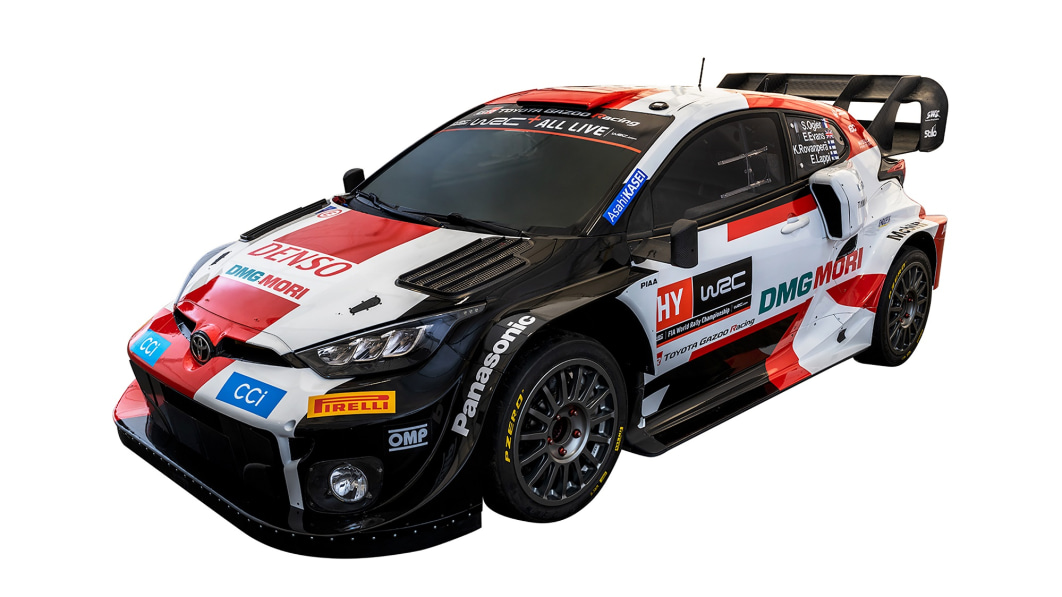 The new regulations coming into effect for the 2022 season of the World Rally Championship (WRC) bring together two of Toyota’s areas of expertise: hybrid technology and racing. The Japanese firm unveiled the gasoline-electric Yaris it designed to compete on dirt, snow and ice.

Loosely shaped like the Yaris hatchback sold in global markets, the Rally1-spec car is built on a dedicated spaceframe chassis. It’s a two-door model, like the street-legal GR Yaris, and it features a full body kit that includes a front splitter, flared wheel arches, plus a gigantic rear wing. The last-generation Yaris rally car wore a similar body kit, but the Rally1 gains a pair of pod-like vents mounted on the quarter panels.

This outgrowth is a side-effect of going hybrid; the vents channel cooling air to the 3.9-kilowatt-hour battery pack. Power for the Yaris comes from a plug-in hybrid system that also includes an evolution of the outgoing car’s turbocharged, 1.6-liter four-cylinder engine and an electric motor. Toyota pegs the Rally1’s output at over 500 horsepower. And, keeping in line with the new regulations, the Yaris gains a mechanical shifter and loses its active center differential. These changes will put each driver’s rallying skills to the test, according to the company.

After months of testing in a variety of conditions, the Yaris Rally1 is finally ready for its first race. It will make its competition debut at the 2022 edition of the Monte-Carlo rally, which takes place in the lower part of the French Alps between January 17 and 23. Toyota is the reigning champion in the series, and the Yaris will need to beat the Hyundai i20 N Rally1 and the Ford Puma Rally1 for the company to keep its title.

“Rallying is entering a very new era and it’s a very exciting moment. There are a lot of question marks and the Monte-Carlo Rally will be giving us some of the answers. As a team, we have been working very hard to be ready, but nobody can know how the different cars compare against each other until we get to the first rally,” noted team principal Jari-Matti Latvala. “We might also see a difference between the drivers who feel the most confident with their new cars and those who will still be finding that confidence,” he added.