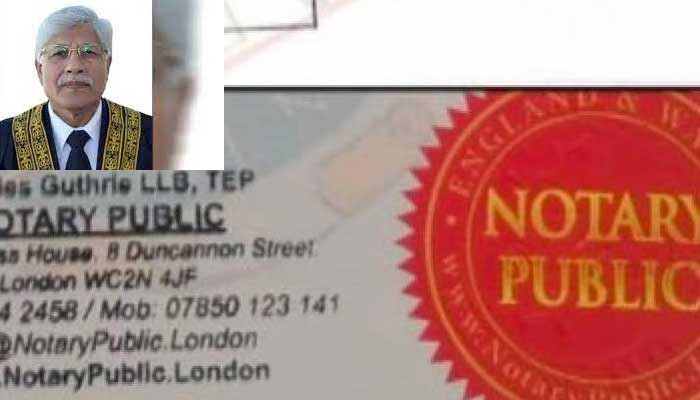 ISLAMABAD: The Islamabad High Court (IHC) received the original affidavit of former chief Judge of Supreme Appellate Court Gilgit-Baltistan Rana Shamim on Monday. According to court sources, the IHC Registrar received sealed envelope couriered from London and resealed the package. The sources said that the sealed envelope would be opened during hearing next Monday, reported Geo News.

The court sources said that the package was marked as “confidential” which could be opened only by IHC chief justice. Earlier, during the hearing in the day, the IHC deferred till December 20 the framing of contempt charges against former chief judge of Gilgit-Baltistan Rana Shamim and adjourned the hearing on an affidavit drafted by the former chief judge in which he had levelled serious allegations of judicial manipulation by ex-top judge of Pakistan Saqib Nisar.

Shamim had to submit a notarised original copy of the affidavit during Monday’s hearing as per an earlier order of the high court, in which it had warned the former jurist that he had till Monday for the submission and his failure to comply would invite an indictment on contempt of court charges.

At the outset of the hearing, CJ Minallah remarked that an attempt was made to make the public lose trust in this court, as he referred to the report published by The News.

“An impression that the report concerning the affidavit gave shouldn’t be given,” CJ Minallah said, adding that the court will not tolerate it if it comes to betraying people’s trust in this court.

He said that the court is conducting hearings on the cases for compliance of orders passed by the International Court of Justice. “How is a court supposed to deal with cases of fundamental rights if the people don’t have confidence in it?” he asked.

The court asked the parties to justify the publication of the story in light of international laws. “An agency has an editor and editor-in-chief to keep a check on things,” Justice Minallah remarked.

Pakistan Federal Union of Journalists (PFUJ) Secretary-General Nasir Zaidi stated that Ansar Abbasi is one of the “best journalists whose reports are based on facts”. “[The issue] should be published if the one who recorded the affidavit is confirming its authenticity,” Zaidi said.

At this, the court inquired if the document should still be published even if it is confidential. “Ponder over the headline of the news story published,” Justice Minallah said, adding that reporting cannot be done this way on under-trial appeals.

An inquiry against the notary public can be initiated over the leak of a privileged document. During the hearing, Attorney-General of Pakistan Khalid Javed Khan requested the court to direct Shamim to submit the original affidavit, and Abbasi and others to submit their counter affidavit in court.

The AGP apprised the court that Shamim has claimed to have couriered the original affidavit on December 9. “It should take three days in sending the affidavit,” he said.

He also read out Shamim’s response on the show-cause notice issued to him and quoted Shamim as saying: “I would have released the affidavit to media after recording the affidavit in Pakistan if maligning the judiciary was intended.”

The AGP asked those who have received a contempt of court notice to submit their counter-affidavits in court. “Shamim’s original affidavit will also be received by then, after which the process of the indictment of accused will be started,” the AGP stated.

The jurist is facing a contempt of court case in the IHC for accusing the former CJP of having issued directives to keep PMLN supremo Nawaz Sharif and his daughter Maryam Nawaz in jail till July 2018 polls.