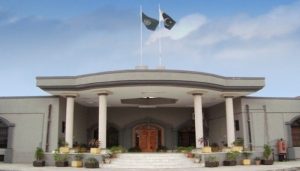 The Islamabad High Court (IHC) set aside on Thursday an earlier decision by its single bench, which had directed the Election Commission of Pakistan (ECP) to decide the prohibited funding case against the Pakistan Tehreek-e-Insaf (PTI) within 30 days.

IHC Chief Justice Athar Minallah partially accepted the petition. The two-member bench headed by Justice Minallah hoped that the election watchdog would decide the case against other political parties in an appropriate timeframe and in a transparent manner.
“We do not doubt that the ECP will treat all parties equally,” the verdict announced. The order said the ECP had not issued any order as of now and that the official of the ECP assured the court that the watchdog would pursue cases against all political parties.
Last week, the IHC issued notices to the ECP and other parties named in the intra-court appeal of the PTI against the electoral body’s decision to conclude the foreign funding case before deciding other cases.
A two-judge bench, headed by Chief Justice Athar Minallah and comprising Justice Babar Sattar, was hearing the party’s plea alleging that the ECP by singling out the PTI expedited scrutiny of its fund while showing leniency towards other political parties.

Although the PTI could not secure an immediate breather in the case, the court nonetheless directed the parties to submit their replies and fixed the intra-court appeal along with other pleas.

PTI’s counsel Anwar Mansoor appeared before the court and told the bench that while the ECP was holding hearings daily against the party, cases of other political parties were not being heard at such a rapid pace.

In April, the PTI challenged the IHC’s order to the Election Commission of Pakistan (ECP) to decide on the prohibited funding case within 30 days.
Justice Mohsin Akhtar Kayani had issued a judgment upholding the ECP’s decision to give access to the case’s record to the PTI’s founding member Akbar S Babar and not to remove him from the proceedings.
The funding case against the PTI was filed by its founding member Akbar S Babar in 2014. He had alleged serious financial irregularities in PTI funding from abroad.