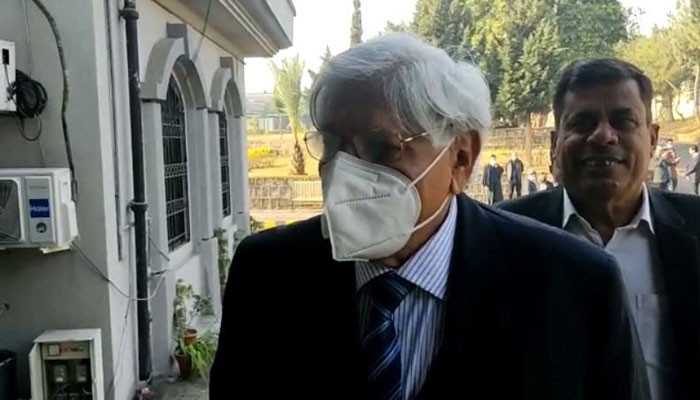 ISLAMABAD: The Islamabad High Court (IHC) Tuesday decided to indict former Gilgi-Baltistan chief judge Rana Shamim, and the co-accused — Jang/Geo Group Editor-in-Chief Mir Shakil-ur-Rahman, The News Editor Aamir Ghauri and The News Editor Investigations Ansar Abbasi — on January 7, 2022 in a contempt of court case, pertaining to the publication of an affidavit containing serious allegations against former chief justice of Pakistan Saqib Nisar. Shamim drafted the affidavit, accusing the former top judge of Pakistan of judicial manipulation, Geo.tv reported. The latest development in the case came during a hearing, headed by IHC Chief Justice Athar Minallah on Tuesday. The court announced January 7, 2022, as the date for indictment of the accused.

“Why shouldn’t the court decide to indict him in the contempt case?” IHC CJ Minallah asked during the hearing.

At the outset of the hearing, the sealed envelope containing Shamim’s affidavit, which was received by the IHC last week, was presented in the court.

Attorney-General for Pakistan Khalid Javed Khan said that Rana Shamim had to inform the court before whom he notarised his affidavit and who leaked it.

“The one who drafted the affidavit should open it,” the attorney general said.

The court then directed Shamim’s counsel, Lateef Afridi, to open the envelope.

“The court wants the envelope to be opened in your presence and for you to see what is inside, yourself,” the IHC CJ remarked.

Afridi said that he will not open the affidavit. “It had been sought by the court, therefore, it must unseal it,” Afridi said.

“We received this [envelope] through courier, but we never knew what it contained,” Justice Minallah said.

“Your client [Shamim] had it sent [from London] through a courier service, so then why are you hesitating to open it,” he asked.

The court directed Shamim to unseal the envelope after which the sealed envelope was handed over to the former GB judge.

Rana Shamim said he confirms that it was his affidavit which he had personally sealed. However, he said, “the courier service didn’t seal the affidavit but the envelope in which the sealed affidavit was put [to be sent]”.

Justice Minallah said that Shamim’s response that had been submitted in court earlier had placed the entire burden on journalist Ansar Abbasi.

“He [Shamim] also said that the document could have been leaked by the notary public,” the IHC CJ said, adding that the matter was not limited just to former CJP Nisar.

“The affidavit has cast doubts on the court. It is a statement which everyone is considering the truth,” Justice Minallah said.

He asked Abbasi if he wants to say anything, to which Abbasi replied that he had a talk with Shamim before the news story’s publication.

“He [Shamim] may be unable to recall properly and is forgetting, but I have explained this in my story and I have his text message as well,” Abbasi said.

While presenting his arguments, the AGP said that Shamim committed contempt of court.

Without naming anyone, the AGP said: “It is being reported for the last three days that the affidavit was recorded in someone’s office.”

“Surprisingly, no statement of denial of [the reports] has been issued,” he said, moving the court to indict all the accused in the case.

At this, the court decided to frame charges against the ex-judge of GB and others on Jan 7, 2022.

Earlier, former Gilgit-Baltistan chief judge Rana Shamim said he was alone when he recorded his affidavit in London.

When a journalist asked Rana Shamim whether it was true that he was accompanied by PMLN supremo Nawaz Sharif when he notarised his affidavit, Rana Shamim denied it, saying “You should ask this question from those who are claiming this.”

The journalist asked if Rana Shamim had provided the affidavit on his own.

“Of course,” the former judge stated, adding that he was alone while notarising his affidavit.