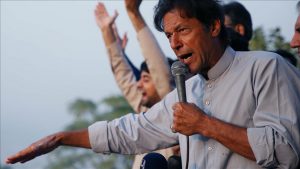 The former prime minister and PTI Chairman Imran Khan have earned widespread praise for highlighting the human rights violations in Indian Illegally Occupied Jammu and Kashmir (IIOJK) despite being interrupted several times by DW’s anchorperson Richard Walker.
While talking about the Russian invasion of Ukraine, Imran reiterated that he was anti-war and never supported military action to solve any dispute.
When the former PM highlighted the Kashmir dispute and the West’s double standards on it, the anchor interrupted him several times, but he continued speaking on the issue.

“What about Kashmir… India has usurped the rights of Kashmiris… Kashmir is a disputed territory between Pakistan and India,” he remarked while seemingly perturbed Walker continued to stop the former premier from speaking. “I first want to move on and talk about Kashmir… this issue involves us and matters to us… what about other people not worrying about our human rights. Why we are supposed to condemn the European issues… don’t put us in a position where we have to take sides… allow us the luxury to stay neutral,” he remarked.

Meanwhile, people from all walks of life, including PTI leaders and journalists, praised Imran for taking a principled stance on the Kashmir conflict.