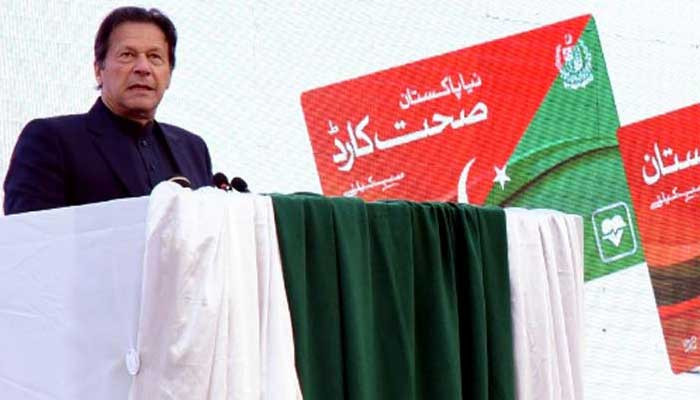 LAHORE: Prime Minister Imran Khan Monday addressed the launch ceremony of the government’s Naya Pakistan Health Card initiative in Lahore and said that it would be handed over to citizens from the first of January next year.

In order to please God, one has to serve mankind, the premier said, adding: “Most people are unaware of the concept of Riyasat-e-Madina, or the Islamic welfare state.” Shedding light on how important it is for a country to have the modern and state-of-the-art medical infrastructure, the PM said that when his mother was diagnosed with cancer, his family had to take her abroad for treatment.

He said that the event pushed him to establish a cancer hospital in Pakistan where people, especially the poor, could go for treatment free of charge. The prime minister said that the country is required to spend Rs100 million per year to run the health system. He also promised that by March 2022, all families in Punjab will have access to health cards.

“The Naya Pakistan Health Card is not merely a form of health insurance but represents an entire health system,” he said. Towards the end of his address, the premier went on to praise his government’s policy of imposing smart and micro-smart lockdowns as opposed to a full-fledged lockdown during the coronavirus pandemic and said that the entire world praised Pakistan for that. However, he added, the Opposition continued to criticise his government.

It should be recalled that last year, the premier had launched a similar health insurance scheme in Khyber Pakhtunkhwa — an initiative that aimed to provide Rs1mn insurance to every family in the province by January 2021.

Chief Minister Punjab Sardar Usman Buzdar also called on Prime Minister Imran Khan here and briefed him in detail about the political situation in the province, administrative matters as the ongoing operation against the hoarders across Punjab.

The PM was also briefed about the law and order situation in the province as well as the measures taken to improve governance. Chief Secretary Punjab Kamran Ali Afzal, Inspector General of Police Rao Sardar Ali Khan and Principal Secretary to Chief Minister Amir Khan were also present.