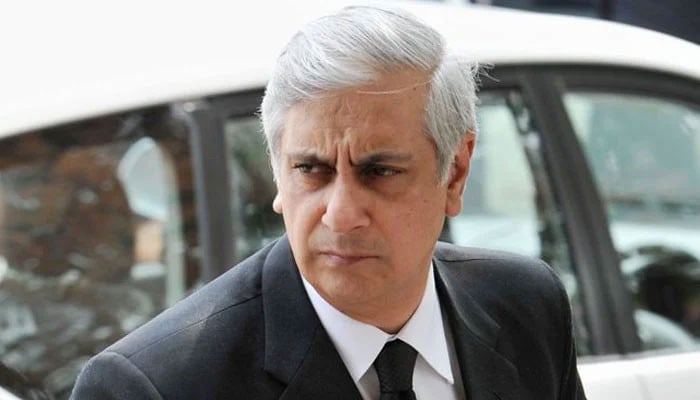 Special Assistant to PM (SAPM) Irfan Qadir said PTI Chairman Imran Khan should also be disqualified as he hid assets because Nawaz Sharif  also was disqualified over the concealment of assets.

The ECP will announce its verdict in the much-delayed Toshakhana disqualification reference against Imran Khan at 2pm today.

PML-N supremo Nawaz Sharif was disqualified for life for hiding unpaid salary from his son in the Panama case, he said, speaking in the Geo News programme ‘Capital Talk‘ on Thursday. Similarly, Imran Khan also concealed his assets, so he should be disqualified in the Toshakhana case, the former attorney general of Pakistan said.

Irfan Qadir, who was appointed as Special Assistant to Prime Minister Shehbaz Sharif on September 29, said the Toshakhana case verdict would have far-reaching repercussions on politics in the country.

Expressing his views in the same programme, the PTI’s lawyer, Gohar Khan, said that Imran Khan would be acquitted in this reference. Gohar Khan said if Imran Khan is wrongly disqualified in the case, the verdict will obviously have implications across the country.

Gohar Khan said that the case proceedings indicate that Imran Khan will be exonerated of the charge unless the verdict is passed under pressure. “We hope that the election commission will think about its status before giving a verdict,” he stressed.

Meanwhile, renowned lawyer Salman Akram Raja said a court of law alone is authorised to give a declaration of ‘Sadiq and Amin’ for a person under Article 62-1F of the Constitution. The ECP, under the law, cannot pass a verdict in this regard, he explained.

According to a notice issued today, the ECP ordered all the relevant parties or their counsels to appear before the commission at its secretariat, situated at Constitution Avenue, G-5/2, in Islamabad.

It should be noted that the ECP had reserved its verdict in the Toshakhana case on September 19 following months of hearings. After hearing the arguments, a five-member bench of the ECP, headed by Chief Election Commissioner Sikandar Sultan Raja, reserved its ruling.

In August 2022, National Assembly Speaker Raja Pervaiz Ashraf sent a reference to the ECP under Articles 62A, 63A, and 223, seeking former prime minister Imran Khan’s disqualification in the light of the Toshakhana scam.

The disqualification reference was filed by Ali Gohar Khan, PMLN’s Mohsin Nawaz Ranjha, and five others.

The 28-page reference identified 52 gift items of Toshakhana received by the former prime minister Khan, violating the law and rules, taken away at nominal prices and most of the gifts were sold in the market, including some precious watches.

According to PML-N MNA Ranjha, Khan concealed information about the gift of watches by Saudi Arabia’s Crown Prince Mohammad bin Salman in his statement of assets submitted in 2018-2019.

This withholding of information is tantamount to lying which, according to Ranjha, is a crime under Section 137. He thus said that Khan was no more Sadiq and Ameen and should be slapped with disqualification for life from contesting the election under Article 62(1)(f), Article 2, Article 3 of the Constitution.

Article 62(1)(f) is the same legal instrument that disqualified former PM Nawaz Sharif from contesting elections and led to his removal from power, Ranjha said.