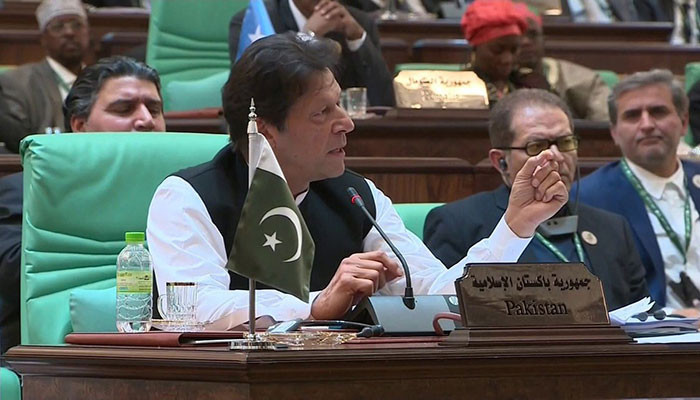 Speaking at the 17th Extraordinary Session of the OIC Council of Foreign Ministers here, he said the people of Palestine and Kashmir want to see a unified response from the Muslim world about their democratic and human rights.

Regarding Islamophobia, the PM said the OIC must play its role to help the world understand the teachings of Islam and “our love and affection for the last Prophet Hazrat Mohammad (Peace Be Upon Him)”. Only by making the Western countries understand the Muslims’ respect and love for the Holy Prophet PBUH, the Islamophobia attempts could be foiled, he added

Separately, Prime Minister Imran Khan appreciated the OIC efforts for peace and stability in Afghanistan and also emphasised the importance of providing humanitarian assistance to the vulnerable Afghan population and the need for economic engagement by the world community.

He met OIC Secretary General Hussein Brahim Taha, who called on the PM on the sidelines of the 17th Extraordinary Session of the OIC Council of Foreign Ministers.

The prime minister welcomed the OIC secretary general on his first visit to Pakistan and thanked him for his participation in the session. The PM expressed his concerns over grave human rights situation in the Indian Illegally Occupied Jammu and Kashmir (IIOJK). While appreciating the OIC’s steadfast support for Kashmiris, he requested the OIC Secretary General for continued advocacy for the resolution of the Jammu and Kashmir dispute in accordance with the UN Security Council resolutions.

The OIC secretary general thanked the PM for his leadership in organising the Extraordinary Session of the OIC CFM to address the humanitarian crisis confronting the Afghan people. He also thanked Pakistan and its people for the warm hospitality extended during his stay in Pakistan.