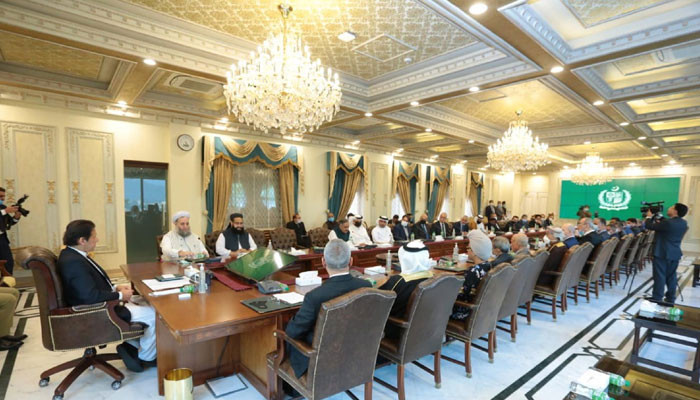 ISLAMABAD: To reverse the moral depravity and declining values in our society– the tragic Sialkot incident being the latest reflection of this trend–Prime Minister Imran Khan is keenly pursuing the National Rahmatulil Aalameen Authority (NRA) to work on a war footing.

“Given the challenge of the downward moral spiral in Pakistan and the damage to the image of Islam, the prime minister is making all-out efforts with complete dedication and prioritizing expert and unbiased opinions,” a government source engaged in the process said.

He told The News that the prime minister, being the patron-in-chief of this noble initiative, has been calling meetings around three to four times a week and directly supervising and pushing for meaningful action by the NRA.

It is said that the prime minister is really upset with the growing incidents of society’s moral and ethical deterioration –from violence against women and children to corruption and widely deteriorating standards of uprightness and character– and believes that society is rapidly accepting norms which are against our religion’s true essence.

The official source representing the NRA, said that the country’s youth, in particular, is diving deep into a bottomless pit and adopting attitudes and values which are alarming. The aim is to teach society in general and the youth in particular about the blessed life of our beloved Prophet (PBUH) and focus on instilling the highest moral values in them which would then translate automatically into successes in every sphere of life.

The source claimed that the prime minister in consultation with the leading ulema of the country and after having discussions with renowned Muslim leaders, took steps to institute a National Rahmatulil Aalameen Authority (NRA). The NRA was established in October 2021 and became functional immediately. By its legal provisions, the NRA has initiated work to highlight and present key elements from the Seerat of our beloved Prophet (PBUH), including peace, empathy, care for others, tolerance, knowledge, progress, wisdom, patience, contentment, ethical behaviour and other prominent aspects from the Prophet (PBUH) life.

The NRA’s objectives include conducting research studies on the Seerat of the Prophet Muhammad (PBUH) and Hadith, the guidance of the young generation, informing about educational and learning processes for better personality development of the young generation and a review of current international literature and research on Seerat from all over the world to make it accessible, translatable and relatable in today’s age.

For these purposes, the NRA will coordinate with provincial entities and international institutes and undertake global, regional and national level events, conferences and dissemination activities around Seerat-ul-Nabi. It will provide a counter narrative against Islamophobia as well as the propaganda against our religion.

The source said that the chairman of the Authority is Dr Ejaz Akram, who is a prominent scholar of religion, a highly acclaimed academic and researcher, and a person of vast knowledge and good connections.

The government source claimed that most of the Advisory Council members are internationally acclaimed academics and researchers on Islam. “They are well versed with the challenges of our youth and understand different influences that impact them. They are in a great position to bring serious scholars, practitioners and media persons to create high-level ripples to highlight the importance of Seerat and guide the NRA to make interventions at the most appropriate level to bring about a positive change,” said the source.

It is said that there are six thematic members of the NRA who will work in areas like research, international linkages, media, curriculum, outreach, and social justice. Combined with the prestigious Advisory Council and the team at NRA,

it is hoped that the efforts and keen engagement of the prime minister– aided by the support of an able and accomplished team which is capable of reaching out and influencing hundreds of millions of young and old people alike at a global level– is going to generate the desired results. “It will be more feasible if other key stakeholders and institutions come to provide strength to this well-meaning project,” said the official.